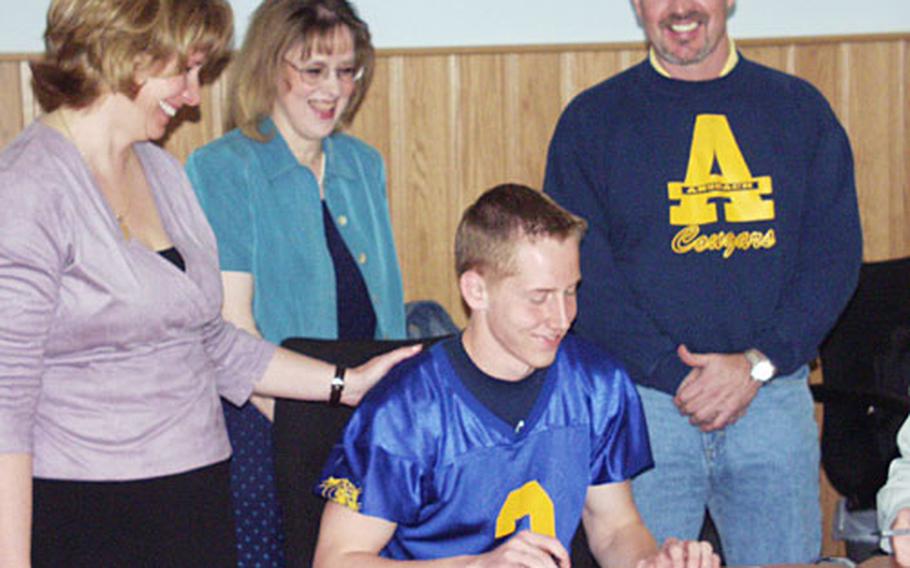 Flanked by his mother, Lisa, left; Ansbach principal Jennifer Rowland, center; and head football coach Marcus George, Garrett Eichhorn of Ansbach High School prepares to sign a letter of intent to play football for the University of Dubuque in Iowa during a ceremony Friday at Ansbach, Germany. (Rusty Bryan / S&S)

ANSBACH, Germany &#8212; Two-time All-Europe placekicker Garrett Eichhorn of Ansbach booted one bit of anxiety into the trash can but teed up another Friday morning when he signed a letter of intent to play football this fall at the University of Dubuque in Iowa.

Based on past performance, Eichhorn, 17, should have few worries. He first appeared on Dubuque&#8217;s radar when he was perfect on a DODDS-record five field goals with Brosius in attendance at Ansbach&#8217;s 43-6 victory over Baumholder in the Division III title game on rain-slicked Minnick Field last November.

&#8220;The longest was 37 yards,&#8221; said Ansbach coach Marcus George, who called the field goals partly to hold the score down against an outmanned opponent and partly to showcase Eichhorn&#8217;s ability to Brosius.

The Spartans, members if the Iowa Intercollegiate Athletic Conference, could use Eichhorn&#8217;s help. They were 0-10 last season.

Partial credit for Eichhorn&#8217;s success belongs to George and Eichhorn&#8217;s father, Leonard, a helicopter pilot who extended his tour in Germany to allow his son to complete his fourth year at Ansbach. The extension allowed George to take the student to Auburn University&#8217;s summer kickers&#8217; camp; however, it also entailed a second deployment to Iraq for his father.

In addition to those milestone moments, Eichhorn&#8217;s father also missed Friday&#8217;s signing ceremony, although he made contact via satellite shortly after his son and Brosius signed the letter of intent.

A soccer player since the age of 3, Garrett Eichhorn didn&#8217;t play football until his freshman year at Ansbach.

When Eichhorn arrives at Dubuque, he might encounter some familiar faces.

None of them, however, is there on athletic scholarship. Dubuque instead offers academic and need-based financial aid.

&#8220;As an NCAA Division III member school,&#8221; read Eichhorn&#8217;s letter of intent, &#8220;the University of Dubuque offers no athletic scholarships. The University of Dubuque supports student-athletes in their efforts to reach high levels of athletic performance &#8212; which may include opportunities for participation in conference, regional and national championship competition.&#8221;