Ansbach makes it 29 in a row 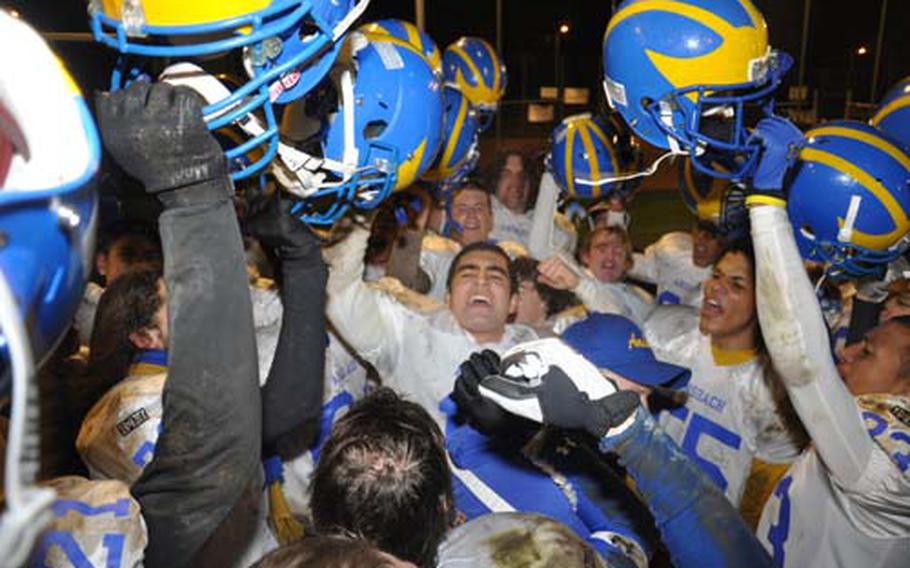 BAMBERG, Germany &#8211; "The Goliath of football," as the Ansbach Cougars were named by Bamberg coach Jim Davis before Friday night&#8217;s showdown with his Barons, couldn&#8217;t have been any closer to the truth.

The Cougars notched their 29th consecutive victory &#8212; a Department of Defense Dependents Schools record &#8212; at Bamberg in a 48-6 game that ended early due to DODDS&#8217; 40-point rule. The game ended after the opening kickoff in the second half was returned for an 81-yard touchdown by All-Europe senior quarterback Dominic Barrale.

It was a perfect night for football, according to the coaches before kickoff. The chilly night air, along with a rain-soaked field, meant the ball would spend most of the time on the ground, and that was no problem for either team.

The opening drive was given to the Barons, who were celebrating their homecoming. They started with a promising drive on the legs of junior running back Javonte Knuckles (76 yards on 14 carries, one touchdown), who ripped through the Ansbach defense for a 46-yard touchdown run.

The thought of a Bamberg upset was short-lived as Ansbach answered with a 48-yard run by senior Shaun Francis.

Francis&#8217; run set up a 1-yard touchdown for Alex Moya. With the confidence Ansbach coach Marcus George had in his offense, he elected to go for two, and got it on a run by All-Europe senior Carter Gunn.

With the score 8-6, Bamberg was looking to get back in the game when Francis broke through the offensive line and brought down the Barons&#8217; quarterback in the end zone for a safety.

Francis wasn&#8217;t done. On the next possession, Bamberg forced the Ansbach offense to third-and-16 in its own territory. With the Bamberg defense expecting a pass, Barrale handed the ball to Francis, who picked up a long first-down run.

Francis&#8217; run led to a 19-yard scoring run by Moya, followed by a failed two-point conversion.

After that, the bottom fell out for Bamberg. Ansbach&#8217;s defense settled in, and the offense scored 48 unanswered points led by Francis, Moya and Gunn, who, combined for 26 carries, 275 yards and four touchdowns.

Bamberg&#8217;s ground attack, which had helped build a 3-1 record, was held to under 130 yards by Ansbach&#8217;s defense, led by Gunn with 10 tackles and two fumble recoveries, one for a 65-yard touchdown in the second quarter. Xavier Jones had seven tackles, including two sacks, and T.J. Prop accounted for 12 tackles, including a sack.

After Ansbach came out in the second with the opening touchdown by Barrale, Bamberg coach Davis elected to end the game, but both coaches agreed to continue playing to give backups experience for the playoffs.

As the coaches met after the game, George told Davis, "We just had a good night." A passer-by was quick to respond, "You have had 29 straight good nights."