Another Rowan becoming center of attention 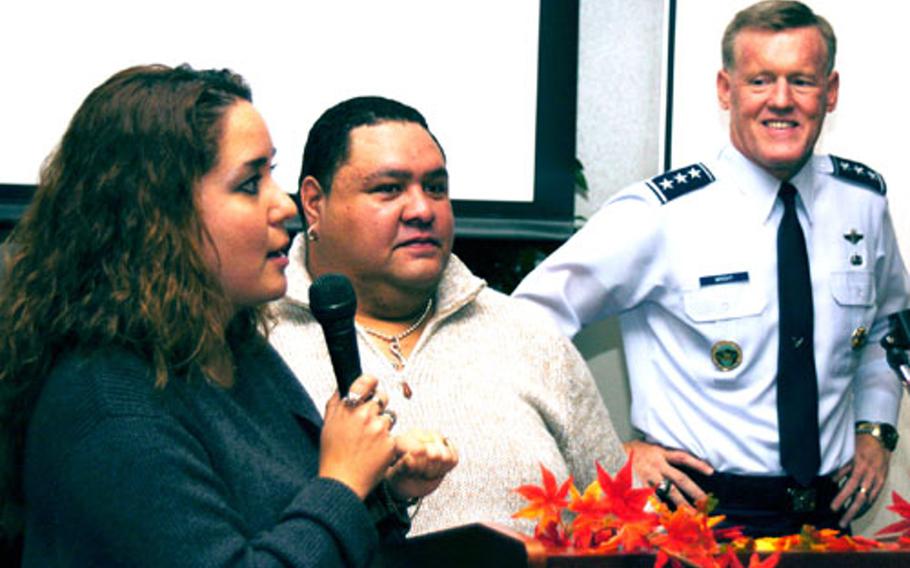 From left, Christine Kalina explains the robes and equipment that her husband, Chad Rowan, better known as Akebono, used in his tournaments for members of the Yokota Officers Spouses Club Nov. 6, 2007, while Lt. Gen. Bruce A. Wright looks on. Rowan, a legendary sumo wrestler, lives around Yokota. (Christopher B. Stoltz / Stars and Stripes)

From left, Christine Kalina explains the robes and equipment that her husband, Chad Rowan, better known as Akebono, used in his tournaments for members of the Yokota Officers Spouses Club Nov. 6, 2007, while Lt. Gen. Bruce A. Wright looks on. Rowan, a legendary sumo wrestler, lives around Yokota. (Christopher B. Stoltz / Stars and Stripes) 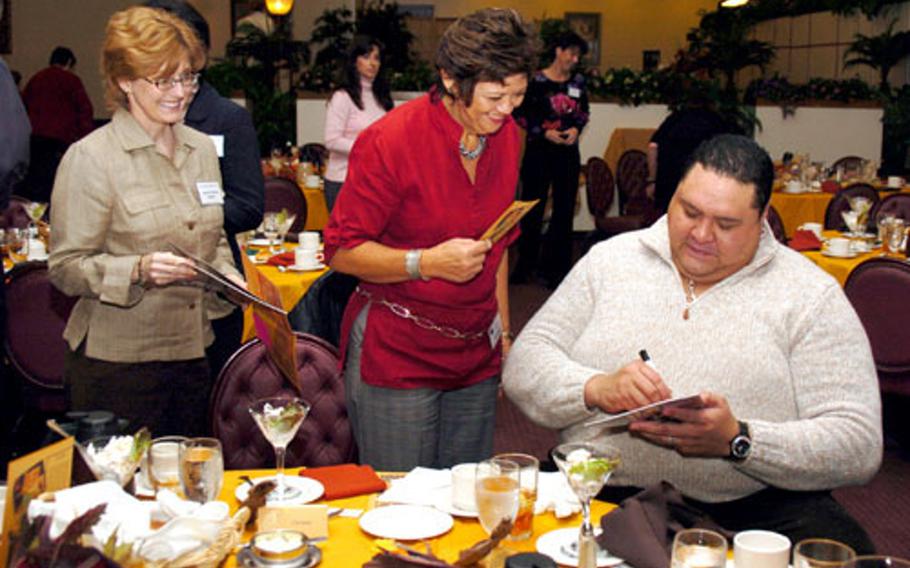 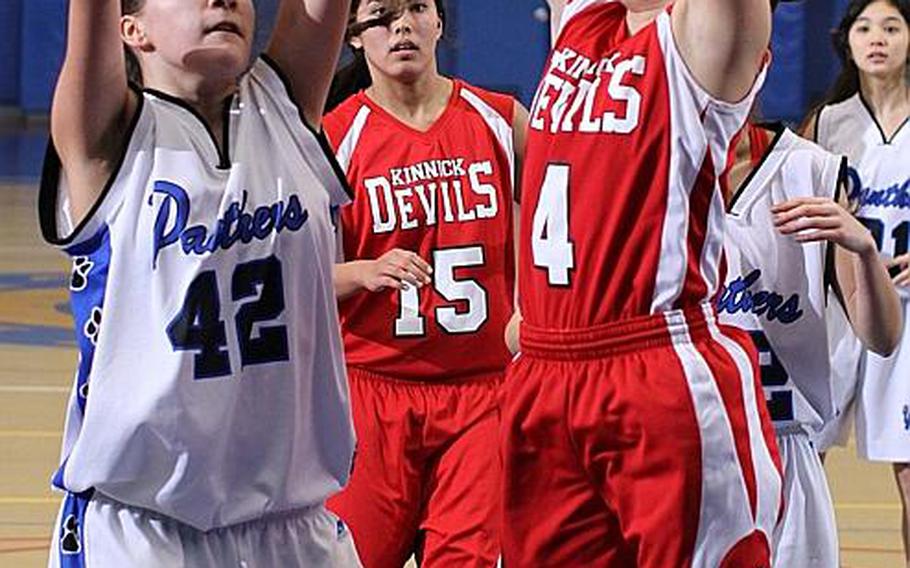 Yokota's Caitlyn Rowan puts up a shot against Nile C. Kinnick's' Charla Johnson during a January game at Yokota Air Base, Japan. Rowan, a sophomore, is the daughter of former Sumo grand champion Akebono (birth name Chad Rowan). Yokota has won five of its last six games and Rowan has played an integral part, averaging 12 points and 12 rebounds in that span. (Tyler Espinoza/Special to Stars and Stripes)

Most DODDS Pacific students are the sons and daughters of servicemembers, Defense Department civilians, contractors or even State Department personnel.

Caitlyn Rowan, a sophomore at Yokota, is in a class of her own.

But while Dad was about as famous as it gets in Japan – and still draws attention just about anywhere he goes – his daughter doesn’t feel she’s much different than her classmates.

“I don’t feel like I get treated in any special way,” she said. “I feel like I’m a normal teen-age girl or at least what I think is normal, I go to school, I do my homework, I play school sports and I have chores to do every weekend.”

At 6-feet tall, Caitlyn is the Panthers girls basketball center and is becoming a cog in a team that’s won five of six games. And it’s likely that she possesses some of her father’s basketball bloodlines.

Chad was on basketball scholarship at Hawaii-Pacific for one semester before being recruited to come to Japan for Sumo. He debuted in March 1988 and almost five years later, Jan. 27, 1993, he became the first foreigner to be promoted to Sumo’s highest rank, yokozuna.

At 6-foot-8 and 514 pounds at his peak, he was one of the heaviest Sumo wrestlers ever. He won 11 Emperor’s Cups before retiring in January 2001. He’s currently on the All-Japan pro wrestling circuit.

When not on the road, the 44-year-old is a regular at Caitlyn’s home games and says he’s proud of her development. She didn’t share her dad’s love for sports at first, he said, “but then coaches approached her and asked if she wanted to play basketball or volleyball.”

“The first year, she would come home, grumble and cry” whenever things didn’t go well on the court. “She started slowly, but now, she’s full swing into it.”

One other reason Caitlyn was reluctant to play sports, Chad said, was the fact that her father was famous and in the spotlight.

Caitlyn says it was more about her not knowing much about basketball.

“I was asked to play for the basketball team” last year by former principal Darrell Mood. “I did it (but) I had no knowledge of the sport last year.”

A year later, Rowan – who spent most of last off-season playing games against boys in weekend clinics at Negishi, near Yokohama – has averaged 12 points and 12 rebounds in the last six games, five of them Yokota wins. The team lost its first six games and is 5-9 overall.

“Now, I’m starting to get it,” Caitlyn said, adding that she learned much from the clinic’s coaches. “I think I’ve improved.”

Through much of last season and this year, she’s played under the watchful eye of her father, who can be vocal at times. That caused some frustration last year, but she’s gotten used to this year.

Because he’s so visible and so noteworthy, Chad Rowan says he has to be careful how he behaves.

“I long ago came to terms with no matter where I go or what I do, I have to watch what I do outside in public,” he said.

Some of Caitlyn’s classmates recognize him in an instant; others simply see him just as the biggest thing in the gym.

“He’s the guy who’s two feet above the rest of the crowd and takes up half the audience,” said Yokota senior Chase Cupp. “I didn’t know who he was until I saw him in the (homecoming) parade last year. I’m like what is that big thing. Like Godzilla.”

“I might suspect he’s a Sumo wrestler, but I wouldn’t know he was a champion,” fellow senior Kerry Dittmeier said.

Cupp says he’s not mustered up the nerve to talk to him. “I’m always too intimidated.”

But observers say the father is as approachable as his daughter is nice.

She’s also well-rounded in other areas – Caitlyn carries a 3.0 grade-point average and has been hula-dancing since she was 5.

As far as her abilities on the court, coach Tim Pujol says he sees limitless possibilities.

“She’s really taken a serious approach” to the game. “She works hard, she has the desire to do better, more maturity in practice, I’ve seen a real rise,” he said, adding that mentoring from assistant coach Kitty Martinez, who works with Yokota’s post players, has been a good match.

“She wants to improve herself,” Pujol said. “For her to be doing what she’s doing as a sophomore is an indicator of the success she can achieve in the future. I think the sky’s the limit.”