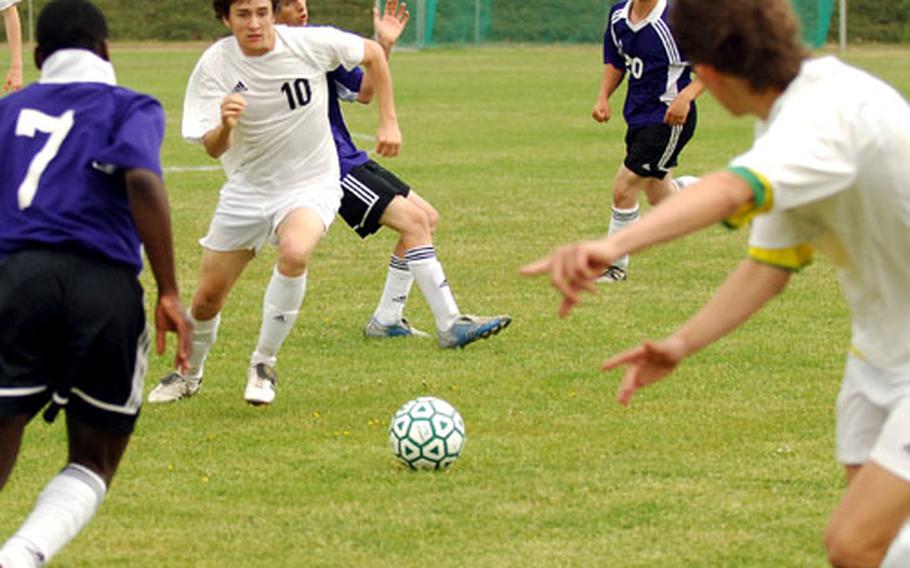 AFNORTH’s Chris Eden (10), who had 11 assists and five goals last year, isn’t trying to score more goals since the departure of fellow All-European David Pohl. “I don’t feel under pressure to score,” he said. (Courtesy of Dennis Owens)

All-Europe first-teamers both, Pohl scored 16 goals and handed out eight assists, while Eden had five goals and 11 assists.

With the departure of Pohl this year, it would seem logical that Eden, a senior, would feel pressured to take up more of the scoring load.

AFNORTH&#8217;s first goal of the season in a 5-0 home victory over Baumholder last Saturday bears out Eden.

&#8220;He put up a beautiful cross from a corner kick, and (James) Perea put his head on it for the goal,&#8221; AFNORTH coach Greg Blankenship said Tuesday night by telephone.

Eden went on to score two goals, both off assists from Hartung, but the pattern was set. Eden would continue to be Eden in 2007.

Blankenship did find more responsibility for Eden, though.

Eden agreed with Blankenship about the need for on-field direction.

Coach Blankenship knows where the team&#8217;s overall leadership is coming from.

Blankenship, who plays Eden all over the field depending on the game situation, said Eden brings his best to the table wherever he sits.

The defensive mind-set carries over when Eden moves forward.

Blankenship thinks Eden, who he said has impeccable soccer skills, will be a welcome addition wherever he goes.