A goal-oriented transition for Bamberg's Wonzina 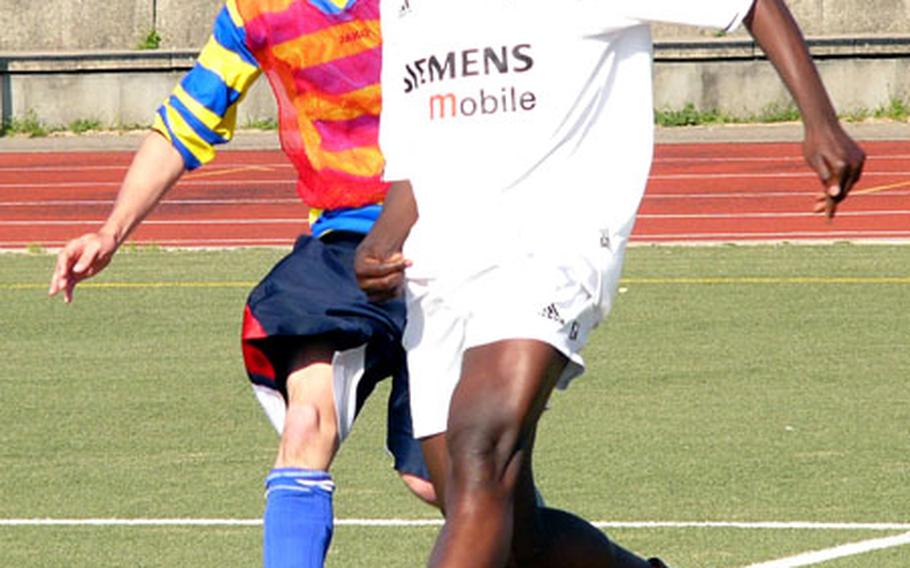 BAMBERG, Germany &#8212; When 16-year-old Collins Wonzina arrived in Bamberg three years ago from Sunyani, Ghana, everything was different from the life he had known in tropical West Africa.

All of a sudden, he was a teenager trying to learn two languages &#8212; English and German. He also had to become acquainted with a different culture, the American lifestyle at Bamberg American High School and the German way of doing things at his local soccer club, FC Bamberg.

&#8220;He just stood and observed at first. Really, his language is soccer, and he realized that soccer was the way to make the things he would like to have happen, happen.&#8221;

It has so far.

Wonzina had little trouble speaking English after a recent practice, but soccer is still the dominant voice in his life.

He has only played parts of four games this season for Bamberg and has 15 goals. Last season he had 20.

Wonzina was also confronted with the chilly dampness common to much of Germany in the spring.

Things were different in German soccer, too.

And very intense. So intense, in fact, that Wonzina said he has progressed enough to try to play professionally, either in Germany or the States.

Wonzina has also helped hone the talents of his teammates, too, according to second-team All-Europe sweeper Christian Peel.

Wonzina thinks the Barons can improve on last year&#8217;s fourth-place finish in the European tournament. As proof, he points to the play of teammates such as Peel, Alex Hodge from St. Maarten in the West Indies, T&#8217;Andre Stuckey, a forward better known as a speedy and determined back on the Barons&#8217; football team, and Paul Maritz, a rugby player from South Africa.