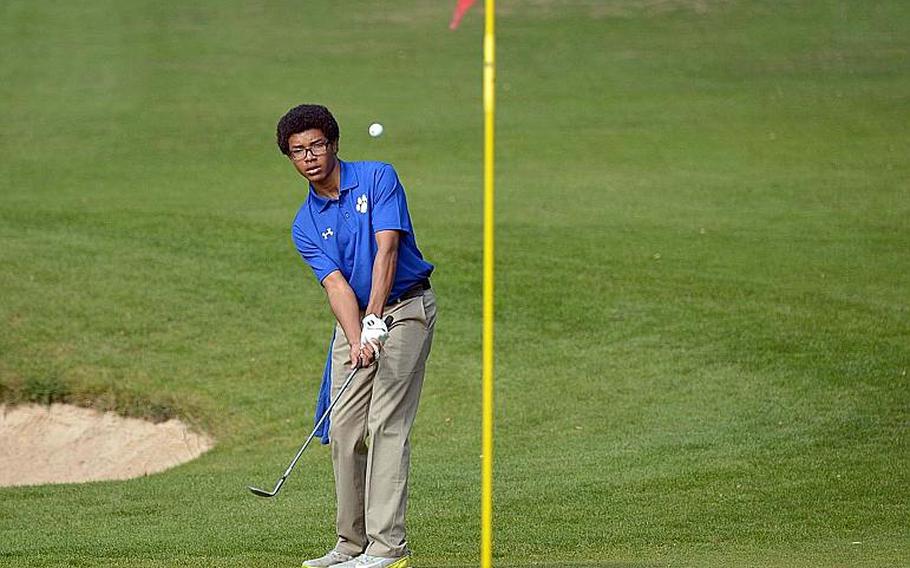 Ramstein's Ben Todman watches his ball fly towards the pin in final round action at the DODEA-Europe golf championships at Rheinblick Golf Course inWiesbaden, Germany, Thursday, Oct. 11, 2018. Todman was third with a 60. (MICHAEL ABRAMS/STARS AND STRIPES)

The first sports championship of the 2019-20 DODEA-Europe school year has arrived.

A roster of 28 boys and girls golfers from across the organization will gather Wednesday and Thursday at Rheinblick Golf Course in Wiesbaden, Germany, to compete for individual and team European titles.

The two-day event brings a close to the shortest season of any DODEA-Europe sport, with a quick three-week regular-season schedule serving to qualify top performers for this week’s main event. In all, 20 boys and eight girls earned the right to contend for the coveted championships in Wiesbaden.

Ramstein ace Ben Todman is the favorite to claim the boys individual title. The junior averaged 48 points per meet over the fall, putting him six and a half points ahead of his nearest challenger, Wiesbaden freshman Clayton Shenk, in the sport’s modified Stableford scoring system. Todman also ranks as the event’s highest-finishing returnee after a third-place showing last year.

The Royals are also heavy favorites to repeat as European team champions as Ramstein golfers fill out the rest of the top five seeds entering the tournament.

The girls’ field, meanwhile, expands to eight this fall after just four golfers made the cut for last year’s event. The contenders come from six different schools, setting the stage for what should be a competitive battle for team supremacy.

A pair of tournament veterans headline the field. Vilseck senior Anniston Fees, last year’s fourth-place finisher, is the favorite entering the tournament with a season average of 30.3 Stableford points. Ramstein junior Harley Parks, who finished third in Europe a year ago, clocked in just off that pace at 27.3 points.