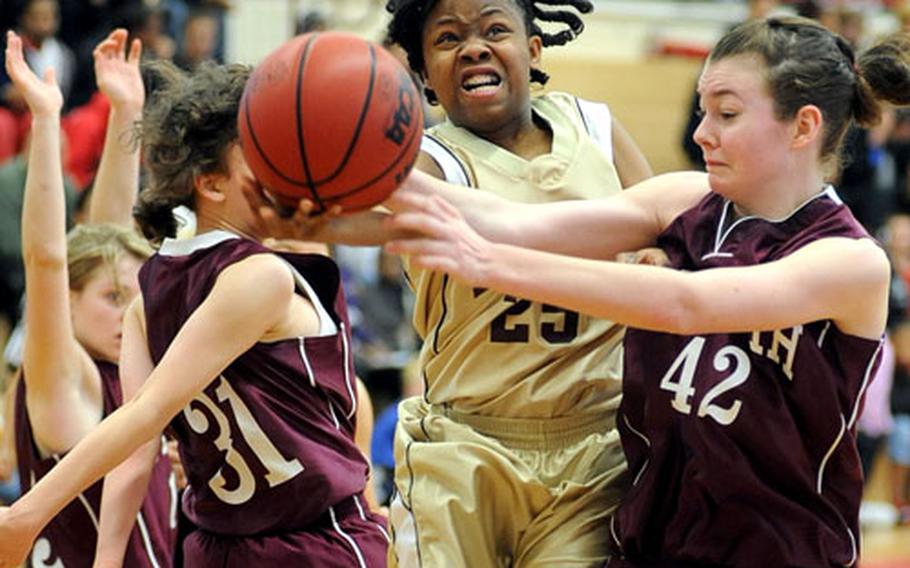 Baumholder&#39;s Veronne Clark attempts an underhand layup between AFNORTH&#39;s Brenda Broadwater, left, and Natalie Everingham in the girls Division III final of the DODDS-Europe basketball tournament in Mannheim in February. Clark was named to the All-Europe first team for the second-straight season, while Broadwater made the second team. (Michael Abrams / S&S file photo)

For most of the players chosen for the 2009 All-Europe girls basketball first team, it&#8217;s a case of ditto marks.

After investing 12 months of work, sweat and sacrifice in improving their games, Bethany Walcott of Division IV champion Rota, Veronne Clark and Elizabeth Styles of two-time D-III champ Baumholder, Alyssa Lane of D-II champion Aviano, Ashley Hicks of D-I champion Heidelberg and Kiara Sanchez-Herrera and Latanya Wilson of Kaiserslautern find themselves back where they were last spring &#8212; on the All-Europe first team.

For Walcott, Wilson and Hicks, it&#8217;s a case of double-dittos. All three were selected to the first-team as sophomores in 2007.

Near-dittos apply to another first-teamer. Fallon Puppolo of Heidelberg, a second-team All-European as a sophomore and junior, moved up to the first team, leaving behind three second-team teammates from 2008: Ebonee DeVos of SHAPE, Lataiya Harrison of Ramstein and Valentina Lee of Naples.

With so much talent returning, picking this year&#8217;s All-Europeans could have come down to a mere case of fill-in-the-blanks.

It didn&#8217;t, said selector Campbell, whose Wiesbaden girls went 5-1 in the European D-II tournament in February.

&#8220;I thought the quality and depth of talented players made the selection process very difficult this year,&#8221; he wrote in e-mailed comments on the panel&#8217;s evaluations.

Difficult especially in the sense of finding space for rising stars, such as freshman guard Janelle Loney of Patch, who averaged nearly 14 points a game in her first varsity season; or the Wiesbaden sophomore sister act of LeAndra and LeAmber Thomas. LeAndra cracked the first team; LeAmber, whom Campbell called &#8220;the best rebounder I&#8217;ve ever coached,&#8221; found her niche on the second team.

Don&#8217;t get the idea, however, that second team necessarily means second-best.

Lee, who averaged 20 points per game to tie first-teamer Lane as the All-Europe squad&#8217;s leading scorer, is a second-teamer. So is DeVos, whose 10.8 rebounds per game trailed only the 14 and 12 per game pulled down by Walcott and Hicks, respectively.

The first team is top-heavy with upperclassmen, big-school players and members of European championship teams.

Walcott was the only D-IV player in the top 10; Baumholder sophomore repeaters Clark and Styles the only representatives from Division III. They join Lane of Aviano, and Hicks and Puppolo of Heidelberg as the 60 percent of the top 10 who can hang their All-Europe plaques next to the ones they earned by winning 2009 European titles.

However, all those school-size and success statistics had nothing to do with the team&#8217;s final composition, Campbell asserted.

&#8220;I think this team has loads of talent with good shooters and ball-handlers,&#8221; he wrote in an e-mail. &#8220; A lot of the selections can get the job done offensively and defensively, which makes them fundamentally solid as a group.&#8221;