1st AD soldiers bring the fight to the ring 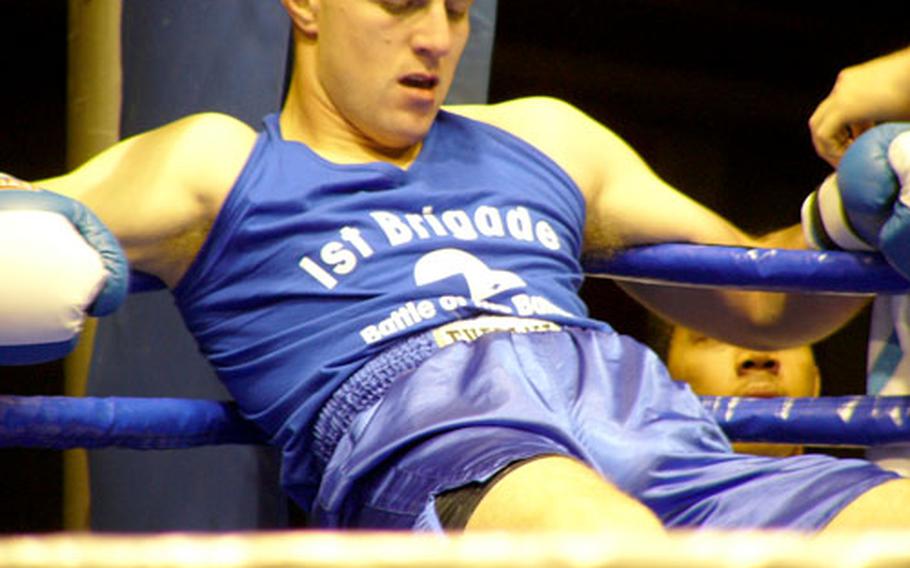 Giessen-based heavyweight Bryan Spalliero rests in his corner following his 2-1 victory over Sergei Volkov of Friedberg during Saturday’s Battle of the Battalions boxing card at Friedberg, Germany. (Rusty Bryan / S&S)

Giessen-based heavyweight Bryan Spalliero rests in his corner following his 2-1 victory over Sergei Volkov of Friedberg during Saturday’s Battle of the Battalions boxing card at Friedberg, Germany. (Rusty Bryan / S&S) 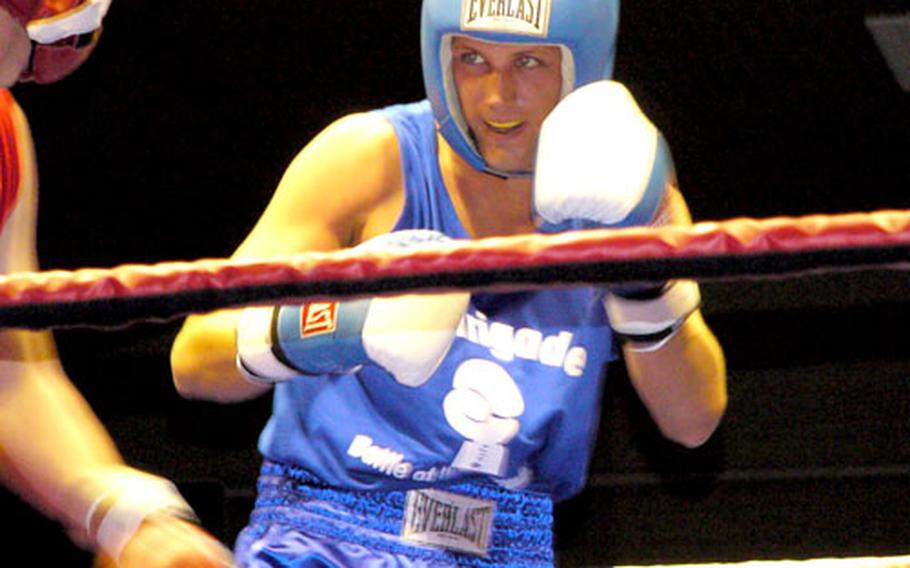 FRIEDBERG, Germany &#8212; Units assigned to the 1st Armored Division&#8217;s 1st Brigade got better acquainted Saturday night by getting into each others&#8217; faces at the Battle of the Battalions boxing card.

&#8220;This gives a chance to know each other,&#8221; said middleweight Keeon Britton after he claimed a 2-1 decision over fellow infantryman Carlos Wright. &#8220;It brings us closer together. You get to know the guys behind the faces you see in the club or downtown.&#8221;

It&#8217;s unlikely that anyone except combat-arms soldiers would celebrate their return from the rigors of field training by hitting the gym, but that&#8217;s exactly what the 1st Brigade soldiers did.

That kind of enthusiasm was evident both in the ring and in a raucous, packed grandstand, which resounded with chants of &#8220;In-fan-try, in-fan-try&#8221; for most of the evening. The spirit was a good substitute for the lack of polish shown by many of the boxers.

&#8220;This is for beginners,&#8221; Britton said. &#8220;For people who have never boxed before, four two-minute rounds is too hard. The one-minute rounds let them experience boxing without getting tired.&#8221;

Relatively speaking, that is.

Spalliero attacked aggressively in the first round, at one point landing three consecutive straight rights to the left ear hole of tanker Sergei Volkov&#8217;s headgear. When Volkov didn&#8217;t fall, however, and kept Spalliero at bay in Round 2 with a stiff left jab, both boxers were reduced to holding on in Round 3.

It was a useful conditioning session for Spalliero, a former Division I college wrestler at Fresno State, who sprawled winded on his stool after his 2-1 victory. Spalliero plans to enter the U.S. Forces Europe wrestling championships Dec. 9-11 in Wiesbaden.

Seven of the bouts ended early. The quickest of them was the showdown between infantrymen Cody Beggs and Chris McClure. Beggs had appeared to have KO&#8217;d McClure 10 seconds into their light middleweight bout, but referee Larry Goodman, himself a former USAREUR boxing champion, ruled that Beggs had used illegal blows to fell McClure and disqualified him.

Battle of the Battalions