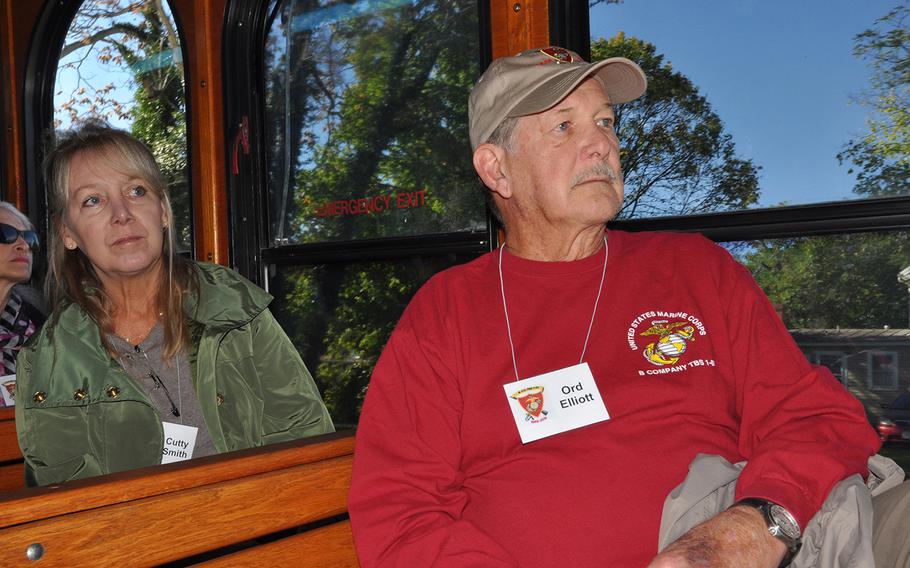 Ord Elliot, right, and his partner Cutty Smith, left, participate in a bus tour of historic Fredericksburg, VA, on Oct. 22, 2016, during the 50th reunion of classmates who attended Marine Corps officer training at The Basic School in1966. Nearly all 184 graduates went off to fight in Vietnam. (Dianna Cahn/Stars and Stripes)

The Marines were in the Demilitarized Zone, with a plan to head north into enemy lines and fight their way back south.

But the North Vietnamese Army had artillery and weapons across the river, and H Company of 2nd Battalion, 3rd Marines, was being bombarded.

“There were no bunkers, no place to go hide,” Ord Elliott said. “You just hit the deck and hoped it wasn’t you.”

Fifty healthy men went in, six came out unhurt. “We were pretty well decimated in that attack,” he said.

Combat is not something you can easily explain to those who haven’t experienced it. It’s transformational, which is why so many fighters came home silent.

“You don’t really know what it’s like till you’ve been fired at for real and your troops and Marines are dying,” he said. That knowledge came crashing down on Elliott when he lost a close friend on the battlefield.

Elliott and Dave Hackett became friends at Princeton, where Hackett graduated a year ahead of him. Three years later, they ended up in the same company in Vietnam. Hackett was the executive officer, Elliott was a platoon commander.

Marine officers who trained at The Basic School in 1966 gathered at the school on Marine Corps Base Quantico, Va., for the 50th reunion on Oct. 21, 2016. They heard from the school's current officers and watched young Marines in training. Dianna Cahn/Stars and Stripes

“He was a wonderful and very respected man,” Elliott said.

They were pinned down by sniper fire and Hackett stood up to see where it was coming from. That act of courage cost him his life. Elliott was beside him when he died.

“That’s where I really understood the full impact of war. It was a great loss for me.”

Elliott was teaching in an MBA program in Oregon a few years later when he suddenly had an overwhelming compulsion to write about his Vietnam experience. So he took a year off work and wrote, the words exploding out of him.

When he was done, he put the manuscript away, choosing to keep it private. Then came the wars in Iraq and Afghanistan, and as he watched what young Marines were going through, the loss and pain of war came back to him.

He’d remained in contact with his Marines and knew many had struggled with PTSD. A member of his platoon and a lieutenant he’d known at The Basic School had committed suicide. He reworked his manuscript, adding his reflections on war and what it does to men. His book, “The Warrior’s Silence,” was published in 2012.

“It’s a blessing, in a way, to understand what combat is, to know what it means in terms of loss, of what it does to you and to other people,” he said.