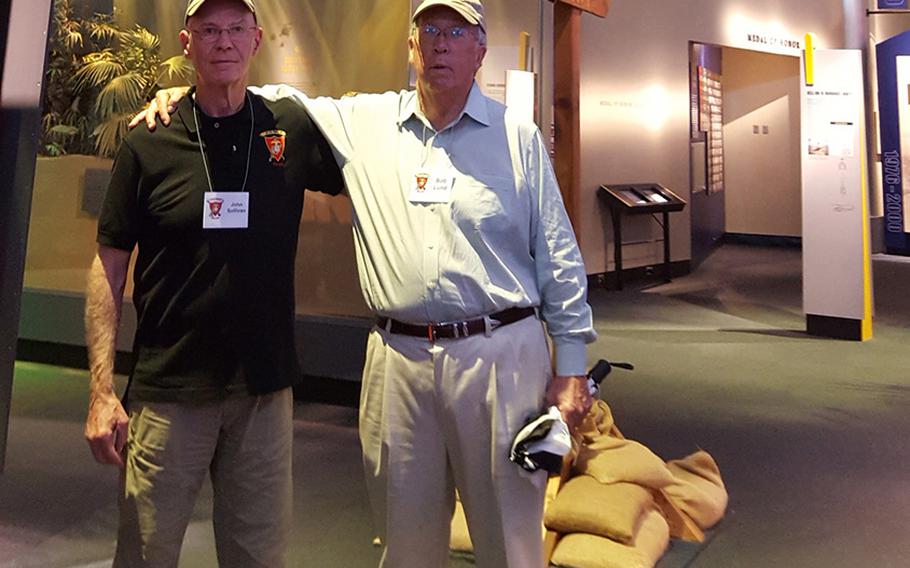 John Sullivan, left and Robert Lund, right, stand underneath the Huey gunship helicopter on display at the National Museum of the Marine Corps in Triangle, VA on Oct. 21, 2016 during the 50th reunion of their class at The Basic School. The two men served in the same squadron in Vietnam, flying Hueys, including the one hanging at the museum. (Dianna Cahn/Stars and Stripes)

They have been friends since The Basic School, through flight school and flew together as helicopter pilots in Vietnam.

“He was with me the day I tried to shoot myself down with a rocket,” said John Sullivan.

The two men flew the iconic helicopters of the Vietnam War, the Huey gunship. In fact, Lund realized that he and Sullivan had flown the exact Huey hanging on display at the Marine Corps Museum at Quantico -- as they stood underneath it.

Later, Sullivan check his log book for the number emblazoned on the tail wing. Sure enough, he flew that very bird 63 times.

On one mission, Sullivan and Lund were tag-teaming to help extract a patrol unit on the ground that had come under heavy fire. The unit’s patrol leader had been killed, and the men were pinned down. The Hueys were giving fire cover so two “lift” helicopters could go in and pick up the men.

Sullivan and Lund alternated flying low over their position and opening cover fire. Sullivan flew in, fired rockets, then pulled up and around as Lund went in, with rapid heavy machine gun fire. As Sullivan flew in for his second pass, something went wrong.

“I hit the pickle switch on the stick (to fire a rocket) and all of the sudden, my head goes down and the windshield explodes in front of me and something hits me on the knee,” he said. He hits the radio mike and tells Lund he’s been hit by a rocket-propelled grenade.

Lund looked over and sees Sullivan’s helicopter wobbling. He was probably trying to figure out what to do, Lund said.

“Either that, or I was scared to death and shaking like a leaf,” Sullivan said.

He looked around and saw an unexploded rocket warhead sitting between himself and his co-pilot. After telling the co-pilot to take the controls, Sullivan rolled down his window, picked up the warhead and dropped it out of the opening.

With a big hole in his windshield, Sullivan went back to flying the mission until the lift birds could extract the trapped men.

On their way back to base, he and his crew chief figured out what had happened. When Sullivan fired his rockets, one warhead separated and flew through the open doorway into the cockpit, hitting Sullivan in the head, then crashing into the windscreen, hitting him on the knee and landing on the floor between the pilots.

Earlier in the deployment, Lund had been flying low alongside a raised mountain road – as the copters did for cover. Suddenly, he saw a Sikorsky H-34 helicopter coming straight at him.

His rotor hit the angled terrain. Suddenly they were rolling down the mountain in the body of the bird.

Lund remembers putting his hands in front of his face, sure he was going to die.

When the rolling finally stopped, he thought to himself “Oh, good, I am OK.” But he remembered stories about guys having broken backs or necks who didn’t realize their injuries until they tried to move.

“So I am afraid to move,” he recalled.

His crew chief shouted that they should get out “before this thing blows.” He climbed out the missing front window and eyed his aircraft.

“The reason we didn’t blow up,” he said, “was this was such a violent crash. We were moving forward, not down and we were rolling so fast that the blades, the rocket pods, the engine, the fuel cell – it all came off. The only thing that was left was the body containing the pilots and crew.”

That, and the fact that the seats did not come loose, were the reasons he survived, Lund said. “But that’s not the end of the story,” Sullivan said.

That night, Lund, Sullivan and the other lieutenants were back at their hooch drinking to his survival. A couple of the men were goofing around and Lund ended up breaking his leg.

“So here he is, he’s just survived an unsurvivable crash and he gets medevaced” for goofing around, Sullivan said.

Lund smiled. His wife visited him while he was recuperating in Guam. Nine months later, their daughter was born.