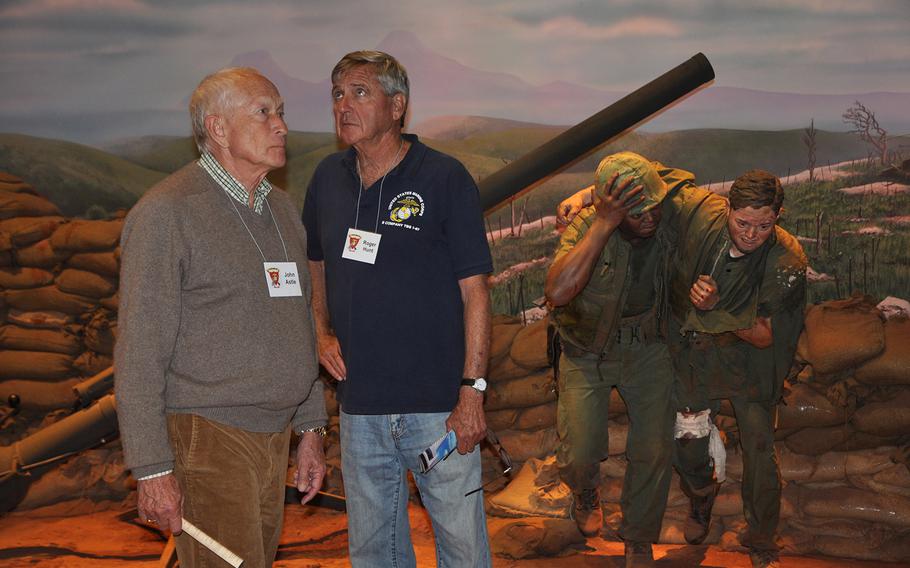 John Astle, left, and Roger Hunt, right, view an exhibit on Oct. 21, 2016 in the Vietnam section of the National Museum of the Marine Corps in Triangle, VA, near Quantico base. The men have been friends since 1966, when they spent five months together at Marine Corps officer training at The Basic School, before they flew CH-46 helicopters in Vietnam. (Dianna Cahn/Stars and Stripes)

John Astle has a video of Roger Hunt, having just come out of battle, dancing next to his aircraft.

In the years since they became friends at The Basic School, Astle and Hunt drank together, went to flight school together, were best men at each other’s weddings and survived combat as CH-46 pilots in Vietnam.

Just a mention of the video takes Hunt back to that 100-day tour in 1969 when the pilot was sent into the jungle with the 1st battalion, 9th Marine Regiment, the heavily hit ground unit known as “the Walking Dead.”

Their mission near the A Shau Valley was to sever the Ho Chi Minh trail and cut off enemy resupply into South Vietnam. It was part of Operation Dewey Canyon and it meant fighting through the heavy jungles in enemy territory. They weren’t “supposed” to go into Laos, but they did, Hunt said.

His job was forward air controller – guiding aircraft when Marines on the ground got into battle and needed evacuation or resupply. He was constantly busy.

The weather was bad, as was the fighting. They took severe enemy fire and, for one extended period, were caught without supplies because the aircraft could not fly into the storms.

Hunt was 50 pounds lighter when he got back to base. Astle snapped a picture of him -- a pilot reunited with his craft.

The ground troops would ask him how he could fly the CH-46 and get shot at all the time. But Hunt was ecstatic to be out of the jungle. “A pilot on the ground is like a duck out of water,” he said.

The first time, he was flying a resupply mission for a unit in battle, watching the tracers turn skyward on the chopper that flew in first.

Then he took his chopper down. “All of a sudden, there was this loud Whack! My knee came up so violently that my knee board broke in half.” The bullet came so close, it sliced through his boot lace and sent shards of metal into his shin.

He could see a hole in the floor and the co-pilot’s microphone had been shot away. They dropped their load and headed back to base.

The second time, they were ferrying troops in a big operation. He was flying in to pick up a second load, when a bullet came flying through the nose of the aircraft.

“It hit my stick, shattering it into a thousand pieces of metal and plastic, then hit the inside of my armored seat, ricocheted, went behind my head and out the glass.”

Later they ran a string from where the bullet came in to where it hit his seat. Had Astle been sitting up straight, the bullet would have hit him in the head.

A few years ago, he donned one of his Purple Hearts in soldiarity at an event for young Iraq and Afghanistan veterans.

“I got there and I saw these kids missing arms and legs – I was so embarrassed,” he said with a quivering voice. “I took it off and put it in my pocket. My wounds were nothing compared with what these kids suffered.”