The Rise and Fall of the Berlin Wall

Fall of Wall paved way for end of Cold War 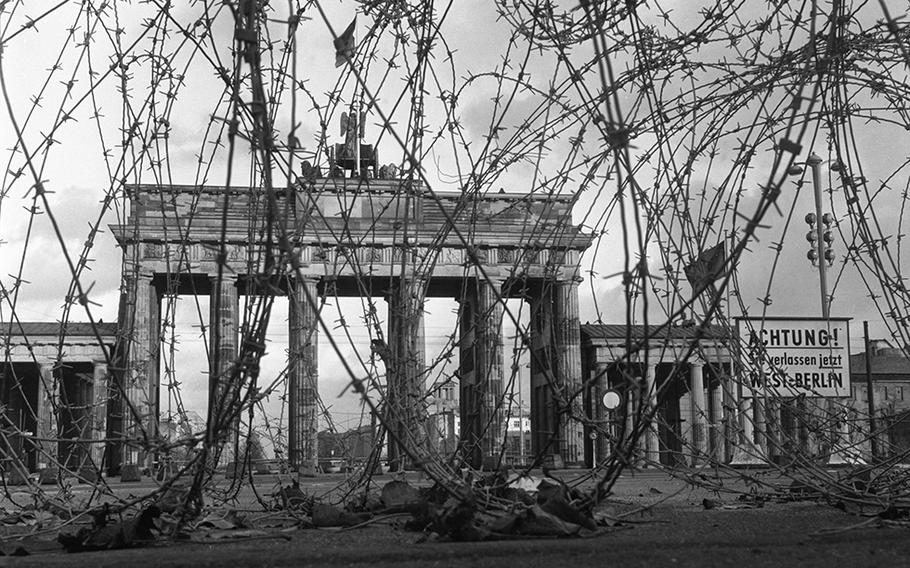 On the night of Nov. 9, 1989, thousands of Germans swarmed along both sides of the Berlin Wall — opened under massive public pressure by an East German leadership that realized its days were numbered. Within a year, the East German communists were gone. Germany was a reunited country again.

The ugly, gray wall that sliced through the heart of Adolf Hitler’s former capital had come to symbolize the division of Europe — one side communist, one side free.

The communists built the wall to keep their people from fleeing the Soviet bloc. By allowing the wall to open, the communists acknowledged that they could no longer stem the tide of freedom that would ultimately sweep away the Soviet Union, itself, by the end of 1991.

The fall of the wall paved the way for the end of the Cold War, the momentous confrontation between the United States, the Soviet Union, and their many allies and satellites. The constant fear of nuclear holocaust that had hung over the world for more than a half-century was gone.

The Cold War was only cold in the sense that there was no direct combat between the two superpowers. But conflicts involving proxies of the two military blocs — NATO and the Warsaw Pact — were waged across the world and claimed millions of lives.

In the years that have followed, much of the euphoria that surrounded the fall of the wall has dissipated.

Relations between the West and a revived Russia have soured since Moscow’s seizure of the Crimean peninsula from Ukraine this year. Leaders across Western Europe and the United States have warned darkly of a return to the Cold War.

Old nations re-emerged and new ones were born out of the dissolution of the Soviet Union. Those included the Baltic states — whose integration into the Soviet Union the U.S. never recognized — which now fear Russia’s intentions most.

The proliferation of new nations continued with the peaceful split of Czechoslovakia in 1993 into the Czech Republic and Slovakia. But brutal wars in ethnically diverse Yugoslavia — a communist country not under Soviet domination — led to the creation of seven new nations. Two of those nations have since joined NATO, further swelling its ranks from the 12 founding members to 28 today.

While Western European nations fret over Russia’s aggression and intentions, Poland has been urging its erstwhile adversaries to fortify NATO’s eastern flank. The Poles and other East Europeans who now populate Germany’s cities are no longer refugees from communism, but industrious tradesmen helping to drive Germany’s formidable economy.

A united Germany, once cleft in two by the Iron Curtain, has become Europe’s economic and political powerhouse.

It was the jubilant tearing down of the Berlin Wall that dramatically symbolized the collapse of communism, but the fabric of the Iron Curtain began to fray months before that — its inevitable demise secured when communist Hungary opened its border to allow thousands of East Germans who sought refuge there to travel to Austria and on to West Germany. West German diplomats were issuing passports at the border as families, crammed with their belongings in their tiny Trabant cars, waited to cross to freedom. Many sobbed over both their new liberty and the prospect they would never see their old homes again. Little did anyone know how soon the barrier between the two Germanys would disappear completely.

The collapse of communism also drastically changed the U.S. footprint and focus in Europe. During the Cold War, more than 300,000 personnel stared down adversaries in Eastern Europe. That number has now fallen to about 80,000, and many train side-by-side with troops from those very nations that were once on the opposing side. Whether the drawdown continues likely will depend on Russia.

But whether or not a new Cold War is in the offing, Europe has vastly changed since the Iron Curtain’s collapse. National boundaries have disappeared together with ideological differences. Thanks to common European Union membership, people once held at border crossings between East and West — sometimes for hours of searches and interrogation — now travel across those same borders the way motorists traverse state lines in the U.S.

Countries once held hostage behind the Iron Curtain have made clear they prefer the political and economic freedoms the EU offers and the defensive protection of NATO’s umbrella.