‘I wanted to die fighting’ 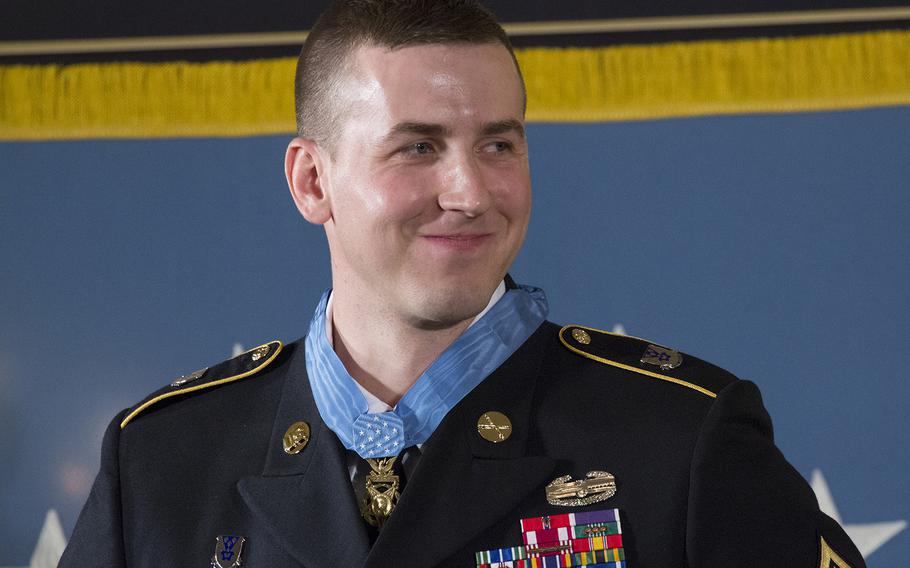 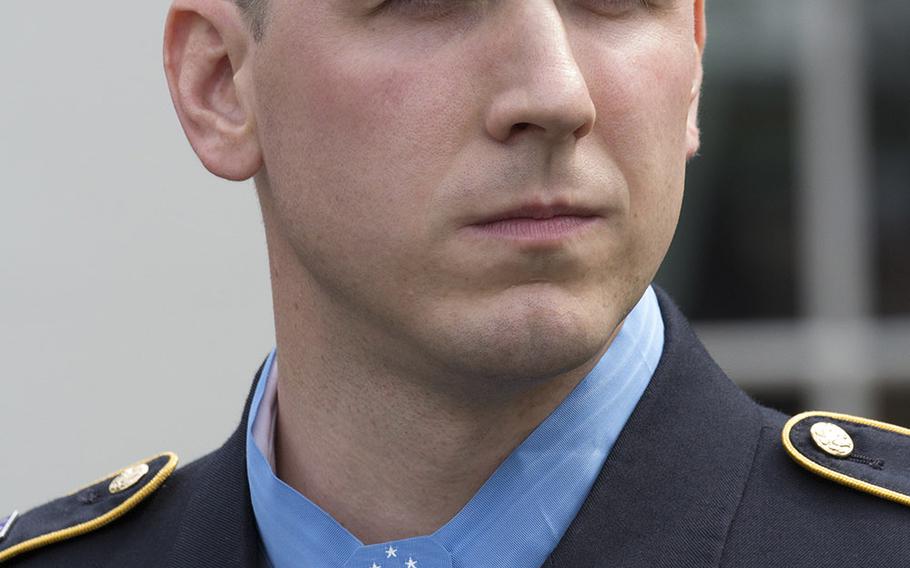 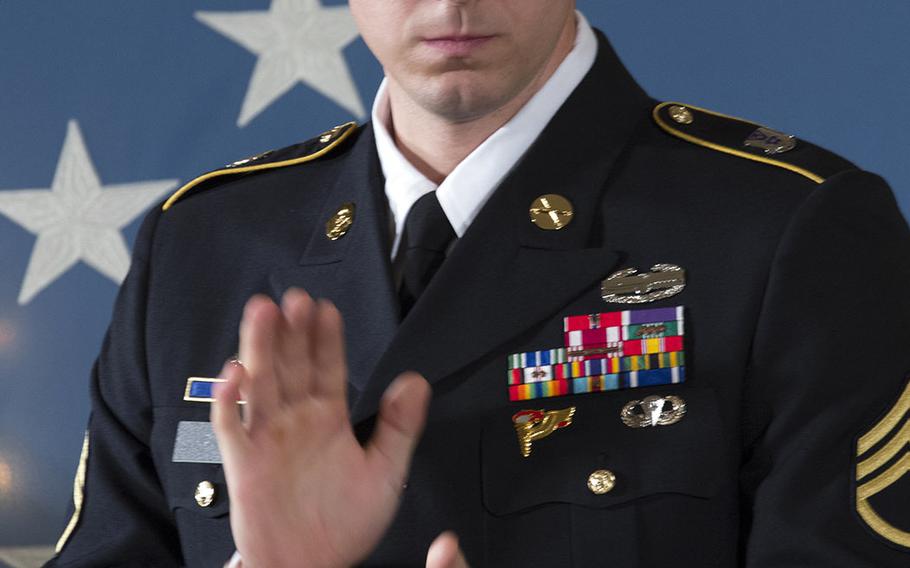 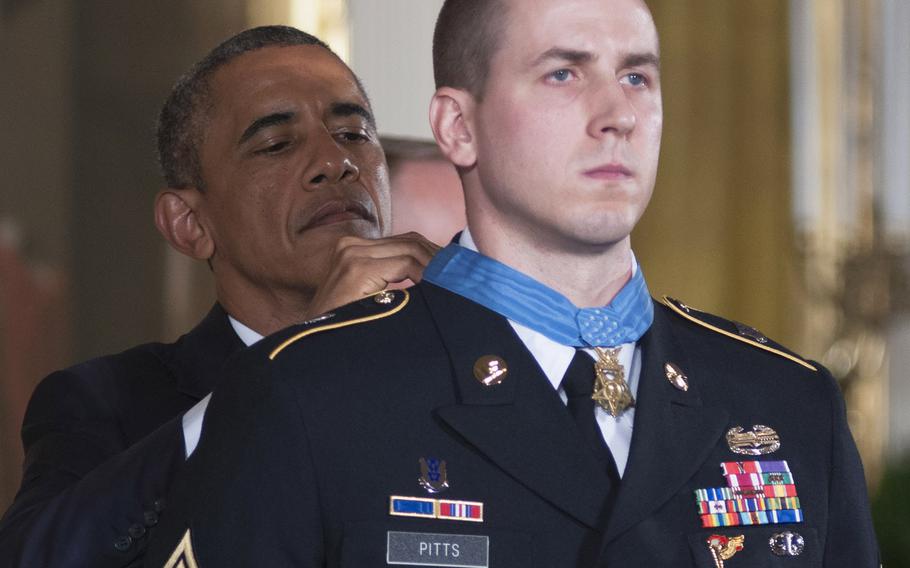 The 10 men are forever joined in history for their actions July 13, 2008, in the Battle of Wanat, one of the deadliest clashes for U.S. forces during the long war in Afghanistan.

Pitts says he will never forget his fallen comrades. He wants to make sure Americans always remember them.

“I feel an immense responsibility to honor their sacrifice and what they did,” said Pitts, 29, who lives in Nashua, N.H., with his wife and young son. The former staff sergeant, one of 27 soldiers wounded in the attack, medically retired from the military in 2009 due to his injuries.

“I feel it’s important for people not to focus on what I did. It’s what we did.”

What they did was repel a ferocious attack launched by 200 Taliban fighters as dawn’s first light spilled into the village of Wanat in eastern Afghanistan.

At the time, Pitts and eight other soldiers with Chosen Company of the 2nd Battalion, 503rd Infantry Regiment, 173rd Airborne Brigade Combat Team, were manning an observation post called Topside above a small U.S. patrol base.

The insurgents unleashed a torrent of machine-gun fire and rocket-propelled grenades at both positions. Two men at Topside were killed in the initial assault, and the other seven, including Pitts, were wounded.

Gouged by shrapnel in both legs and one arm, Pitts returned fire as more of his comrades fell. Noticing Pitts’ wounds, Cpl. Jason Bogar applied a tourniquet to one of his legs, then resumed firing at the enemy. Bogar, 24, was killed a short time later.

Pitts realized the insurgents had advanced to Topside’s perimeter when a thrown grenade killed a fellow soldier. Pitts began lobbing grenades at enemy positions, holding them after pulling the pin and allowing the timers to tick down so that insurgents would have no opportunity to hurl the grenades back.

As the attack continued, Pitts, running low on grenades and unable to stand because of his injuries, crawled to an M-240 machine gun and started firing over a wall of sandbags. At one point, he became aware that there was no other outgoing fire. He was the only soldier still alive at the observation post.

He made peace with his fate.

“I knew I was going to die,” he said. “I didn’t want to be captured. I wanted to die fighting, and that provided clarity. That helped me to keep focused on doing my part, and that was to take some of the enemy with me.”

Staying in radio contact with the patrol base, he called on soldiers there to fire mortars and artillery. He then picked up a grenade launcher and began firing grenades nearly straight into the air to deter insurgents who were just outside the walls.

Four soldiers from the patrol base arrived minutes later to aid Pitts. One of them, Sgt. Israel Garcia, 24, was killed when an RPG hit the post, taking his final breath in Pitts’ arms. As the other three soldiers fired at enemy positions, Pitts gathered ammunition for them, remained in radio contact with the patrol base and continued to toss grenades.

The insurgents were driven back with the help of more reinforcements and U.S. air support. Pitts and other wounded soldiers were evacuated by helicopter, and every day since July 13, 2008, he has thought about — and given thanks to — the men who died there.

“People have singled me out, but I’m no different from any of them,” said Pitts, who now works as a business development consultant for Oracle Corp. “They made the ultimate sacrifice. I’m only alive because of them.”

Yet it would be difficult to overstate Pitts’ resolve in the face of such extreme circumstances. At last year’s Medal of Honor ceremony, Obama, quoting one of Pitts’ teammates, said, “Had it not been for Ryan Pitts, that post almost certainly would have been overrun.”

Pitts’ insistence on emphasizing the nine men who died in the battle is rooted in empathy for their families.

“I came home and their loved ones didn’t,” he said. “I’m always willing to talk about what their fathers, brothers, sons did. I want people to be reminded.”

In the same spirit, he plays down the lingering effects of his injuries, recognizing that any pain he feels is its own kind of blessing.

“The only reason I get to have these moments — good and bad — is because of the sacrifice that those nine guys made,” he said. “I owe it to them to appreciate my life.”