‘I think it’s time for soldiers to help soldiers’ 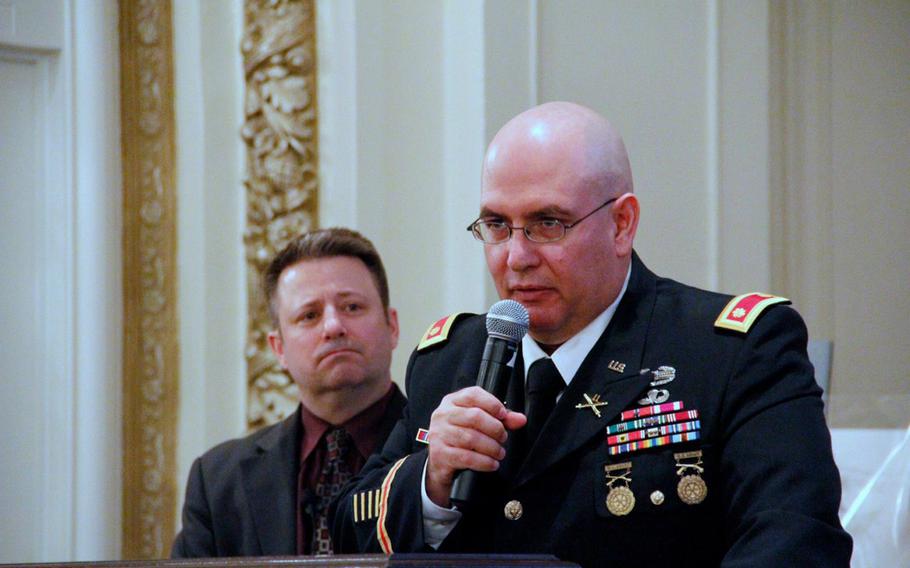 Jeff Hall conducting a speaking engagement at a Jasonâ€™s Box event in Davenport, Iowa in 2012. Jasonâ€™s Box is a non-profit organization whose mission is to improve the health and well-being of our military men and women. ()

Jeff Hall conducting a speaking engagement at a Jasonâ€™s Box event in Davenport, Iowa in 2012. Jasonâ€™s Box is a non-profit organization whose mission is to improve the health and well-being of our military men and women. () Jeff Hall on his second deployment to Iraq in 2005. Hall retired last year as a Major, after a 20-year Army career. () Jeff Hall searches a house in Iraq during his first deployment there in 2003. Hall retired last year as a Major, after a 20-year Army career. () 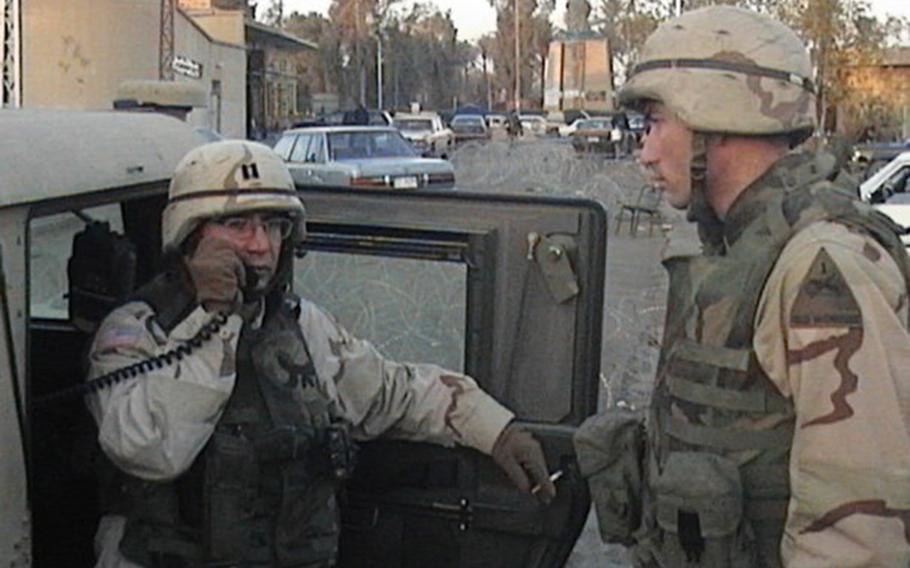 Jeff Hall on his second deployment to Iraq in 2005. Hall retired last year as a Major, after a 20-year Army career. ()

Jeff Hall was in his backyard, holding a 9mm pistol to his head trying to find the courage to pull the trigger. That was in 2008, after two deployments to Iraq that left him physically and mentally wounded.

He retired last year as a major, after a 20-year Army career in which he received two Bronze Stars and other awards. As a soldier on the battlefield, Hall has seen the horror of war. He conducted patrols and raids where he said he saw combat and death. He cracked his spine during a raid in Baghdad in 2003 — an injury that hurts him more than a decade later.

His transition from the battlefield was hard.

“All of life seems kind of lame and boring to me, since being in combat,” he said. Hall found himself in a long-term struggle to cope with the pain of physical injuries and with post-traumatic stress disorder. Up to 20 percent of veterans who served in Operation Iraqi Freedom have PTSD in a given year, according to the U.S. Department of Veterans Affairs. The VA estimates that 22 veterans die by suicide each day.

His experiences stateside left him increasingly frustrated about the attention and level of care offered to servicemembers.

“If one of my soldiers would have been shot crossing the street in Baghdad, we would have leveled that whole part of town to get him out of there,” said Hall, 44. That commitment to each other, he said, just isn’t there when soldiers come home.

“The real war has started with a lot of these guys. And I don’t think that the government is going to do everything they can for them,” he said. “I think it’s time for soldiers to help soldiers.”

Hall has become an advocate — a soldier on a new battlefield where saving hearts and minds at home is the primary mission.

As a health promotion officer before retiring from the Army, and as a volunteer with the Defense Department’s Real Warriors Campaign and other organizations, Hall estimates he’s counseled hundreds of soldiers to get help.

Hall’s efforts have been featured on NBC, in People and National Geographic magazines, and by several other media outlets. He’s also done speaking engagements, using the spotlight to raise awareness about the struggle many veterans face.

His wife, Sheri, is also involved with the Real Warriors Campaign, and often does speeches with Hall for spouses and families. “She is the better part of the story,” he said. The couple have been marriedfor 24 years and have two daughters. Her advice to spouses having trouble coping with a returning warrior, from a military blog: “Don’t just let things be.”

“She talks about what it was like to see the raw hate-filled effects of post-deployment, and how she dealt with it. Protecting our family from the pain of my wanting to die and the long road to recovery,” Hall said.

He also promotes alternative treatment methods, such as acupuncture and art therapy -- “the really hokey and kind of hippie stuff that I would never have prescribed to in my life, that I’m a full believer in,” he said. “Art is one of them.”

Hall said he draws with pencils or does some wood carving whenever he’s feeling down . “It has helped me very much with fighting depression and fits of outright rage.” By being able to “write” his pain in pictures, Hall credits art therapy for bringing him back from “practically being comatose.”

“It took a mind … that was scattered across 300 or 800 television sets on all different channels and focused it on one simple thing. And it saved me.”

While art therapy has eased the pain in his mind, acupuncture has helped with his physical pain, using strategically placed needles to leverage links between points on the body.

Hall was a fan from the first time he tried it. “I felt like I was floating off of the table. And I have so much pain I can barely walk. It was marvelous.”

The pain relief is temporary, but Hall prefers this method to medication — a preference that he advocates to others.

“I’m trying to teach solders that maybe taking all that medicine is not the best thing to do,” he said.

Since retiring from the Army he moved to Oklahoma, where he continues to speak, including appearances at Emporia State University

He also has a new goal — engaging the Oklahoma state legislature to build a wellness center for veterans in northwest Oklahoma, where Hall said there is no veterans’ center or representation.

“It’s unacceptable to me,” he said.

His efforts are linked to maintaining his own recovery.

“If I don’t try, then I think that I’ll go right back into that guy that was sitting in my backyard… with a pistol in my hand.”