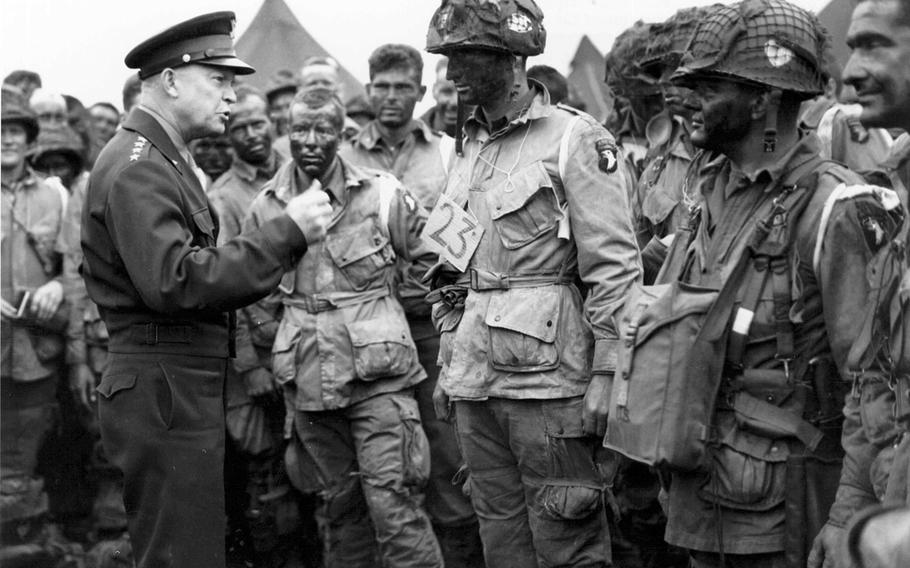 Gen. Dwight D. Eisenhower gives the order of the day, “Full victory — nothing else,” to paratroopers in England just before they board their airplanes to participate in D-Day. (U.S. Army)

From ancient times, amphibious military invasions are rightly regarded as especially challenging. Early summer includes the 72nd anniversary of the greatest such operation, the Allies’ invasion of France in World War II, on June 6, 1944 — D-Day.

The Normandy invasion combined thorough planning, mobilizing vast materiel, and great imagination. When the operation already underway was publicly announced, a U.S. newspaper highlighted a front-page drawing of invading soldiers cascading into Europe, as a terrified Hitler fled. A year of extremely brutal, almost continuous combat lay ahead, but the end of Nazi Germany was in sight once the beaches were secured.

The leadership of Supreme Allied Commander Gen. Dwight D. Eisenhower was crucial. Ike demonstrated great executive ability in supervising an unprecedented logistical challenge, and his remarkable interpersonal skills welded and held together the most diverse military alliance in history. Related to this, he was able to establish overall unity of command. This was never achieved even among the American military in the Pacific, where Gen. Douglas MacArthur pursued one strategic vision, while Navy admirals implemented a different approach.

Extensive bombing of transport routes and supply depots in France was viewed by Eisenhower as crucial preparation for the land invasion. Such action would bring an estimated minimum of 60,000 civilian casualties, and perhaps far more. For that reason, many American and British air commanders resisted such widespread destruction, arguing for a much more limited effort.

Eisenhower was adamant about the absolute need for extensive bombing, arguing that less would put the invasion at severe risk. He was able to turn to the leader of the Free French, Gen. Charles de Gaulle, whose nation was the target. De Gaulle agreed completely, and gave unequivocal support. Uniquely among senior Allied commanders, Ike had managed to establish an effective working relationship with the demanding, difficult French leader.

Simultaneously, the American leader never lost awareness of the terrible human costs of war, borne primarily by the enlisted ranks. He constantly stressed the fundamentally important role of the combat soldier, and regularly went to see troops in the field. This dimension is captured especially by classic photographs of his visit with young American paratroopers preparing to depart to initiate D-Day.

Eisenhower responded by isolating Patton in England, to reflect on his behavior while a fictitious army was created around him. Actors were assigned roles, bogus information generated, phony buildings and vehicles constructed. The trick worked. On D-Day and immediately thereafter, crucial German units were held back, in part because Patton’s (fictitious) forces had not yet moved.

Carthage College teachers over many years have made good use of the ancient classic “The Art of War” by ancient China’s philosopher Sun Tzu, who stressed the importance of deception. Ike may or may not have read the book. He could have written the book, easily.

When Eisenhower died, newly inaugurated President Richard M. Nixon’s insightful eulogy rightly compared him to George Washington: “first in war, first in peace and first in the hearts of his countrymen.”

On this anniversary, Ike provides enduring lessons for all of us.