The West has failed — North Korea is a nuclear state 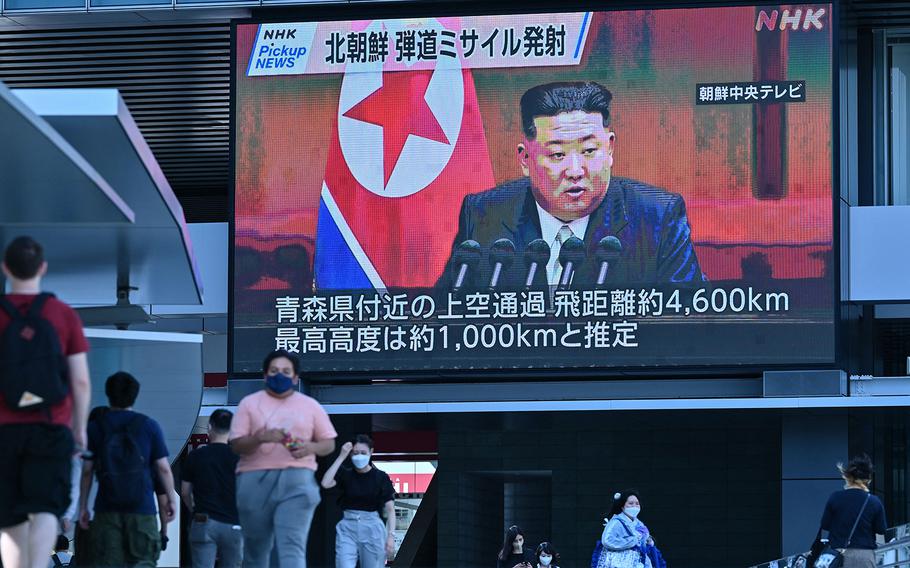 Pedestrians walk under a large video screen showing images of North Korea’s leader Kim Jong Un during a news update in Tokyo on Oct. 4, 2022, after North Korea launched a missile early in the day that prompted an evacuation alert when it flew over northeastern Japan. (Richard A. Brooks, AFP via Getty Images/TNS)

“There will never be such a thing as our abandonment of the nuclear weapons or denuclearization,” Kim declared last month. “The position of our state as a nuclear nation has become irreversible.”

Decades of pursuing the “denuclearization” of the Korean Peninsula have failed. After North Korea last month declared itself a nuclear weapons state, it’s time for the U.S. and its allies to accept this reality — and learn to live with it. That’s the first step to reducing the risk of accidental confrontation that could lead to all-out nuclear war.

The idea is reaching the mainstream. Jeffrey Lewis, a leading nuclear weapons expert, has called on Washington to “contemplate the unthinkable” and accept North Korea’s nuclear statehood, citing the increasing risks of a flashpoint as South Korea and Japan talk up first-strike capability.

Washington should think “about the return we’re seeing on our stubborn continued insistence on denuclearization as the desired near-term end-state,” agrees Ankit Panda, a senior fellow in the nuclear policy program at the Carnegie Endowment for International Peace. “We have a far more acute interest on the Korean Peninsula, which is averting the use of nuclear weapons by North Korea.”

A rethink is needed. For one thing, the U.S. administration already has shown an admirable willingness to abandon the failed policies of previous administrations. From ending the war in Afghanistan, casting off decades of naive Democratic Party policy on China or deescalating the War on Drugs with a reform of cannabis policy, President Joe Biden has discarded ideas he previously promoted.

And to describe the goal of denuclearization of the Korean Peninsula as a bust would be generous. Beyond condemning millions to poverty after 30 years, the U.S. has little to show for its punishing economic sanctions. Pyongyang has built itself a formidable arsenal: enough fissile material for dozens of nuclear bombs, and a demonstrated capacity for its missiles to hit U.S. bases on Guam or the American mainland itself. More nuclear tests are feared soon, which would be the first in five years. Kim said last month he won’t budge even after 100 years of sanctions.

Absent a very dangerous policy of regime change, Kim is going to remain in charge, and in any event doesn’t have a way to climb down from nuclear weapons. The window for military action against North Korea closed during the Clinton administration, when the U.S. considered a preemptive strike. It chose negotiation instead, which Pyongyang used as cover to speed development of its nuclear and missile programs.

North Korea’s new nuclear doctrine, unveiled in September, has further upped the ante, pledging automatic nuclear strikes on its enemies if its command-and-control leadership is threatened. Such a doctrine is a “logical reaction” to South Korea talking up its ability to deal a fatal blow to the North’s leadership, Panda says.

Indeed, far from the stereotype of the crazy North Korean leader, Kim is being perfectly logical in seeking to keep his regime in one piece. Russia’s invasion of Ukraine has put that in stark relief. Ukraine famously agreed to give up the nuclear weapons on its territory (though they were not under its control) after the fall of the Soviet Union, in exchange for security guarantees from the U.S., U.K. and Russia. Time has shown how valuable those assurances were. Iraq’s Saddam Hussein and Libya’s Moammar Gadhafi are other examples of leaders who abandoned their nuclear pursuits, only to meet gruesome ends.

Kim could not be sure of any guarantee that Washington might give in return for denuclearization — especially when it’s U.S. policy that has been most inconsistent. Flipping between dovish Democratic and hawkish Republican positions on Pyongyang (or in the case of Donald Trump’s administration, between “fire and fury” and love letters in the space of a few years) has resulted in head-snappingly inconsistent carrot-and-stick approaches.

Meanwhile, through a cycle of bait-and-switch negotiations and threats, Kim has managed to keep the U.S. and South Korea distracted enough to complete his nuclear state. He’s on his fourth South Korean leader and third American president. He’s less than half Biden’s age; time is on his side, assuming he can avoid the heart problems that felled his father and grandfather.

Of course, there are significant risks. Pyongyang has proven not to be a trustworthy negotiating partner. Being seen to reward its obstinacy might embolden rogue regimes elsewhere. Even a tacit acceptance of North Korea’s position could also lead to another bout of proliferation. The South Korean public is already roundly in favor of also possessing nuclear weapons. Japan is understandably far more opposed but how might it react surrounded by four nuclear-armed states?

But doggedly pursuing a failed policy that has only become more unrealistic over the years isn’t getting the U.S. and its allies anywhere — and the risk of accidental confrontation is only running higher.

Gearoid Reidy is a Bloomberg Opinion columnist covering Japan and the Koreas. He previously led the breaking news team in North Asia, and was the Tokyo deputy bureau chief.