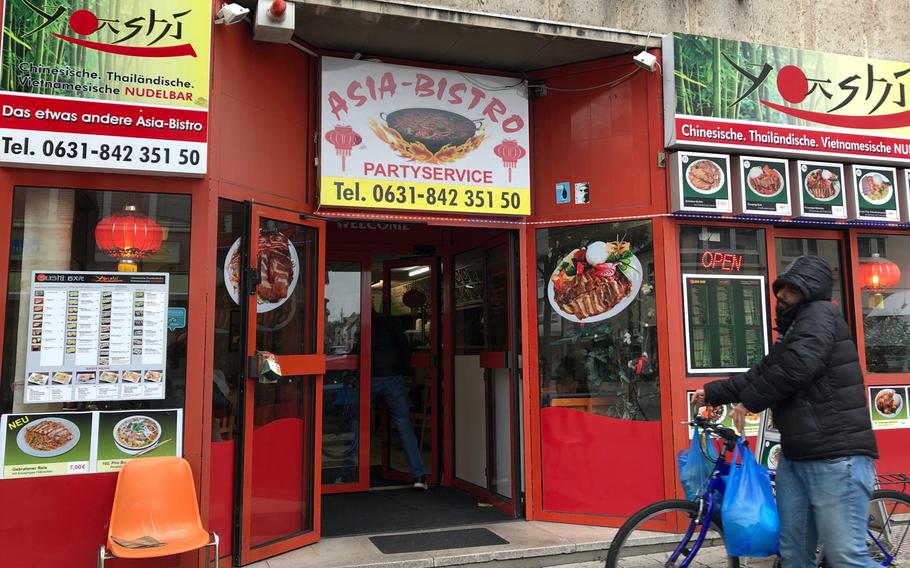 Yoshi Nudelbar on Eisenbahnstrasse in Kaiserslautern, Germany, is a good place to go if you want to fill a hole in your stomach without creating one in your wallet. The portions are large, the prices are cheap, and the service is speedy. (Karin Zeitvogel/Stars and Stripes)

Yoshi Nudelbar on Eisenbahnstrasse in Kaiserslautern, Germany, is a good place to go if you want to fill a hole in your stomach without creating one in your wallet. The portions are large, the prices are cheap, and the service is speedy. (Karin Zeitvogel/Stars and Stripes) 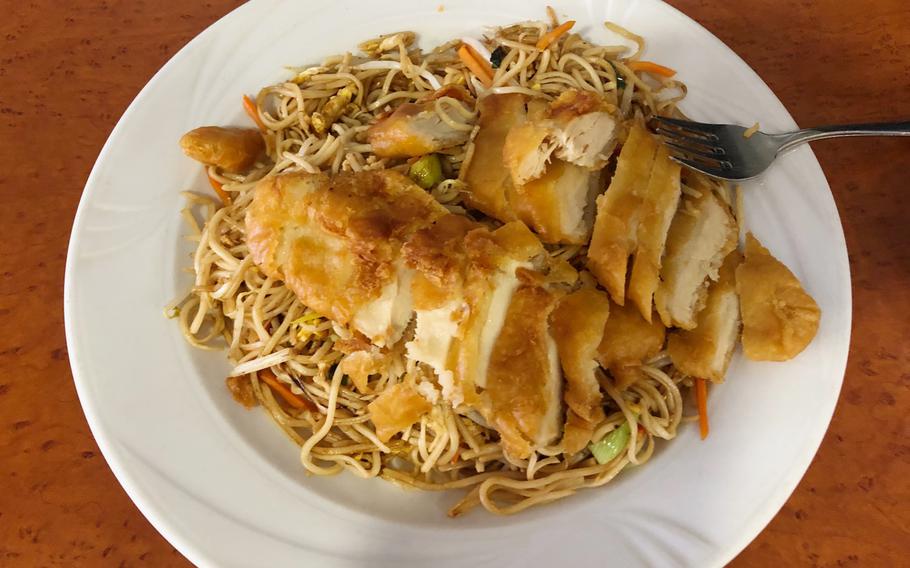 Number 31 on the menu at Yoshi Nudelbar in Kaiserslautern, Germany, fried noodles with crispy chicken and egg. The chicken was tender and just the right amount of crispy, but the meal would have been enhanced with a better selection of sauces. (Karin Zeitvogel/Stars and Stripes) 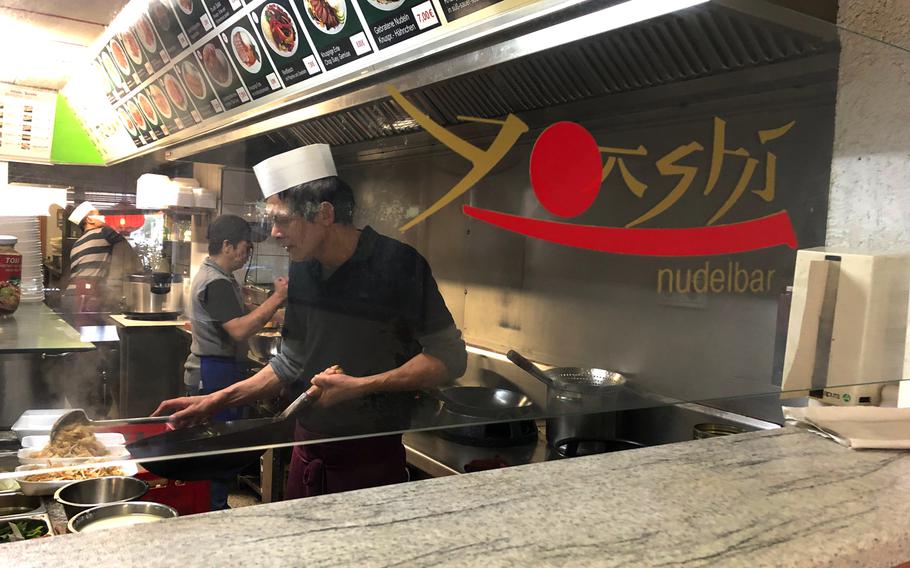 The cooks at Yoshi Nudelbar in Kaiserslautern, Germany, prepare copious meals quickly. Ours was ready before we'd found where they keep the forks and knives. (Karin Zeitvogel/Stars and Stripes) 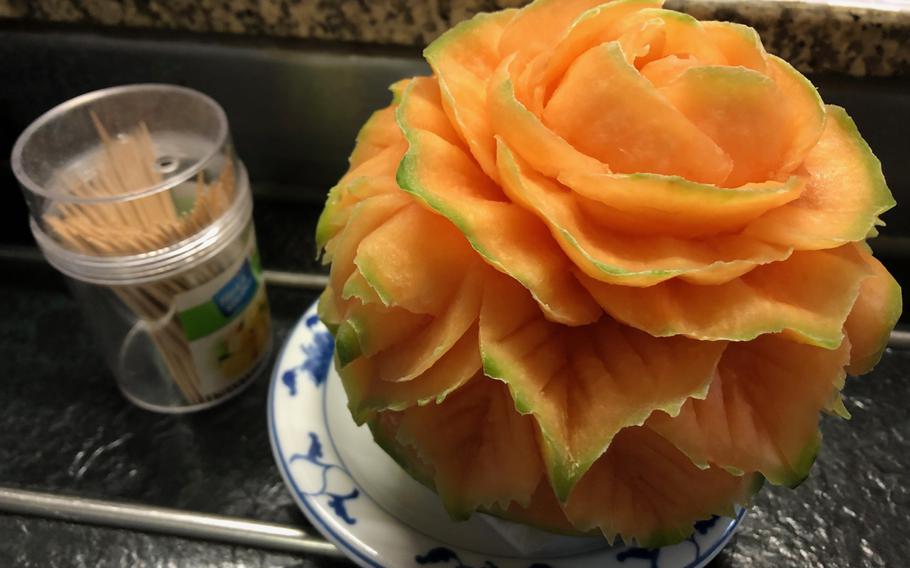 A flower carved out of a cantaloupe sits on the edge of the counter in Yoshi Nudelbar in Kaiserslautern, Germany, on Oct. 9, 2019. The melon-art was not intended for consumption. (Karin Zeitvogel/Stars and Stripes) 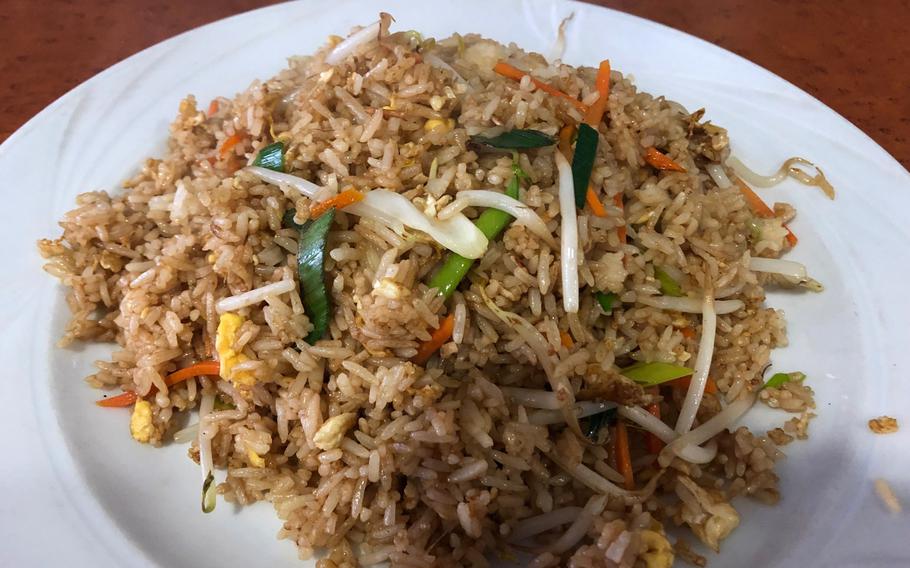 Number 26 on the menu at Yoshi Nudelbar in Kaiserslautern, Germany, fried rice with veggies and egg, came in a large portion but lacked the je ne sais quoi of great Asian food. (Karin Zeitvogel/Stars and Stripes)

There are times when all you want is a place to eat where your food will come quickly and fill a hole in your stomach without making one in your wallet. All the better if you don’t have to walk several miles to get there because there’s nowhere to park right outside.

Other than the parking, Yoshi Nudelbar on Kaiserslautern’s busy Eisenbahnstrasse easily fits the bill, and on the rainy Wednesday that I went there for lunch with a friend, we lucked out and got a parking space right across the street.

This is an unassuming place with Formica-topped tables decorated with two bottles of hot sauce, and salt and pepper shakers. The cooks work behind a long counter, chopping fresh veggies, breading and frying chicken and other meats, and stir-frying at a frenetic pace in large woks. They call themselves an Asia Bistro and a Chinese, Thai and Vietnamese noodle bar, but they also do sushi, so add Japanese to that list.

This is one of those places where you order by number, so I got a 26, which was fried rice with egg and veggies. My lunchmate ordered a 31 — fried noodles with breaded and fried crispy chicken and egg.

We also ordered a No. 23 — tofu with vegetables and curry sauce, served with boiled rice — to take back to the office for a friend.

Our food was ready in less time than it took us to find where they kept the forks and knives. The first thing we noticed was the portion size. There was enough rice and vegetables on my plate to feed an Army regiment. I ended up eating about half of it before asking for a box so I could take the rest home.

The next thing we noticed was that, while tasty, the food was a little bland. We reckoned that’s probably because Yoshi’s caters to perceived Western tastes — there was a steady stream of Germans and Americans coming and going when we were there. To make up for the blandness, we slathered our meals with one of the hot sauces on the table, wishing that there were more sauces to choose from. Don’t be put off by the description on the bottles. I get violent hiccups when something is too spicy, and that didn’t happen.

My friend said his chicken was tender and tasty, with just the right crispiness. The noodles it was served with were “good” — his bland description, which was probably spot-on for the bland noodles. My fried rice was, well, OK. It really needed that little extra something that authentic Asian food usually has, which comes from added herbs or spices that we don’t usually use in the West. For 4.50 euros for that much food, though, I wasn’t going to complain.

Yoshi, which also has a branch in Zweibruecken, offers two desserts — baked bananas with honey and baked pineapple with honey — and a selection of fruit juices, fizzy soft drinks, beer and wine starting at 2 euros for non-alcoholic beverages. Sake and plum wine are also available.

We were in and out within 20 minutes, complete with the No. 23, which, all the way back to the office, was teasing me with a smell that was much more aromatic than my fried rice. Next time I go — and there will be a next time for that price and that portion size — I’m getting that.

Address: Eisenbahnstrasse 27, 67655 KaiserslauternDirections: About 10 minutes walking from main train station. Street parking available, but you need to buy a ticket.Hours: Open 11 a.m. to 10 p.m, 7 days a week.Information: Cash only.