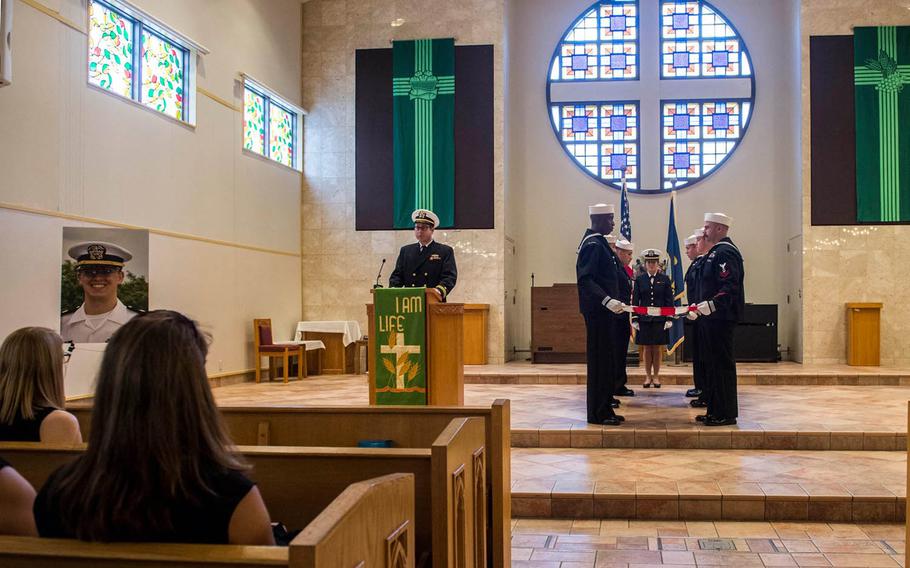 Sailors fold a flag during a memorial service for Lt. Stephen Hopkins inside the Chapel of Hope at Yokosuka Naval Base, Japan, Tuesday, Aug. 22, 2017. Hopkins, assigned to USS Stethem, was reported missing and assumed overboard on Aug. 1, 2017. (Patrick Morrissey/U.S. Navy photo)

The Navy has held a memorial service for the USS Stethem sailor reported overboard from the guided-missile destroyer earlier this month in the South China Sea.

The ceremony for Lt. Stephen Hopkins took place Tuesday at the Chapel of Hope at Yokosuka Naval Base, Japan, according to a photo posted Wednesday on the 7th Fleet’s official Facebook page.

The Stethem, which is homeported at Yokosuka, was transiting about 140 miles west of the Subic Bay, Philippines, when Hopkins disappeared on Aug. 1.

Approximately 10,000 square nautical miles of ocean was searched in 79 hours, the Navy said. The effort was called off when Hopkins was not found after more than three days.

Hopkins, a Texas native, joined the Navy in 2009 and reported to the Stethem in July, officials said after the incident.