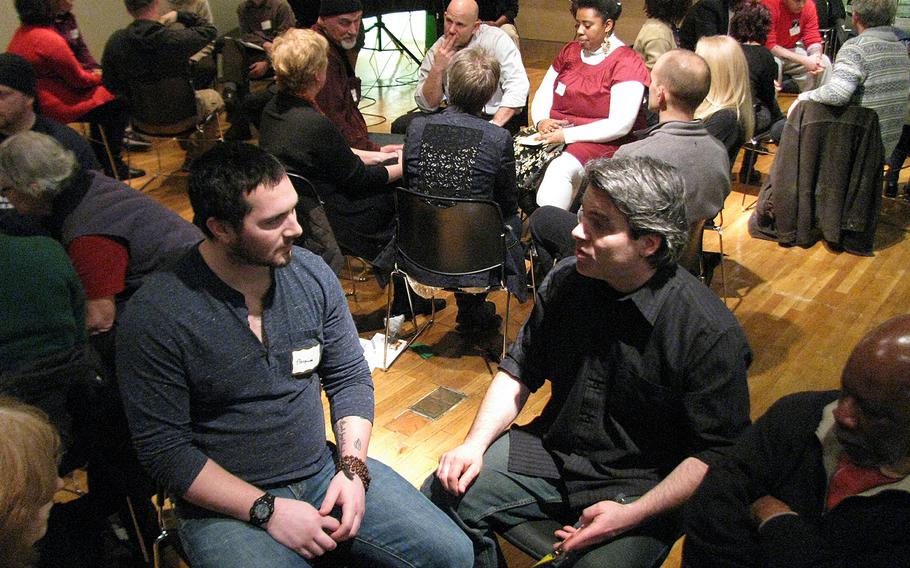 Stars and Stripes looks at how veterans are bridging the gap between their old military lives and their new civilian reality. Read previous stories at stripes.com/go/greatdivide

NEW YORK — Spc. Patrick Murphy had barely seen any civilians for months, but now he was getting peppered with questions from them.

So you were in Afghanistan?

Have you thought about school when you get out?

Is there something like a Pentagon support group for veterans?

Are the treatments for your PTSD working?

Murphy laughed. “I think so, but this is my second time through the program, so....”

At the Veteran Civilian Dialogues get-together in midtown this Monday evening, the crowd included a handful of senior citizens, some local housewives, a collection of first responders from Sept. 11 and veterans ranging in age from 22 to 70. One sported a smile and a hat reading “Dysfunctional Veteran: Leave me alone.” Another wore a USMC T-shirt and a scowl.

Murphy glanced nervously around the group, waiting for the next question. When another veteran spoke about losing friends in Iraq, the civilian women called him a hero. Murphy looked at him and simply said, “I’m sorry.”

He laughed when another vet cracked a joke about Roman soldiers getting their own concubines upon returning from the battlefield. The civilian women didn’t. They laughed when the veteran complained about 19-year-old classmates losing their cell phone privileges. Murphy doesn’t.

The 26-year-old war veteran had almost nothing in common with the 60-year-old social worker sitting beside him. She came to the event because she heard about a veteran with post-traumatic stress killing two former soldiers. Murphy smiled weakly as she talked about the horrors of PTSD.

But a little later, he grinned widely. “This is more than I expected,” he said. “We were really talking about new things.”

When the Veteran Civilian Dialogues were launched three years ago, organizers from the Intersections International in New York saw a flurry of interest from community members and the media looking for ways to “fix” broken servicemembers returning from war.

Much of the initial attention has subsided, but the group still pulls groups of 50 locals for a dialogue every few weeks. Leaders of the effort hope to expand the program to other cities as soon as this summer.

“We’re careful not to pathologize veterans, because we heard that complaint a lot in the beginning,” said Robert Chase, executive director of the group. “If anything, we find the civilians who are attending are looking for healing that they need.

“Maybe it’s their apathy toward the war, maybe it’s the lack of responsibility they feel. Maybe it’s just their inability to talk to veterans about what they did.”

Chase, an anti-war protestor in the 1970s, said he has seen a steady social shift from the “blame the troops” response of the Vietnam War to the near-universal public support for servicemembers from Iraq and Afghanistan.

But with that change has also come ignorance. Most Americans had a neighbor or family member who served in Vietnam, but only a small slice of the population has served overseas in the recent wars or knows someone who has.

“A few years ago, when I heard one servicemember read a poem that had the line, ‘I killed for you,” I was shocked,” he said. “I hadn’t thought of it that way. I didn’t have any ownership of what he had done on behalf of me, on behalf of the country.”

The group’s headquarters sits in the heart of New York City, beside a church adorned with yellow ribbons pinned with prayers for deployed troops and across the street from a souvenir shop with a neon red, white and blue eagle in the window.

Murphy admitted that he was wary of the event, because he wasn’t sure what the group would expect him to talk about.

So when his turn to speak came, he recounted his time in Afghanistan as a medic. He talked about his struggles with PTSD. He said he didn’t really feel like most civilians he met understood what he had been through.

But he spoke much longer about his new life goal: to become a professional photographer. The civilians seized on that, asking what equipment he has, offering portfolio tips, discussing school options, troubleshooting the path toward a second career.

“It was great to get that kind of feedback, not just because the encouragement,” he said. “I wasn’t just a veteran to them. I could be something else, like a photojournalist.”

Across the room, Army vet Phoebe Gavin admitted to her group that she doesn’t have many non-military friends, because she doesn’t really trust civilians.

“Especially the ones who want to be involved with veterans, or help veterans,” she said. “I feel like they’re patronizing us. I don’t know what they really want.”

After two hours of speaking with strangers, her mood changed. Most of the conversation was casual and inquisitive, not as judgmental as she had feared. The questions about her time in Iraq weren’t leading to an anti-war protest.

“This forced me to challenge some of what I had thought about non-veterans,” she said.

Susan Harvey — the social worker talking to Murphy about the horrors of PTSD — understood where the troubled veterans at the event were coming from. She works as a case manager for elderly abuse victims and has heard plenty of rough stories over the years.

So, at the start of the evening, she told the group that she felt an obligation to come, to help or at least offer a friendly voice.

“I just really felt like I should be here, for the veterans,” Harvey said.

But as the younger vets spoke, she was taken aback. She asked why one former soldier felt unappreciated when so many people “support the troops.” She didn’t laugh as the vets talked about starting their own city, outside civilian society.

“Do you really feel like you want to be outside, to be segregated from the rest of us?” she asked.

Harvey told Murphy that she finds it difficult for veterans and civilians to relate, but the two spent much of the next hour talking about his photography. She helped another veteran sketch plans for a cross-country road trip.

She listened intently as a Vietnam veteran and Iraq vet compared the nightmares they still face nightly. The stories of losing friends in combat were more vivid than what she’s used to.

“We can’t always identify with you,” she said to the veterans in the group. “But I feel like we want try and to know more.”

Meeting in the middle

Fred Johnson, one of the coordinators for the dialogues event, said no two of the events run exactly the same. Some of the nights end up with more tears than laughs, some end with new lifelong friendships, some simply offer a pleasant distraction from daily life.

He’s fine with that. The 69-year-old served in Vietnam, “so I’m old enough to remember when this kind of dialogue was impossible.”

After this night ended, he was still trying to drum up conversations among the guests, to keep the new camaraderie alive. His bracelet, stamped with “we’re better together” on the side, bounced as he shook hands with every new person.

At least half of the participants at this night’s event were return guests, and many were promising to be at the next one. Murphy wasn’t sure if he would be back, since he might be returning upstate in a few days.

But, he was OK with that.

“It was great just have a real conversation with these people,” he said. “I’m feeling pretty good right now.”