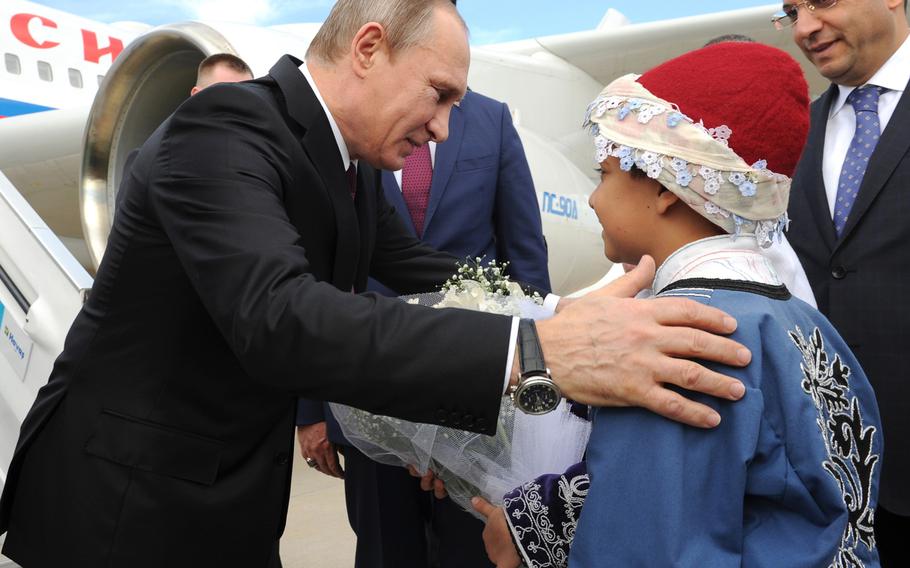 ANTALYA, Turkey -- World leaders gathering for a major summit in the shadow of a horrifying terror spree in Paris are looking to answer a critical question: Beyond tough talk, how will the world respond to bloodshed now extending far beyond the Islamic State group's foothold in the Middle East?

The specter of the Islamic State threat and Syria's civil war hanged over the Turkish seaside city of Antalya on Sunday as leaders descended for the Group of 20 summit of leading rich and developing nations. Although the overlapping crises were already on the lineup for the two days of talks, they were thrust to the forefront by elaborately coordinated attacks that killed 129 in the French capital just two days earlier, in the deadliest attack in the West blamed on the extremist group.

Jolted to attention by carnage, leaders in Europe, the United States and beyond have pledged to step up the response, with French President Francois Hollande vowing a "merciless" war on the Islamic State. Yet there were few signs of an emerging consensus about exactly what that means.

The United States, along with coalition partners, has been bombing IS in Iraq and Syria for more than a year with limited success. President Barack Obama has been reluctant to get pulled deeper into the conflict and has ruled out a major U.S. ground offensive, although he recently authorized sending a few dozen special operations forces into Syria.

Other nations the U.S. views warily, like Iran and Syria, have also bombed IS, in a dizzying range of militaries piloting the skies above the Islamic State's self-proclaimed caliphate. Cautious U.S. optimism about Russia's involvement quickly soured when the U.S. determined Russian President Vladimir Putin was more focused on targeting rebel groups fighting Syrian President Bashar Assad's government than defeating IS.

Putin and Obama, who are now lined up on opposing sides of Syria's bloody civil war, planned no formal sit-downs while both were in Antalya - just a few hundred miles from Turkey's border with Syria. Yet they were expected to cross paths on the sidelines of the summit.

"We hope that the events in Paris would properly arrange things and change the scale of priorities of our colleagues in Washington and other NATO capitals," Russian Deputy Foreign Minister Sergei Ryabkov told reporters in Antalya, where a mammoth security presence blanketed a wide area around the summit site.

For his part, Obama planned to discuss the IS threat with Turkish President Recep Tayyip Erdogan on Sunday, the start of Obama's 9-day trip to Turkey, the Philippines and Malaysia. The summit's host, Erdogan is fresh off his party's impressive victory in Turkey's recent elections, but his relations with Obama have been strained over tactical disagreements about how to push Assad out of power in Syria.

Obama also scheduled a meeting Sunday with King Salman of Saudi Arabia, a majority Sunni nation that opposes Assad and is deeply skeptical of Iran's involvement in any solution to the conflict.

One option that emerged in the wake of Friday's attacks was the possibility of France asking for help from its NATO allies. Only one in its 66-year-history - after 9/11 - has NATO's communal defense obligation been invoked.

Shrouding deliberations about how to escalate the fight against IS were diplomatic maneuverings over a new plan to wind down Syria's long-raging civil war, denying IS and other radical Islamic groups their base of operations. The proposal, discussed over the weekend by foreign ministers in Vienna, appears based largely on a Russian initiative, and envisions negotiations between Assad's government and opposition groups starting by Jan. 1.

But gaping, open questions about the proposal, such as which opposition groups would be allowed to participate and what role Assad would play, softened hopes for a lasting breakthrough. The U.S. insists Assad has no place in Syria's future government while Russia - Assad's key patron - has left open the possibility he could still play a role.

"We do agree on this: It is time for the bleeding in Syria to stop," U.S. Secretary of State John Kerry said as the talks closed Saturday. "It is time to deprive the terrorists of any single kilometer in which to hide."

Although the IS threat promised to dominate this year's G-20 summit, the agenda also included efforts to hasten economic growth among the world's largest economies, with a particular focus on addressing the effect that China's economic slowdown is having on other nations.

Leaders also planned to discuss the migrant crisis that has distressed Europe as hundreds of thousands flee Syria and elsewhere in the Middle East.