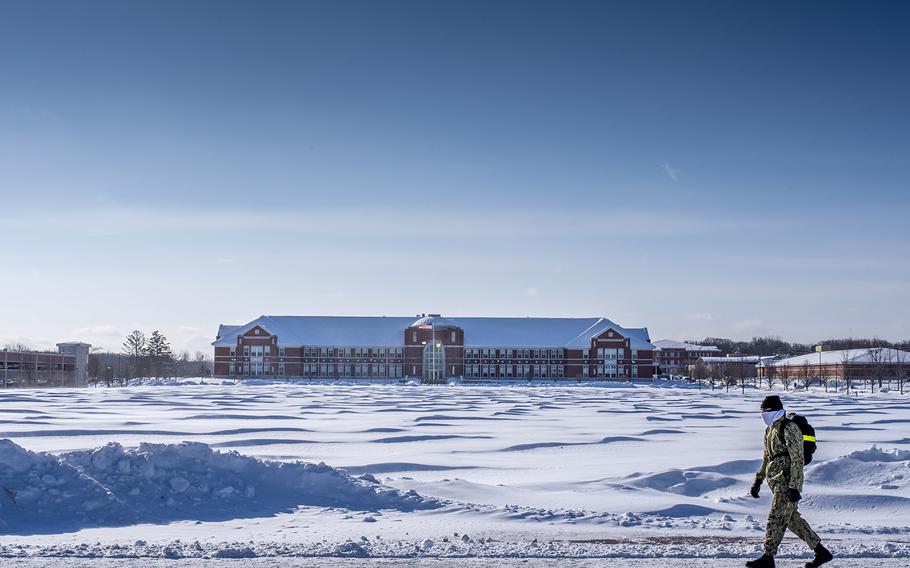 A Navy recruit walks between training locations at Naval Station Great Lakes, Ill. Temperatures at the Navy's boot camp have dropped to as low as -52 degrees. (Spencer Fling/U.S. Navy )

Extreme cold weather and wind chills as low as -52 degrees in the Midwest caused two days of closures this week at Naval Station Great Lakes, located north of Chicago on Lake Michigan.

A combination of cold and wind Wednesday led base officials to close the base to mission essential personnel only. O’Hare International Airport recorded a low temperature Wednesday of -23 degrees with the wind chill at -52 degrees. In that extreme cold, being outside with exposed skin even for just a few minutes can cause frostbite or hypothermia, said Ben Deubelbeiss, meteorologist with the National Weather Service in Chicago.

The Navy base also closed Monday as the National Weather Service recorded more than 6 inches of snow in the area.

“With the temperatures being so low, we had to make sure the sailors stayed in and stayed warm,” said Matt Mogle, a civilian spokesman for the Training Support Center Great Lakes, a tenant command at Great Lakes with about 5,000 sailors assigned to it for apprentice-level surface warfare training.

On Thursday, the Navy delayed reporting to the base to allow everyone to arrive safely as the extreme cold weather continued. The forecasted high temperature was -1 degree.

Meanwhile, staff at the base’s Recruit Training Command, the Navy’s only boot camp, were permitted to report to work later Monday, with officials posting a video to social media of recruits doing situps to “stay warm.”

But on Wednesday, boot camp halted to keep recruits inside and warm, said Lt. Joe Pfaff, spokesman for the command. If needed, the command will adjust training to Saturday to make up for lost time.

“Obviously the drastic temperatures are an anomaly — it’s not something that happens every year,” Pfaff said. “But cold weather, snow and ice are par for the course for us. … This is something we always plan and prepare for.”

The command averages about 6,000 recruits at any given time for the Navy’s eight-week boot camp. An indoor graduation ceremony for new recruits will go on as scheduled Friday morning, according to information posted by the command on social media. Family members of recruits with canceled flights are encouraged to email the command so that their family member can be informed of their absence.

Another round of light snowfall is expected for the area Thursday night, but overnight temperatures are expected to rise, Deubelbeiss said.

“We are sort of gradually climbing out of this bitter cold mass,” he said. “At daybreak tomorrow, the area will be above zero. It will remain in the single digits, but we’re climbing our way to a high in the low 20s [Friday] afternoon.”

Looking to the weekend, temperatures will eventually get into the 40s.

While the extreme cold is “very unusual,” Deubelbeiss said it wasn’t record-breaking for Chicago. In Rockford, just west of Chicago, the weather service recorded an all-time low Thursday morning. Chicago missed its record by four degrees Wednesday and six degrees Thursday, he said.

“Our records go back about 150 years. That shows how unusual this is,” Deubelbeiss said.

As personnel at Naval Station Great Lakes prepared to hunker down for the cold, shelves at the Navy Exchange emptied of food.

A Wednesday deliver was canceled, but a large delivery is expected Friday, he said. Shelves will be restocked as quickly as possible.