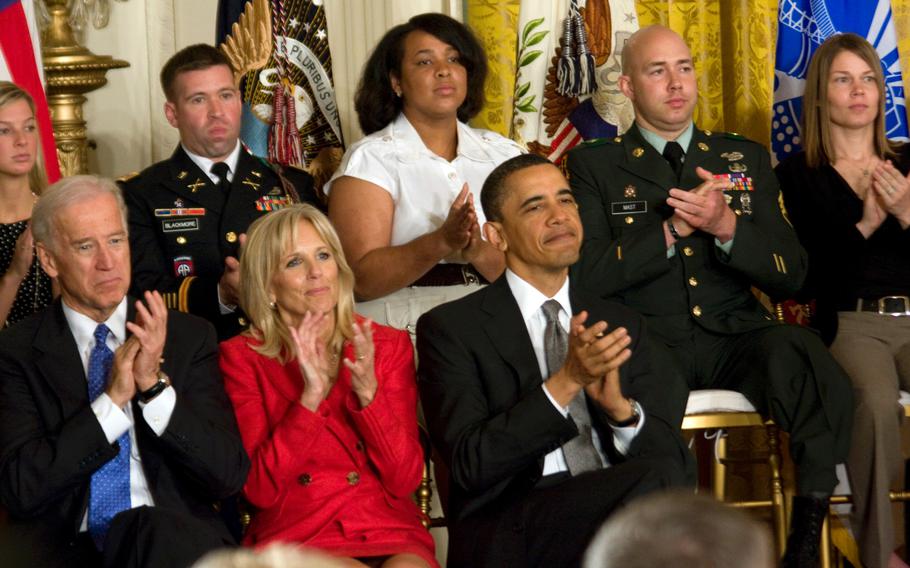 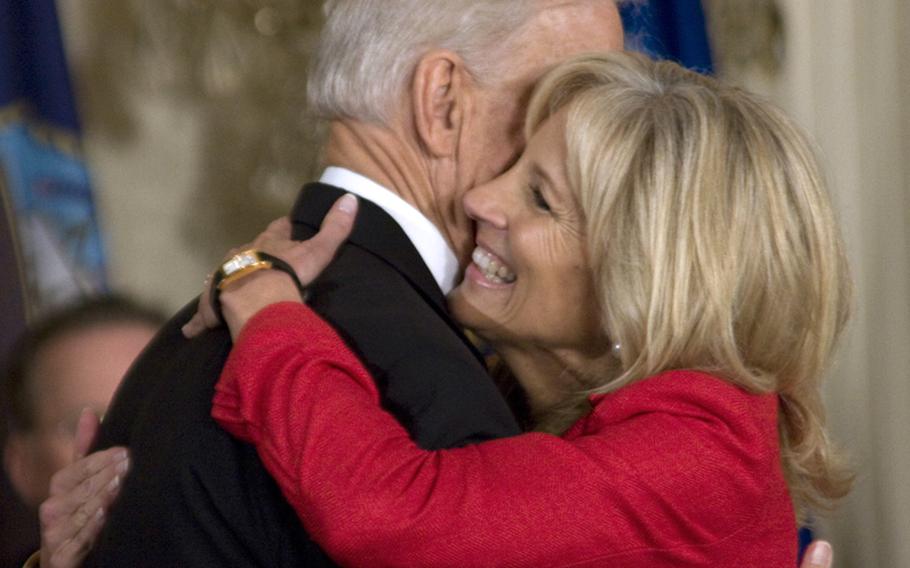 Buy Photo
Vice President Joe Biden gets a hug from his wife, Dr. Jill Biden, after he introduced her at Tuesday's White House event. (Joe Gromelski/Stars and Stripes) 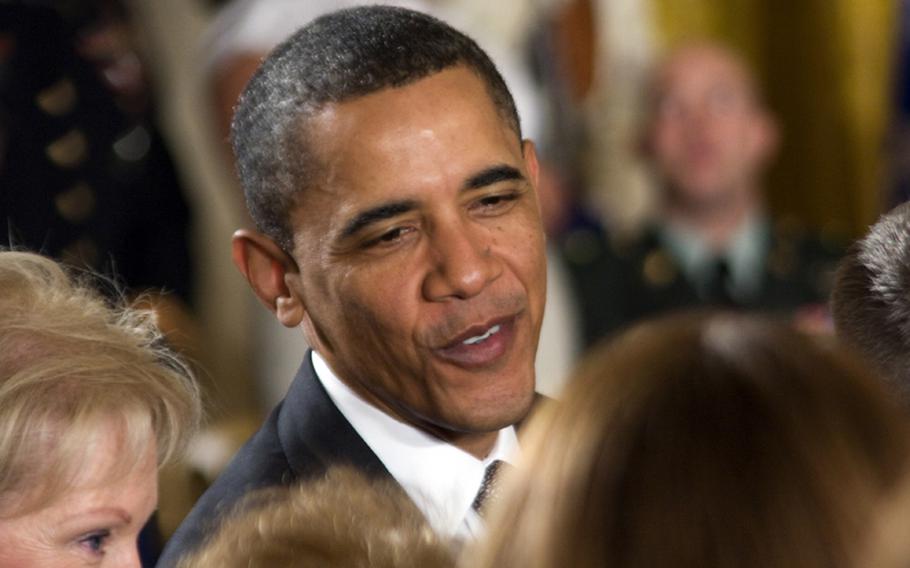 &ldquo;This is a challenge to every segment of American society to take action, to support and engage military families in their communities,&rdquo; Obama said. &ldquo;It can be something as simple as mowing the lawn for that [military] family down the street. This is about the responsibility we have to each other as Americans.&rdquo;

Organizers of the Joining Forces campaign are already aiming higher than free lawn mowing. Officials from companies like Sears Holdings Corp., Wal-Mart Stores Inc. and Siemens Corp. have committed to expanded employment opportunities for military families. Groups like the U.S. Chamber of Commerce and the National Math and Science Initiative have promised more training and academic programs for military spouses and children.

Obama said that groups like NASCAR, Major League Baseball and Disney will create public service ads to highlight the needs of military families who have loved ones deployed overseas. Hollywood producers have pledged to feature military family issues and challenges in upcoming movies and TV shows.

In coming days, the first lady and Jill Biden, wife of the vice president, will travel to Colorado, North Carolina, Ohio and Texas to push the new initiative at press events with a host of celebrity guests: Jessica Simpson, Nick Jonas, Martha Stewart, and the cast of "Sesame Street."

The public relations campaign won&rsquo;t have any legislative force behind it. The initiative&rsquo;s mission statement includes tasks such as &ldquo;help employers create military family friendly workplaces&rdquo; and &ldquo;call attention to critical issues facing veterans and military families,&rdquo; but no substantive policy changes to force those moves.

Still, the high-profile attention on the issues from the White House is an important step toward providing better services and job opportunities for military families, according to Joyce Raezer, executive director of the National Military Family Association.

&ldquo;The first lady can&rsquo;t pass legislation, she can&rsquo;t pass new policies, but she can help make high-level connections,&rdquo; Raezer said. &ldquo;A lot of military families are still telling us that people don&rsquo;t know what they&rsquo;re going through. A lot of employers and others, all they need is that idea, that connection, so they can act.&rdquo;

The initiative will be coordinated by the Center for a New American Security, a Washington-based think tank with numerous ties to the Obama administration.

The three-member advisory board includes former Gen. Stanley McChrystal, who was fired by the president last summer after his staff made controversial comments about administration officials, and Patricia Shinseki, wife of Veterans Affairs Secretary Eric Shinseki.

At Tuesday&rsquo;s event, President Barack Obama said the new campaign will work alongside policy changes under way within the federal government, designed to increase job opportunities and quality-of-life programs for military families.

&ldquo;Americans in uniform have never served alone,&rdquo; he said. &ldquo;Behind every one, stands a wife or a husband, mother or father, son or daughter, brother or sister. They too are the reason we have the finest military in the world.&rdquo;

Jill Biden said when her son Beau was deployed to Iraq, every day brought new questions and concerns about his safety. Every thoughtful favor from friends and family helped ease that stress.

&ldquo;Imagine what these small gestures can mean not just for military families, but for soldiers serving thousands of miles away,&rdquo; she said. &ldquo;The families aren&rsquo;t in uniform, but they are all serving.&rdquo;