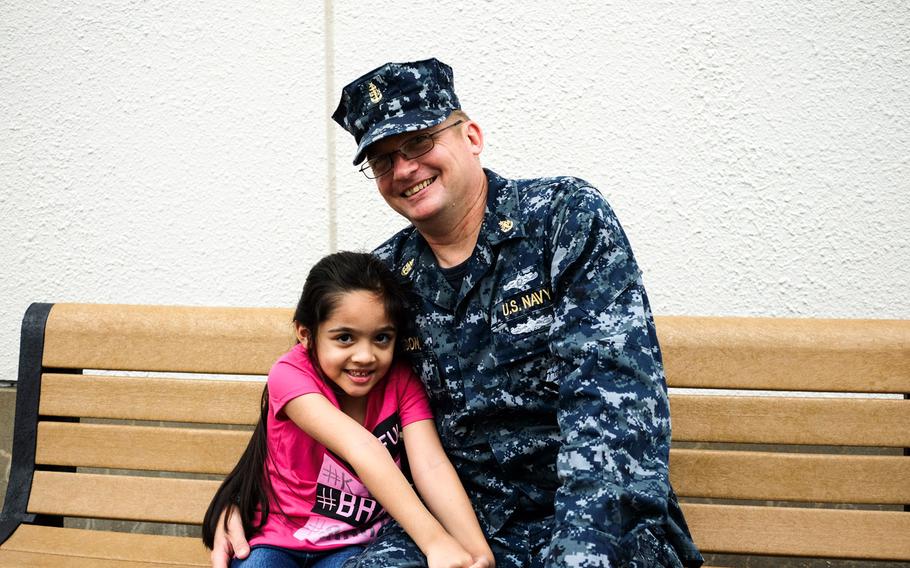 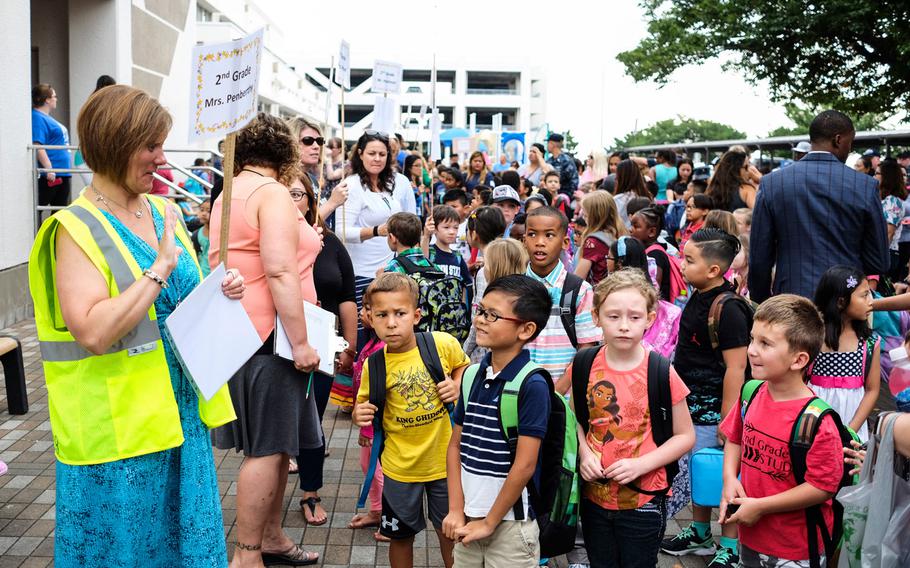 Buy Photo
Students wait with their teacher to begin the first day of school at Sullivans Elementary at Yokosuka Naval Base, Japan, Monday, Aug. 28, 2017. (Tyler Hlavac/Stars and Stripes) 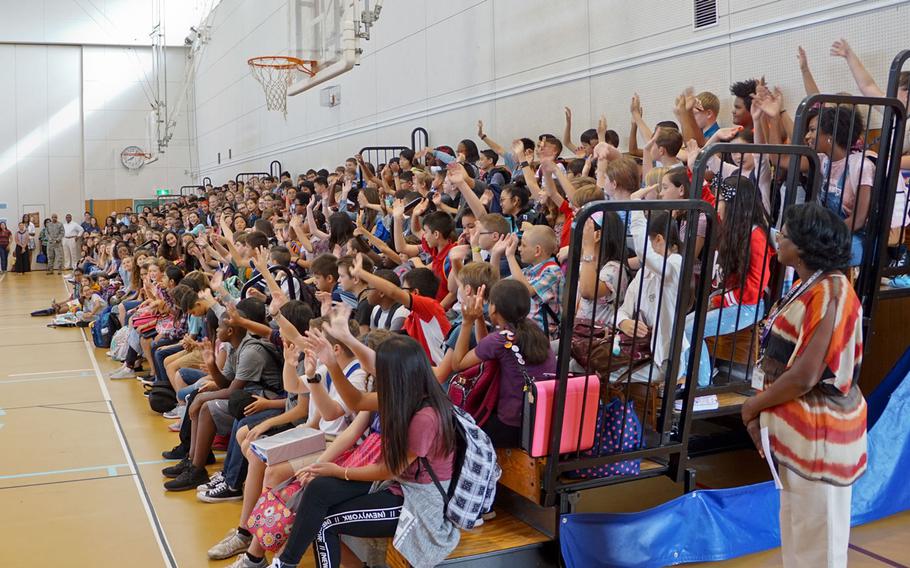 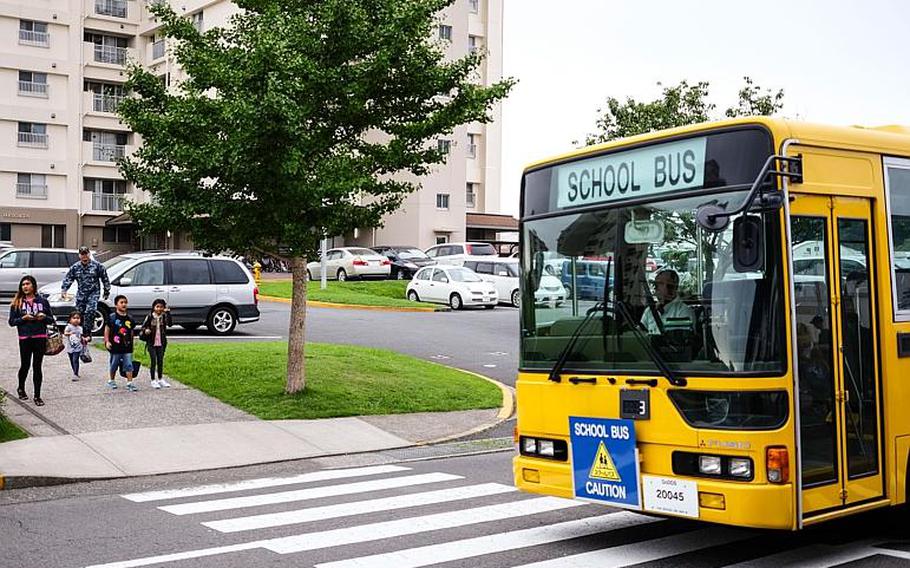 Buy Photo
A bus brings students to their first day of classes at Yokosuka Naval Base, Japan, Monday, Aug. 28, 2017. (Tyler Hlavac/Stars and Stripes) 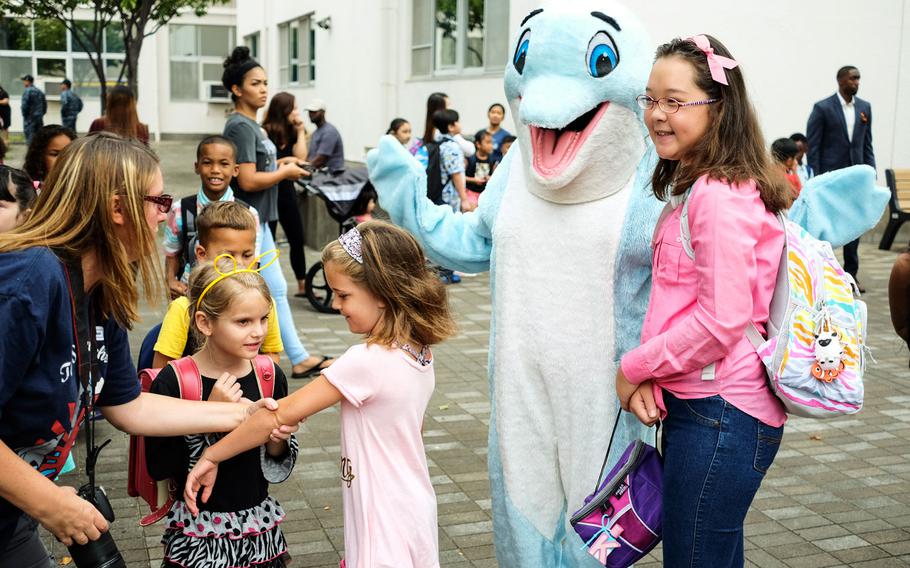 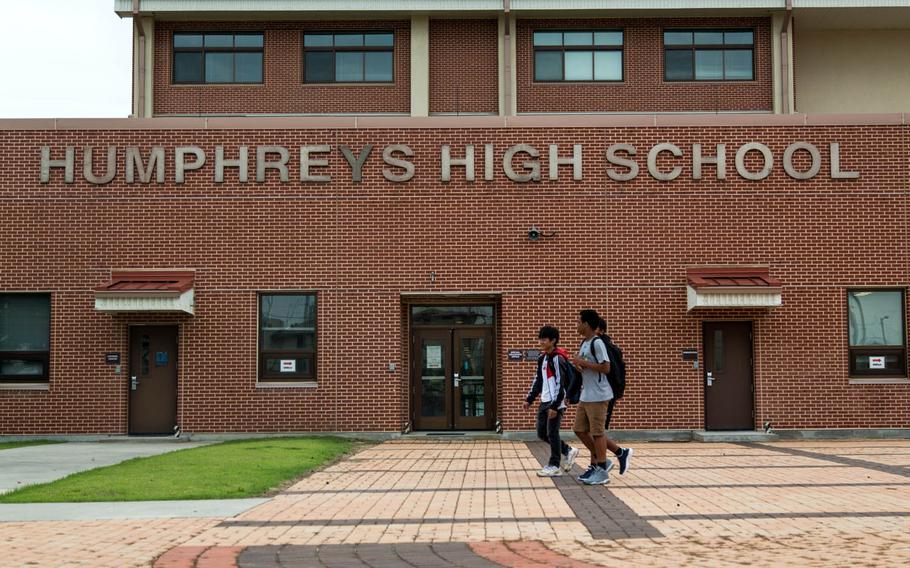 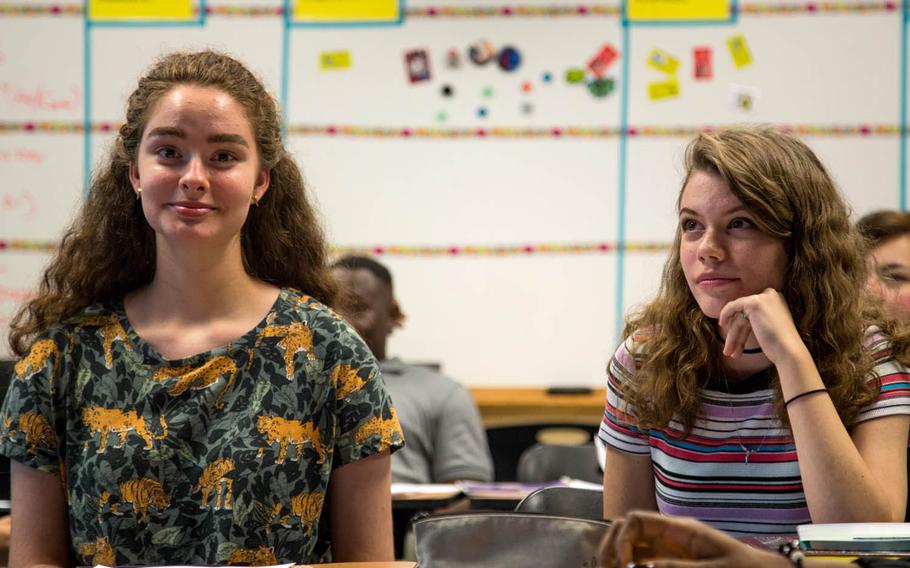 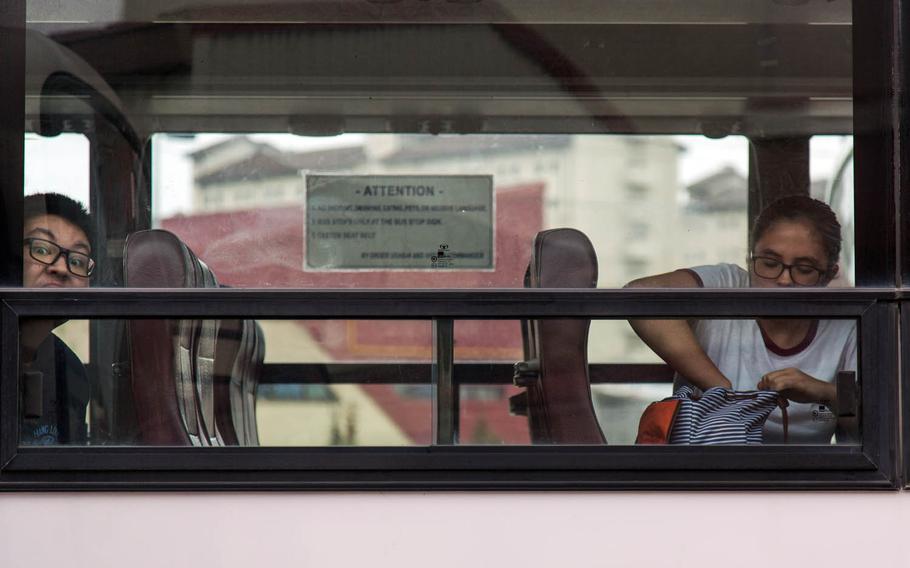 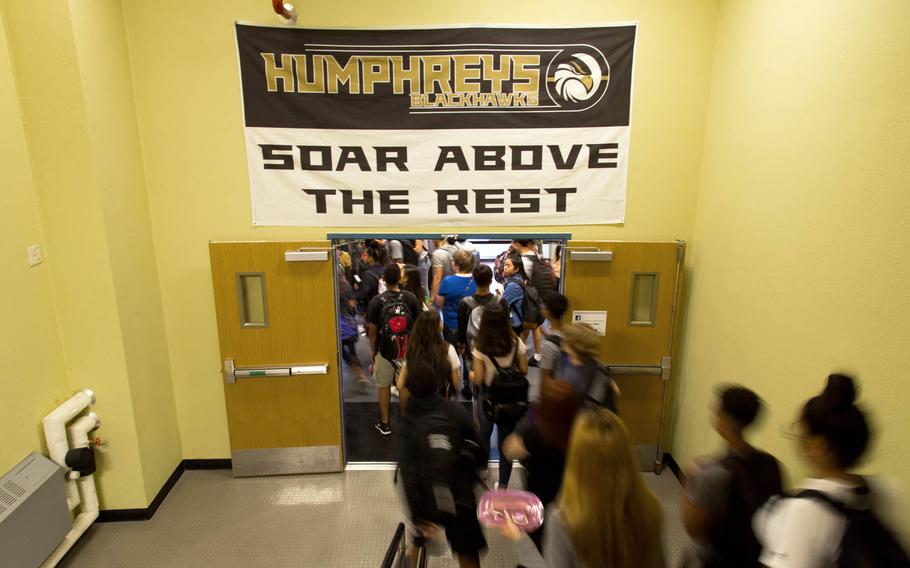 Buy Photo
Students rush for the doors at the end of their first day of classes at Camp Humphreys High School, Monday, Aug. 28, 2017. (Marcus Fichtl/Stars and Stripes)

Teachers welcomed thousands of students enrolled in Defense Department-run overseas schools as they arrived for their first day of classes on Monday.

Many of those schools have a lot more students than last year.

Students from first through fifth grade showed up at the DOD’s largest school, Sullivans Elementary at Yokosuka Naval Base, Japan. Capt. Jeffrey Kim, the base commander, rang the bell to begin their first day. The school has 1,181 students enrolled this year.

“Students, new parents here, welcome to Yokosuka, welcome to the Sullivans school and welcome to our community,” he told the crowd. “Please take the time to look around, say hello to old friends, meet new friends … we’re very proud that we have such an amazing organization.”

While some parents seemed relieved to have their kids back in class, the experience was bittersweet for others.

“She’s excited; daddy’s not excited,” said Senior Chief Larry Rigdon, whose 6-year-old daughter, Julianne, was starting first grade at Sullivans. “It was a long summer, so it’s good for them to get back to school and meet new friends. She knows she is going to meet a lot of new people. You only get them for so long before school starts.”

At Yokota Air Base in western Tokyo, sixth-graders at Yokota Middle School took in their new surroundings and searched out familiar faces.

“I’m nervous to be in a new school, and I’m scared I won’t have any classes with my friends,” she said.

“Looking back at our statistics, this is the first year in 10 years that we’ve had this high of an enrollment at the beginning of the year,” he said. “We had 562 students as of late Friday afternoon, which is just about where we spent the entire year last year.”

The influx caused a bit of stress and strain last week as they worked to add more classes, Racek added.

“But that’s part of being in the Department of Defense,” he said. “We’re flexible, and we work closely with all of our partners to make things happen.”

Across the base at the newly built Yokota High, teachers added final touches to their spotless new classrooms before students arrive on Tuesday. A few weeks ago, they began the process of moving out of the old school, built in 1973, and into the new, open-plan facility.

At Camp Zama, some students will begin classes Tuesday at a new super school created by merging the base’s middle and high schools.

“The biggest positive to come out of it is we are able to offer more elective classes for our middle school,” Louis D’Angelo, principal of the new Zama American Middle-High School, told Zama Pulse last week.

Hallways and classrooms are more crowded than usual at Camp Humphreys High in South Korea. The school has swelled by 196 students to 347 this year, thanks to the massive military transition to the Army base 40 miles south of Seoul. Middle-schoolers who used to share the building are out and new electives — from robotics and advanced classes in physics and art — are in.

Also new at Humphreys is principal Erin Grazak, a 19-year DODEA veteran who’d been an administrator in Seoul for the past half-decade.

“The goal was to meet them, greet them and get them to class,” she said of her new students.

Payton Perryman, 16, a senior who’s among those who transferred from Seoul, is taking extra classes online to graduate early. “I’m trying to go back to Florida,” she said. Antonio Martin, a senior who recently arrived from Watertown, N.Y., is also eager to put on his cap and gown.

“I’ve been excited for an entire year to come here,” he said. “I just want to graduate.”

Monday held no surprises for Norelle Eoyle, a freshman who recently transferred to Humphreys from Washington state.

“I came to school expecting a normal day, and so far it’s gone just as I thought it would,” he said.

The 14-year-old expressed just one goal for his first day.

“I want to go home with knowledge,” he said.