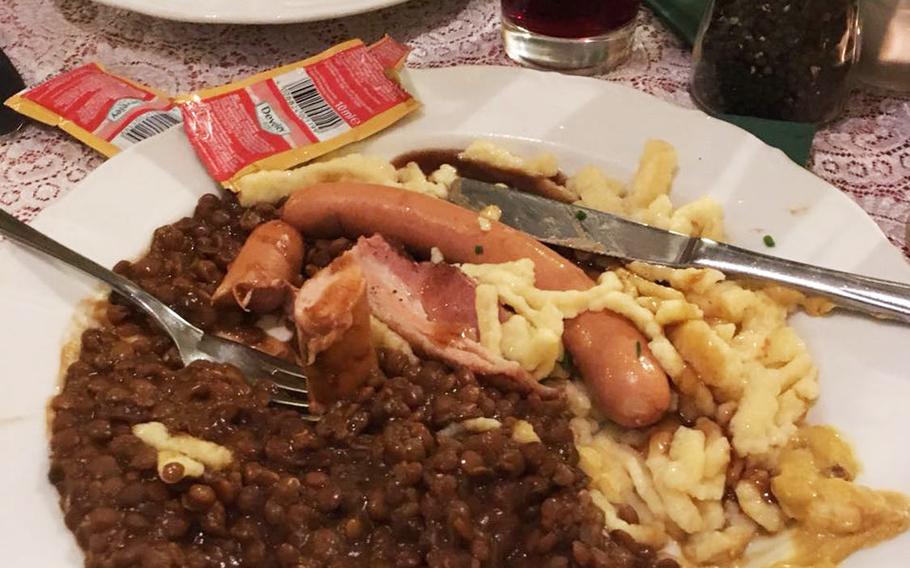 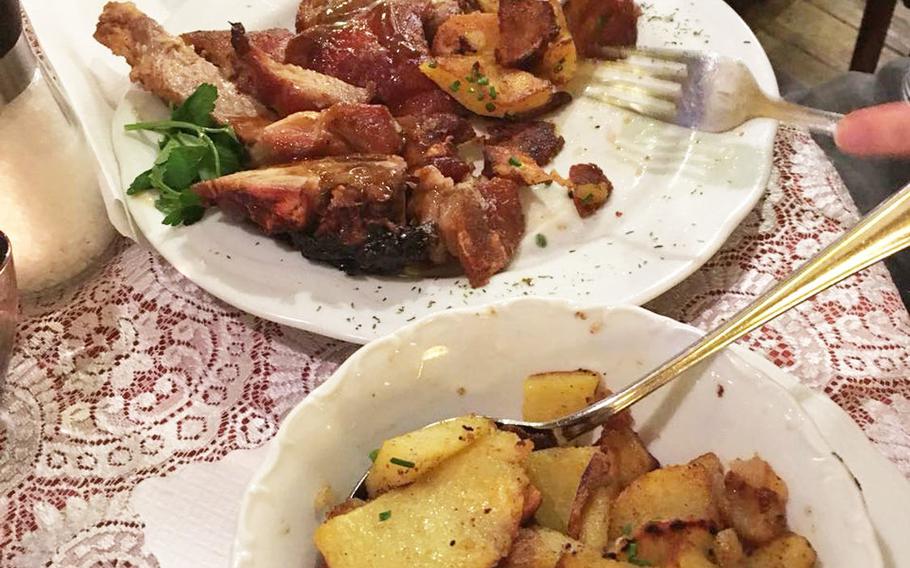 Buy Photo
The menu at Weinstube Kachelofen in Stuttgart, Germany, is heavy on meat offerings, with dishes such as a slow roasted suckling pig. (John Vandiver/Stars and Stripes)

I figured we’d beat the crowd as we shuffled in from the cold for an early dinner at Weinstube Kachelofen, a cozy downtown eatery with an old-time Swabian feel.

But I forgot it was game day in Stuttgart, where the local soccer club had just eked out a late-afternoon upset over rival Frankfurt. Droves of jersey-wearing Stuttgart VFB fans, apparently hungry after the big win, were looking to celebrate local style. Luckily, we squeezed inside in the nick of time, grabbing one of the last tables at one of Stuttgart’s dining institutions.

There is a wide range of offerings at Kachelofen. I looked on in envy as one diner at a neighboring table was served a mound of the Swabian mainstay, Maultaschen, which look like supersized raviolis but taste completely different. There are also classic roasts, of pork, various stews and other hearty German fare.

I ordered an old faithful — Spaetzle (noodles) with lentils and a couple of hot dogs. But not to fret; German hot dogs aren’t really like their American counterparts. Here, hot dogs are firmer and tend to have a hint of smoky flavor. They snap a little when you bite into them, unlike American ones, which often tend toward rubbery mush.

The dish was savory and up to standard. I washed it down with a beer. My dining partner went with the Spanferkel, which is basically a piglet roasted on a spit. It was tender and served with a side of country-style potatoes.

The drink menu is refreshingly no-nonsense. No craft concoctions. No IPAs. Just old-fashioned German beer brewed to reliable purity law standards — predictable and good. Since it’s a Stuttgart institution, Kachelofen gets its beer from the local Schwabenbraeu brewery.

The wine menu also is mainly regional. And while not really up to the standards of neighboring France, varieties like Trollinger and Lemberger are loved by the locals. Various statistics say Stuttgarters drink twice as much wine as the national average, and much of the consumption seems to happen in cozy wine bars like Kachelofen. A glass of most of the wines here will cost you about 4 euros ($5).

On this visit, the diners seemed an even split, with the soccer fans favoring the beer.