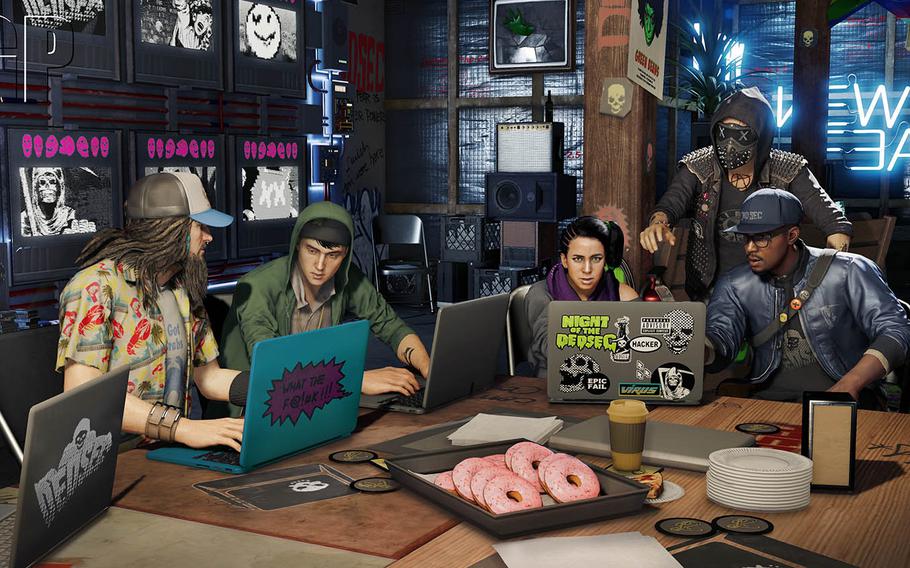 Play as brilliant young hackers who live in San Francisco, the cradle of technological civilization, in "Watch_Dogs 2." (Ubisoft)

The developers of “Watch_Dogs 2” depict hackers as digital Robin Hoods taking from the rich to help the poor.

The merry men and woman of DedSec are dead set on taking down Blume, an immense corporation that invades people’s privacy through myriad devices and uses the data to make a profit and control the public. Sure, DedSec itself might steal a bit of your cash, your identity and your privacy, but none of those crimes seem to be a big deal because the hacktivists are out to stop a bigger thief. It’s definitely the 21st-century equivalent of Sherwood Forest logic.

In Ubisoft’s mature-rated game, you play as Marcus Holloway, whose primary weapon is a smartphone that can accesses almost any device connected to the “Internet of things.” As the game progresses, Marcus gains access to additional tools, such as small wheeled and aerial drones, explosive devices and a wide selection of firearms.

The story unfolds in 15 missions that bring Marcus and his crew closer to undermining Blume. Along the way, they must deal with a cult, gangs, other hackers, tech companies and an aerospace corporation, each touched by Blume’s tentacles. The story is generally light, but remains interesting and the characters are far more interesting than those of most other open-world games.

The first step in most missions is to gain access to the targeted facility. This usually involves a combination of physical and electronic breaking and entering.

You’ll quickly scan the area using “Nethack,” which highlights any devices that are connected to the Internet. Most doors, security cameras, heating units, electrical boxes, construction cranes, forklifts and air vents are wired — and available for your use if you work to unlock them. In addition, anyone with a smartphone is at your mercy.

You can zip from camera to camera looking for devices that control doors and for guards who have security keys. When stationary cameras aren’t enough, you can turn to your drones to scope out the area.

In many cases, security measures can be overcome only by way of a physical hack. Marcus must sneak in to personally do the work, or he must guide his wheeled drone to the spot so it can do the deed remotely. The final hack usually involves completing a puzzle that’s akin to unlocking a pathway for the information to follow.

Somewhere along the way, you’ll probably have to deal with some pesky security personnel. You can use devices in the environment or a guard’s own smartphone to deliver a distraction, stunning shock or lethal blast. As you advance in your hacking abilities, you can even tag him for arrest by the police or a beat down by a street gang.

Once you’re inside, you’ll need to commit your cybercrime. This could be downloading sensitive files, overloading a power grid or inserting a new motherboard into a satellite that’s about to launch.

This entire process is basically one big puzzle with several possible solutions.

However, if this seems like too much effort, you can always rely on your sniper rifle, grenade launcher and shotgun. Marcus can’t take a lot of damage, so you can’t dive into a situation with guns blazing. However, mixing hacker skills with gunplay can hasten the journey to success — even though it seems a bit like cheating.

Security’s guards aren’t the only potential victims of your hacking skills. You can target almost anyone on the street and steal from their bank account, listen to their calls or read their texts. Of course, this would seem to make you just as bad as Blume — differing only in the scale of the misdeed.

In addition to the main set of missions, the game offers a large number of side missions and challenges. These dot a large open world that consists of parts of San Francisco, Oakland and Silicon Valley. They include hacking challenges, driving for an Uber-like service, tackling a motocross course and searching for stashes of extra cash.

The game also offers online co-op and competition. You can team with another player for a mission against one of the game’s factions or you can compete against others in the cat-and-mouse modes known as bounty hunt and hacker invasion. Because of technical difficulties, some online functionality was unavailable during the first week after the game’s release, but it seem to be working now. The online challenges add a bit of the fun to the game but are really tangential.

The graphics are pretty good for an open-world game, and very good in the cut scenes.

The controls can be a little sloppy, especially when driving cars or controlling drones. Fortunately, you don’t have to drive a whole lot because the game has an excellent fast-travel system that’s available from the start.

The game receives a mature rating for profanity, alcohol abuse and at least one strip club. The profanity is constant and pointless.

“Watch_Dogs” might not deliver any hard-hitting commentary on cybersecurity, but it does offer a fun romp in a digital playground.