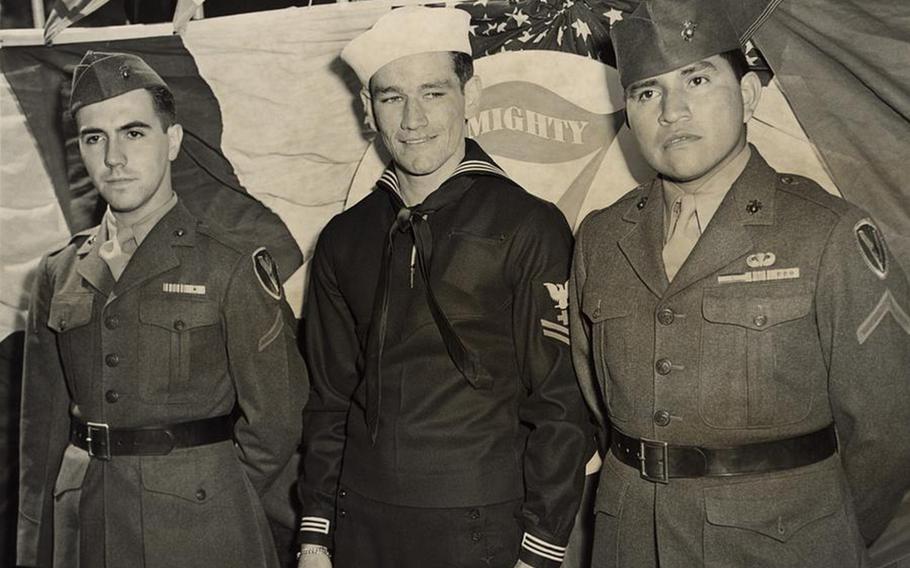 Survivors of Iwo Jima flag raising, including Marine Cpl. Ira Hayes, right, at the unveiling of a statue in New York, May 11, 1945. (Library of Congress)

WASHINGTON — U.S. military service has been inextricably linked with Native Americans for 200 years, despite violent clashes between the government and tribes over treaty obligations, civil rights and occupations.

Given that blood-soaked history, what drives Native Americans to serve? The answer reflects the same ideal that has led millions of others to sign up: pride in their nation.

“Most people who know anything about American Indian history know they don’t have much to be pleased about with our government and the way they were treated by non-Indians,” said Herman Viola, curator emeritus of the Smithsonian's National Museum of Natural History. “Yet, fundamentally they are very proud of their land.”

Lakota Sioux tribesman Sgt. Daniel Two Crow, an Army mechanic with the 3rd U.S. Infantry Regiment (The Old Guard), says what happened in the past had no bearing on his decision to serve.

“It was a tragedy, the way the entire situation was handled, but it’s past now,” he said. “Holding a grudge against somebody who didn’t have anything to do with it isn’t going to change anything.”

Rebecca Trautmann, project coordinator for the planned National Native American Veterans Memorial on the grounds of the Smithsonian’s National Museum of the American Indian in Washington, said American Indians have served in higher numbers per capita than any other ethnic group in the U.S. There are currently about 140,000 living American Indian veterans, according to the Department of Defense.

From that high level of commitment came some of the most storied moments in American military history.

Marine Cpl. Ira Hayes, one of the legendary flag raisers on Iwo Jima in 1945, was Native American. Army Master Sgt. Woodrow Keeble singlehandedly charged a fortified machine gun nest in 1951 during the Korean War, an action that resulted in his being posthumously awarded the Medal of Honor in 2008 – the first full-blooded Sioux Indian to receive the nation’s highest military honor, according to the Army. He also served in World War II with the North Dakota 164th Infantry.

Twenty-six other Native Americans also earned the Medal of Honor.

Most people are familiar with the success of code talkers. Cherokee and Choctaw Indians were involved with the coded communications effort in World War I. In World War II, 29 Navajo men provided one of the only unencrypted ciphers of the war, and they were considered instrumental in the U.S. victory. Chester Nez, the last surviving member of the original Navajo Code Talkers, died in 2014.