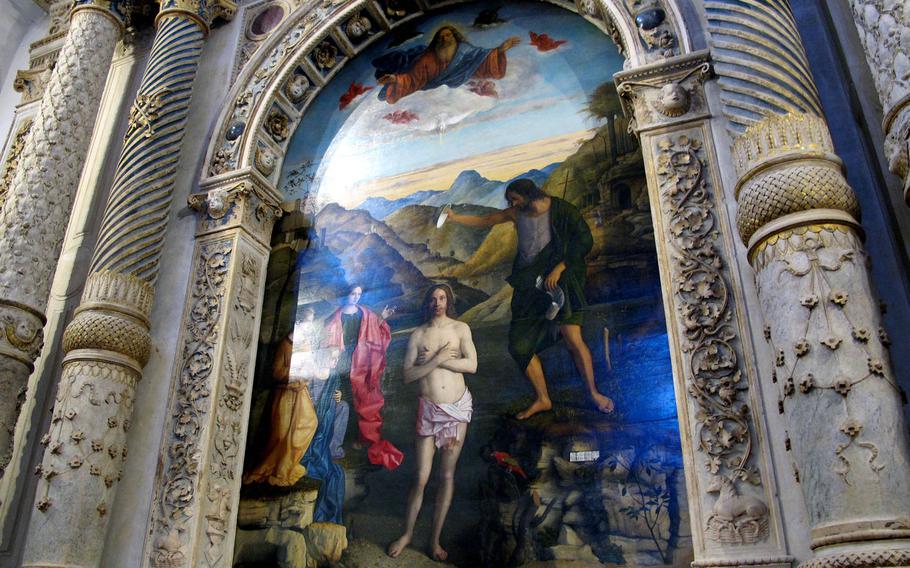 Buy Photo
"The Baptism of Christ" by Giovanni Bellini dates to 1500 to 1502 and is considered the crown jewel of the paintings in the Chiesa di Santa Corona in Vicenza, Italy. (Nancy Montgomery/Stars and Stripes)

Buy Photo
"The Baptism of Christ" by Giovanni Bellini dates to 1500 to 1502 and is considered the crown jewel of the paintings in the Chiesa di Santa Corona in Vicenza, Italy. (Nancy Montgomery/Stars and Stripes) 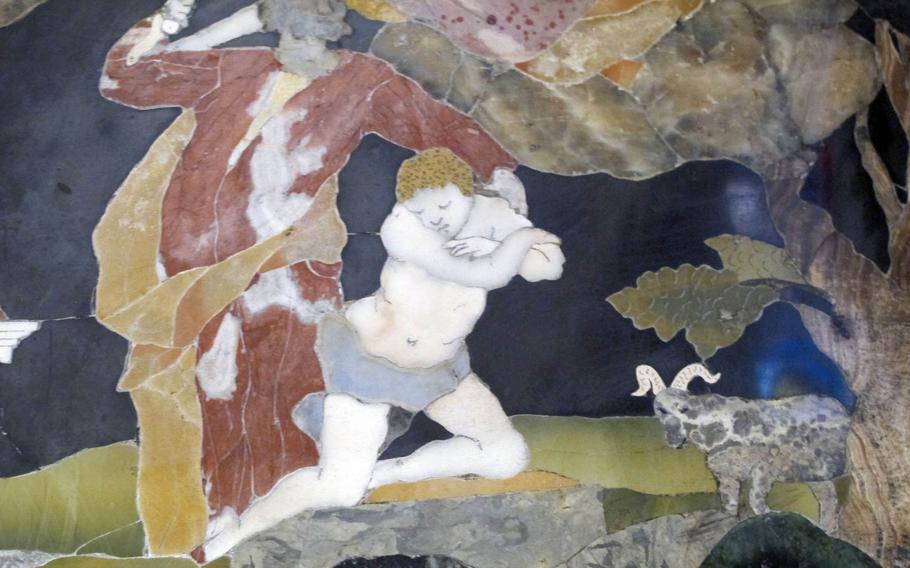 Buy Photo
Among the beautiful art works in Vicenza's Chiesa di Santa Corona is the fabulous mosaic altar depicting scenes from the Bible as well as fanciful flowers and animals. Here, Abraham is about to slay his son, Issac. (Nancy Montgomery/Stars and Stripes) 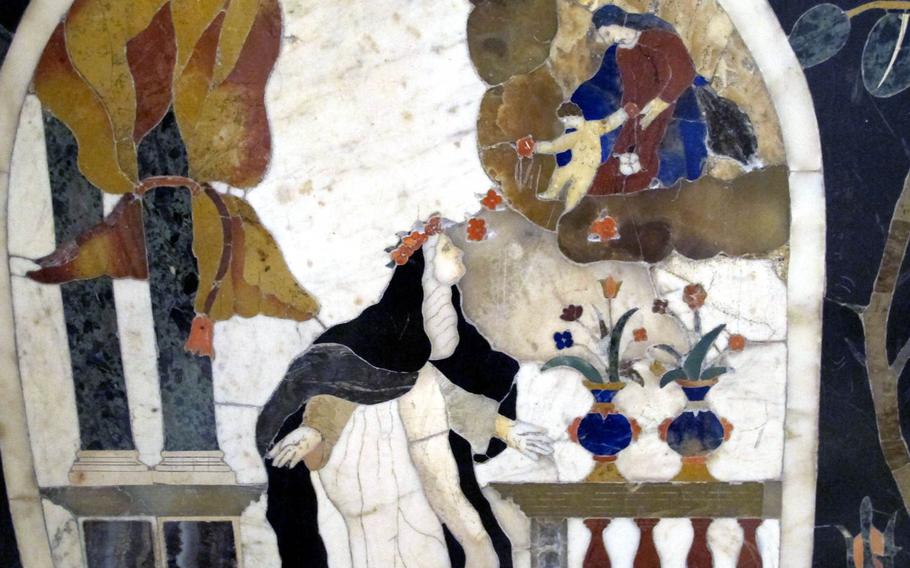 Buy Photo
Among the beautiful art works in Vicenza's Chiesa di Santa Corona is the fabulous mosaic altar depicting scenes from the Bible. This pretty scene might or might not be the baby Jesus tossing roses to his grandmother, Saint Anne. (Nancy Montgomery/Stars and Stripes) 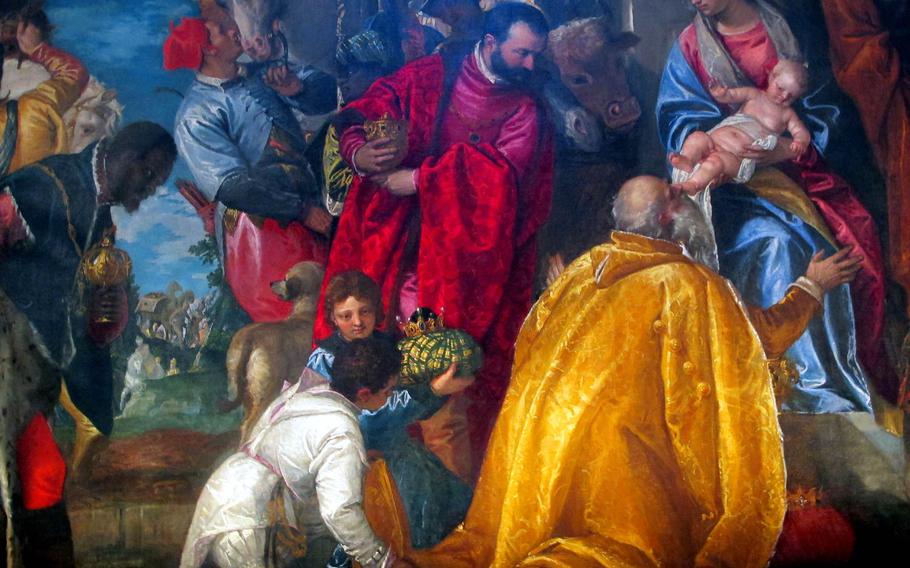 Buy Photo
"The Adoration of the Magi" in the Chiesa di Santa Corona was painted in 1580 by Paolo Veronese and is lushly colored and crowded with people, animals and divinities. Notice the man kissing the horse. (Nancy Montgomery/Stars and Stripes) 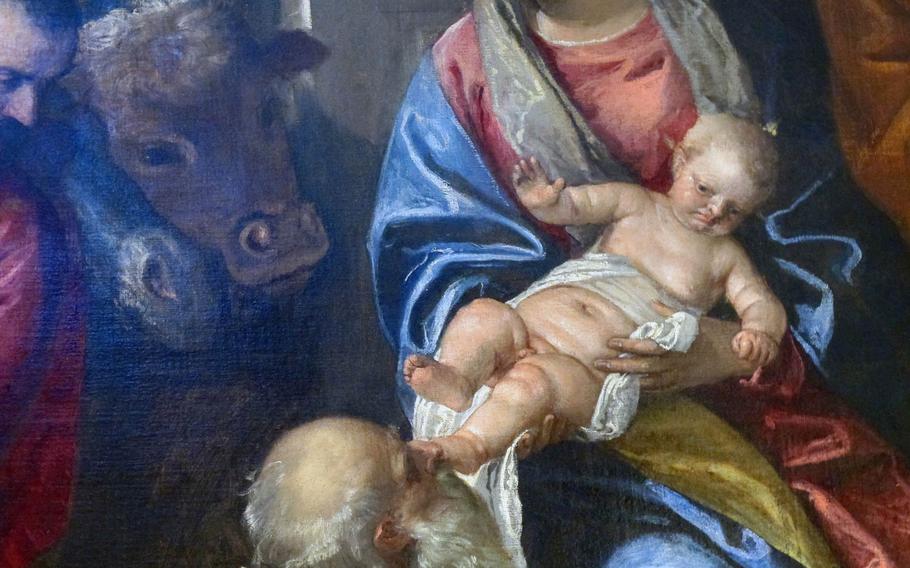 Buy Photo
A close-up of the baby Jesus in Veronese's "The Adoration of the Magi" in the Chiesa di Santa Corona in Vicenza, Italy, shows something rarely seen in Renaissance art: a baby Jesus who's none too thrilled that a Magi is kissing his foot. (Nancy Montgomery/Stars and Stripes) 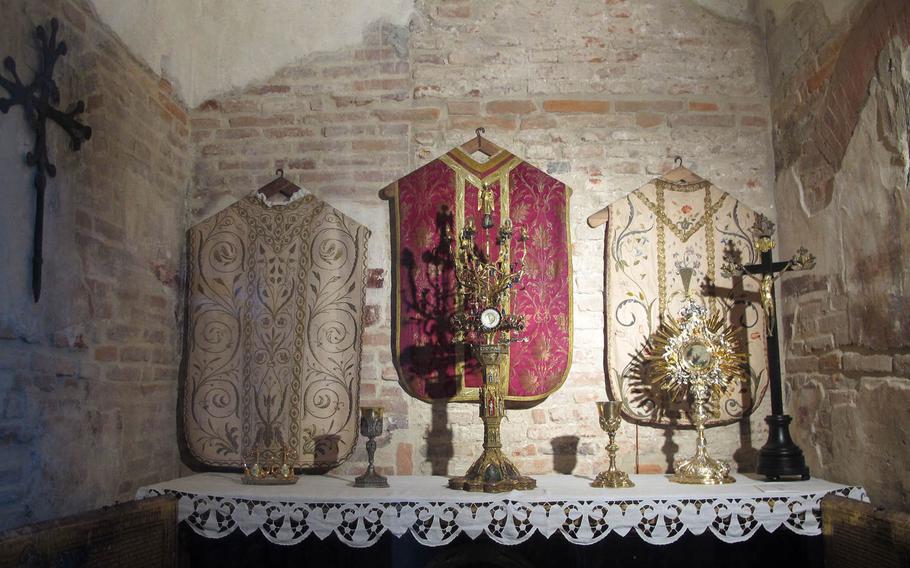 Buy Photo
The Chiesa di Santa Corona was built in the 13th century to house a gift to the city's bishop from French King Louis IX. The gift was purportedly a thorn from the crown of thorns Jesus was forced to wear in the events leading up to the crucifixion. (Nancy Montgomery/Stars and Stripes) 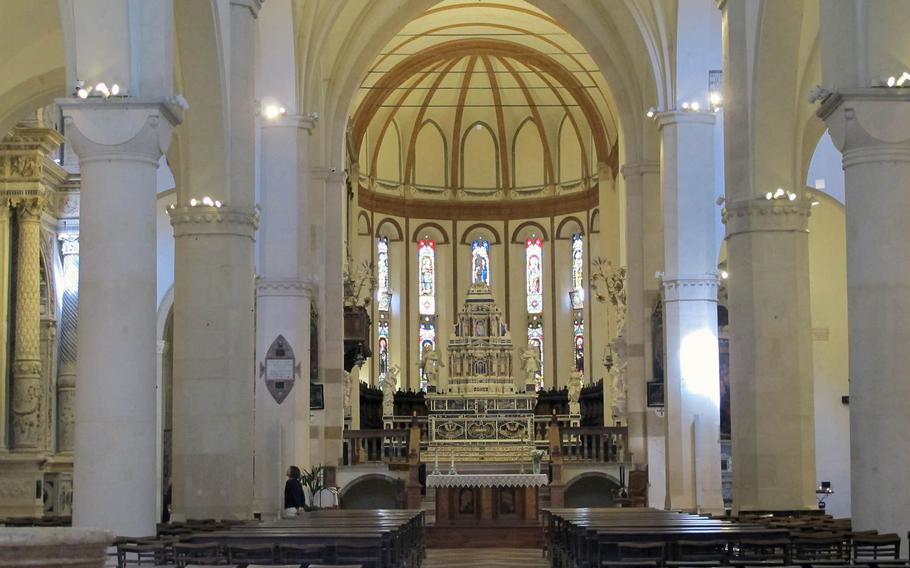 Buy Photo
The Chiesa di Santa Corona in Vicenza, Italy, is a municipal museum open most days of the week. Mass is celebrated there at 5:30 p.m. on Saturdays. (Nancy Montgomery/Stars and Stripes) 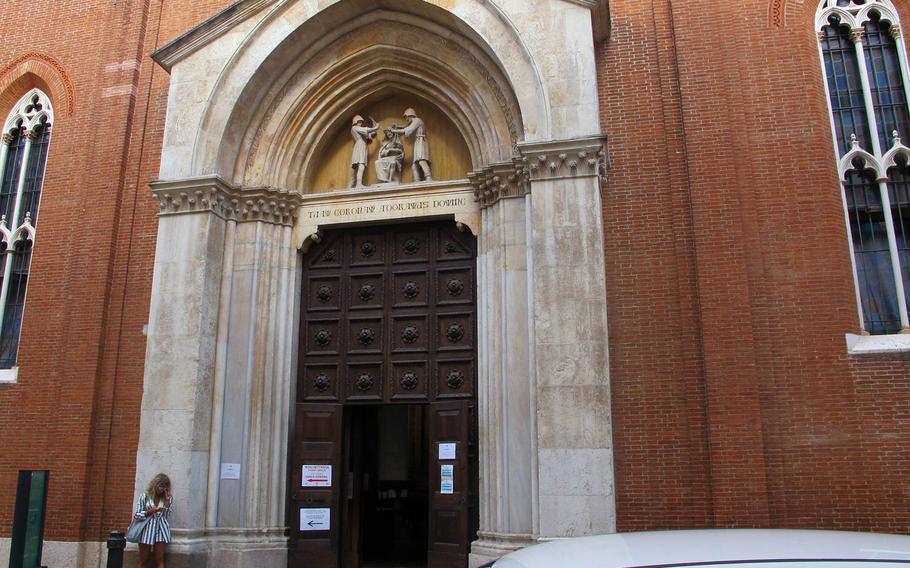 Vicenza is off the beaten path for most tourists doing obligatory tours of grand basilicas and duomos in Milan, Florence, Siena and Rome. Yet the city has a couple of churches that, though more humble, are beautiful, culturally significant and contain masterpiece art.

One is the Santuario della Madonna di Monte Berico, standing on a hill above the city. It was built in the 15th century to ask Jesus’ mother, Mary, to intercede with God to end the plague, which was killing a significant percentage of Vicenza’s citizens.

The other is in the heart of the old town. The Chiesa di Santa Corona — the church of the holy crown — is older yet, dating to the 13th century, built in the Gothic style to house a relic — a thorn from Jesus’ crown of thorns.

The thorn was provided by Louis IX, the only canonized king of France, who before he died of dysentery in the Crusades in 1270, was known for introducing the presumption of innocence into criminal proceedings, outlawing interest-bearing loans, burning Talmuds, and deciding that blasphemy would be punished by cutting off people’s lips and tongues.

Inside the church’s light-filled space are fabulous Renaissance paintings, a huge and gorgeous mosaic altar and the sound of Mozart or chanting monks playing softly, courtesy of the city’s museum authority, which now runs it.

Among the church’s treasures are two paintings made in the 1500s — Giovanni Bellini’s masterpiece “The Baptism of Christ,” and Paolo Veronese’s “Adoration of the Magi.” Nonreligious non-art majors might not fully appreciate the Bellini painting. But anyone could delight in the rich colors and peaceful, happy scene Veronese painted, with children, dogs, horses, humans and a baby Jesus clearly irritated that a stranger is kissing his foot.

Both the architect Andreas Palladio and the Italian writer who produced the work on which Shakespeare based “Romeo and Juliet” are buried in the church. The thorn is still theoretically there, encased in a golden reliquary.

But there’s a darker history as well.

The church was the seat for the local Inquisition authority that sought to stamp out heretics, witches, Jews, non-believers and other perceived threats to the Catholic body.

The church was run by Dominicans, the order founded in the 13th century to preach against Christian “heresies” — defined as a deliberate denial of an article of truth of the Catholic faith — then tapped to be judges in various Inquisitions or trials, which spanned centuries throughout Europe and were notorious for torture — including “reverse hangings” that dislocated shoulders, foot roasting and waterboarding — and execution by burning.

Vicenza had its own Inquisitors. One of them, in 1749, wrote to officials in Rome to say he needed more funds for the continued imprisonment of two local men. One worked in a shop that made felt hats. The other worked in a typography shop. Both had been arrested for allegedly casting love spells using consecrated hosts.

DIRECTIONS: Address is Contra Santa Corona 2, Vicenza, Italy 36100. There are parking lots nearby.

COSTS: Entry is 3 euros ($3.50). Prices are reduced for students and some other groups or by buying the city’s museum card for 7 euros that also allows admittance to several other municipal museums. Tickets are available at Archaeological Naturalistic Museum next door to the church and at the office next to the Teatro Olympico garden entrance.

FOOD: Scores of cafes and restaurants are located within a two-minute walk.