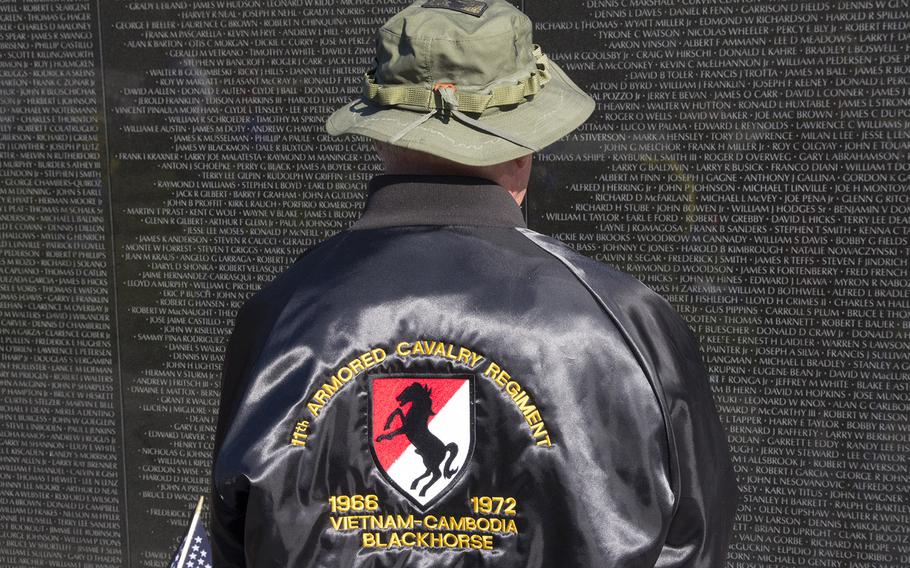 A Vietnam veteran pays his respects to fallen comrades at the Vietnam Veterans Memorial in Washington, D.C. (Stars and Stripes file photo)

By August this year many more thousands of Vietnam War veterans, those suffering from bladder cancer, hypothyroidism, Parkinson’s-like symptoms and even high blood pressure, could learn they will be eligible for Department of Veterans Affairs health benefits and disability compensation. Or perhaps not.

Difficult months of study lie ahead for a working group of senior scientists and health experts that VA Secretary Bob McDonald convened last week, following release of a 10th and final biennial review of evidence of health problems linked to Agent Orange and other herbicide exposures.

Every review in the series, going back two decades, has been conducted, as Congress mandated, by the Institute of Medicine (IOM), a division of the National Academies of Sciences. Its latest review, Veterans and Agent Orange: Update 2014, takes into account medical and scientific literature published from Oct. 1, 2012, through Sept. 30, 2014.

The IOM concludes that the research supports changing the strength of association to herbicide exposure for several ailments. For bladder cancer and hypothyroidism, it found “limited or suggestive” evidence of an association, an upgrade from previous “inadequate or insufficient” evidence.

This latest review looked again at scientific literature on cardiovascular conditions and herbicides. The IOM didn’t upgrade but it did affirm limited and suggestive evidence that hypertension may be linked to herbicides.

This review also considered whether conditions resulting in Parkinson’s-like symptoms, apart from Parkinson’s disease itself, should fall into the same limited or suggestive category of evidence. Yes it should, the IOM concluded, finding “no rational basis” for the current exclusion.

For only the second time, the IOM withdrew an earlier finding of that herbicide exposure may have caused an ailment, in this case spina bifida in children born to Vietnam veterans. For 20 years VA has used a preliminary finding of an association to grant children benefits. The IOM says it no longer believes the evidence merits retaining spina bifida in that category.

On March 9, the same day the IOM briefed senior VA officials on its report, McDonald ordered the VA working group convened to review not only the 1,100-page IOM report but original studies IOM refers to as well as any peer reviews on ailments and herbicides completed since October 2014, which would be research the IOM had considered in its final review.

Dr. Ralph Loren Erickson, chief consultant of post deployment health services for the Veterans Health Administration, is co-chair of the working group. He said the plan is to review carefully all of the studies and the IOM recommendations and then prepare “a response document” to be distributed “throughout our senior leadership, with suggestions and recommendations for action,” before presenting to McDonald for final decisions.

“No question when the [IOM] moves something to a higher category you can bet we will look even more closely at those particular diseases,” Erickson said. “It certainly is not within my purview to make any statement at this point as to how the secretary will decide. In the past there have been things in this (limited or suggestive evidence) category that have become presumptions, and there are things in this category that have not.”

The IOM says “llimited or suggestive” means the epidemiological evidence indicates there could be a link between herbicide exposure and increased risk for a health effect. For some ailments, including ischemic heart disease, past VA secretaries used “limited or suggestive evidence” to add diseases to the presumptive list. And yet for others, including hypertension, that same category hasn’t been viewed as enough.

Among provisions of the Agent Orange law Congress allowed to sunset last year was a requirement that the VA secretary take action on IOM recommendations within 60 days. Erickson said the working group hopes to give McDonald what he needs to make decisions on the IOM by late July.

“We feel that if we can move at a pace that gets this all taken care of within about four months, we’re be doing well,” he said.

It would be far longer before any veterans or survivors see more or higher disability pay, however. VA rulemaking following a decision to add diseases to the presumptive list involve writing and publishing proposed regulations, collecting and reacting to public comments, and then publishing final regulations, a process that could take more than a year with added delay possible from the change in administrations to occur in January.

Whatever decisions McDonald makes on the IOM recommendations will be “rooted in science” and “evidenced based,” said Erickson.

But doesn’t VA also take account of size of the population affected? For example, hypertension afflicts two-thirds of Americans age 65 and older.

It is true, Erickson said, that Vietnam veterans have moved into their 60s, 70s and 80s and many have chronic diseases of older age.

“Hypertension is one of them,” he said. “And so teasing those things out — [to decide] is it related to this veteran’s age [or] to their being in Vietnam where they were exposed to Agent Orange — sometimes can be difficult.”

Does it finally come down to a judgment call?

“Well, a judgment call based on the evidence,” Erickson said. “The secretary has made it very clear, certainly to me and to others who work on these types of technical working groups, he wants to know what does the science show? What does the evidence show?”

The final decision will be based on “whether the preponderance of the evidence will support a proposal of the new presumption,” Erickson said.

If McDonald does accept IOM recommendations, this review would be the first in six years to result in one or more diseases being added to list of ailments VA presumes are linked to herbicide exposure.

The eligible population would be any veteran who can show they stepped foot in Vietnam between Jan. 9, 1962 and May 7, 1975, including on ships in Vietnam’s inland waterways, also veterans who served in or near the Korean Demilitarized Zone any time from April 1, 1968, to Aug 31, 1971.