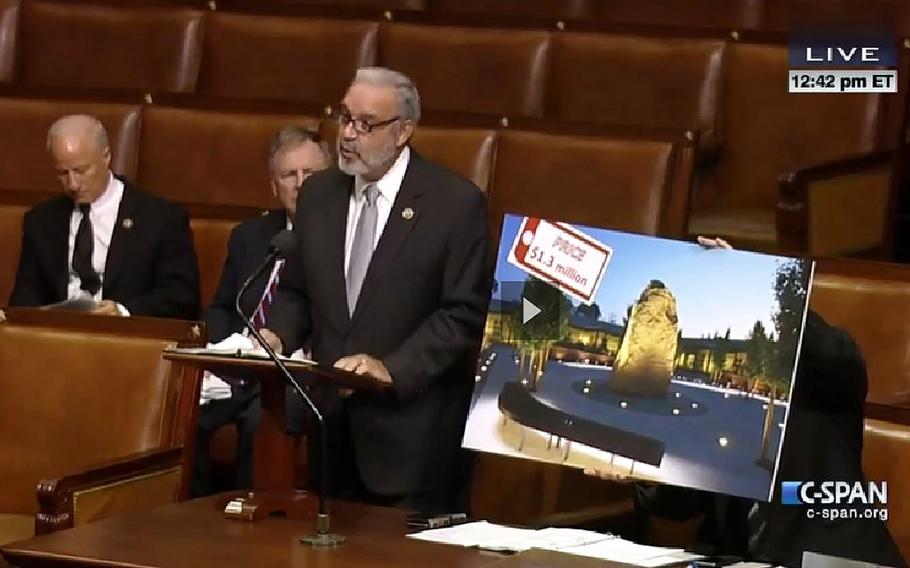 Rep. Jeff Miller, R-Fla., chairman of the House veterans committee, challenged Department of Veterans Affairs spending by using examples of public artwork at its medical centers. Shown is "Aggregate" by Phillip K. Smith, in the courtyard of the Palo Alto Medical Center. The sculpture cost about $483,000, and site preparation was more than $800,000. (CSPAN video)

WASHINGTON — The Department of Veterans Affairs ran its troubled Denver hospital project $625 million into the red, but it also might have made questionable art purchases, according to one congressman.

Rep. Jeff Miller, R-Fla., the chairman of the Veterans Affairs Committee, went to the House floor on Wednesday with poster displays of a rock sculpture and other installations that account for $6.34 million in recent art and consulting expenses at the VA Palo Alto Health Care System.

The massive rock at the mental health center in Palo Alto cost $483,000 and is part of a renovated $1.3 million courtyard. Cut into cubes with a laser and pieced together, the sculpture evokes “a sense of transformation, rebuilding, and self-investigation,” according to the designers.

Miller offered a different perspective Wednesday, citing the rock as part of a pattern of “wanton and abusive spending practices” by the agency. He also said the agency’s spending habits continue to be a problem even as Congress was faced with cleaning up the fallout from the mismanaged hospital project in Colorado this week allowing the $625 million in new spending.

“These projects include an art installation on the side of a parking garage that displays quotes by Abraham Lincoln and Eleanor Roosevelt in, wait for it … in Morse code that cost $285,000. It actually lights up,” Miller said.

The bill to raise the VA spending limit on the massively over-budget Denver hospital — despite grumbling among lawmakers — passed easily. A House vote Wednesday was nearly unanimous following a similar Senate vote last week because the legislation also authorizes continued spending on a raft of critical VA programs that few lawmakers want to see expire.

It also puts the Army Corps of Engineers in charge of any VA construction projects estimated at more than $100 million as a way to avoid the years of mismanagement and shifting plans that plagued the Denver hospital. The project was originally conceived in the late 1990s and later estimated to cost $328 million but has since ballooned to almost $1.7 billion.

Miller, who voted for the bill, said the agency continues to be irresponsible with its use of money, including $33.4 million through the third quarter of this fiscal year on conferences for staff.

“For example, as I address this House this afternoon, VA officials from across the country have gathered 40 miles away in Leesburg for a leadership conference that is costing the department $1 million,” he said.

The VA did not immediately respond to a request for comment Thursday on the criticism on the House floor over spending on art and conferences. In a statement released after the vote, it said the legislation prevents a shutdown of the construction site and gives needed budget flexibility to complete the project.

“We know we made mistakes in the development of this medical center, but we remain steadfast in our commitment to complete the state-of-the-art facility for Colorado Veterans and doing so while being good stewards of taxpayer dollars,” spokeswoman Victoria Dillon wrote in a statement.

The VA also received a stinging rebuke earlier this week for spending on staff relocation. On Monday, the VA inspector general found two senior executives misused their positions to improperly reap hundreds of thousands of dollars when they moved to new positions and that the agency used transfers to circumvent a freeze on raises.

The agency has proposed shifting about $200 million from its medical services budget and other construction to finish the hospital, now widely considered the biggest construction failure in the agency’s history.

“It is simply beyond me why VA would choose to pay to complete the Denver project by cutting medical services and medical facility dollars but not the exorbitant conference spending, or bloated relocation expenses or art,” Miller said.

Dina Titus, D-Nev., said she reluctantly supported the bill but was concerned about where the VA will get the additional money for the project, despite assurances the agency would minimize any impact on veteran health care.

“Now, we all believe that veterans everywhere including in Denver should have access to the best health care possible, but the funds for the Denver project should not come at the expense of veterans in Nevada and in other parts of the country,” she said.