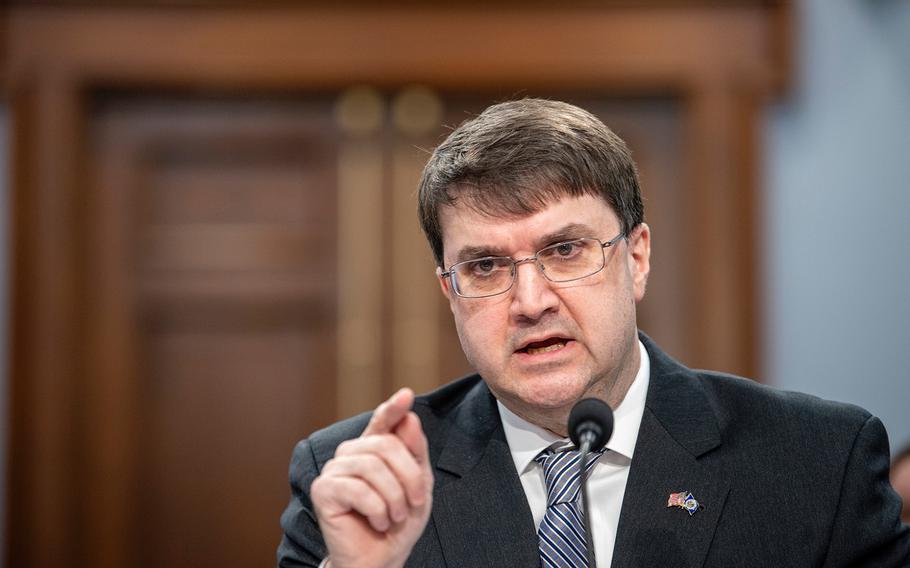 Veteran Affairs Secretary Robert Wilkie testifies during a House Appropriations subcommittee hearing on Capitol Hill in Washington on Tuesday, Feb. 26, 2019. Wilkie told members of the subcommittee that the VA will place Purple Heart recipients, "at the front of the line when it comes to claims before the veterans department." (Carlos Bongioanni/Stars and Stripes)

WASHINGTON — The Department of Veterans Affairs will start to give priority consideration to Purple Heart recipients in the spring when processing veterans’ benefits claims, VA Secretary Robert Wilkie announced Tuesday.

Wilkie announced the new policy at a House Appropriations subcommittee hearing, where lawmakers questioned him about various issues ranging from veteran suicide to problems at individual VA medical centers.

“I will be announcing that for those who hold the Purple Heart, the recognition of wounds taken in battle, we will now place [them] at the front of the line when it comes to claims before the veterans department,” Wilkie told the subcommittee.

The policy will apply to combat veterans with Purple Hearts who submit their initial claims for disability benefits “on or after April 1, 2019,” the VA said later in a news release. The change could lead to faster claims decisions for those veterans.

The VA already designates some veterans as eligible for priority claims processing because of advanced age, extreme financial hardship, a terminal illness or homelessness. Medal of Honor recipients and former prisoners of war are also given priority, according to VA policy.