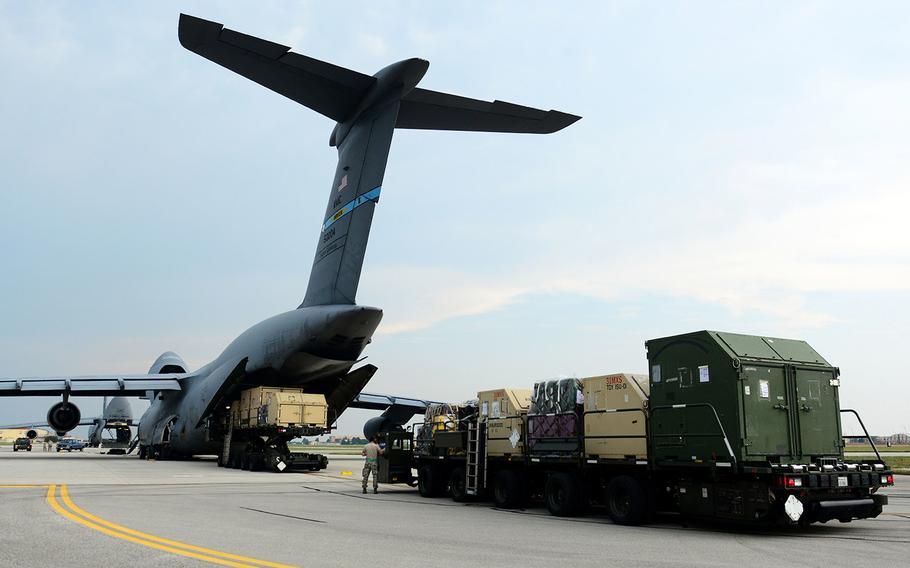 Cargo bound for Incirlik Air Base, Turkey, in support of Operation Inherent Resolve is loaded onto a C-5 Super Galaxy assigned to the 436th Airlift Wing, Aug. 8, 2015, at Aviano Air Base, Italy. (Deana Heitzman/US Air Force)

WASHINGTON – The U.S. has asked the Turkish government for approval to use a second air base in the country to launch air operations, a Pentagon spokesman said Monday.

The base would be used to conduct personnel recovery operations in the U.S.-led fight against the Islamic State, said Navy Capt. Jeff Davis. The location of the base and what kind of aircraft would be used have not been determined, he said.

It was unclear Monday whether the U.S. would be able to use the second base to launch offensive strikes against the Islamic State. Turkey last month agreed to open Incirlik Air Base to U.S. drones and fighter jets as part of an agreement for the two countries to work more closely together to diminish the Islamic State.

Turkey had been reluctant to allow U.S. forces to use the base for operations against the militant group’s targets. The NATO ally has since launched its own attacks on Islamic State militants.

Six U.S. F-16s and 300 airmen arrived at Incirlik on Sunday. The fighter jets should be striking Islamic State targets in Syria and Iraq in “a period of days,” Davis said Monday. The deployment of the manned aircraft is in addition to the unmanned aerial systems operating out of the air base.

The U.S. last week began flying armed, remotely piloted aircraft from the Turkish base. It conducted its first strike out of Turkey against an Islamic State target in Syria on Tuesday.

The opening of Incirlik and potentially other bases in Turkey, Davis said, puts U.S. aircraft closer to the fight against the Islamic State.

“You have greater flexibility in being able to move quickly to get aircraft (over targets) when they’re called upon,” Davis said. “You can increase your throughput – get down, drop ordinance, get back up, reload and get back on station -- more expeditiously.”