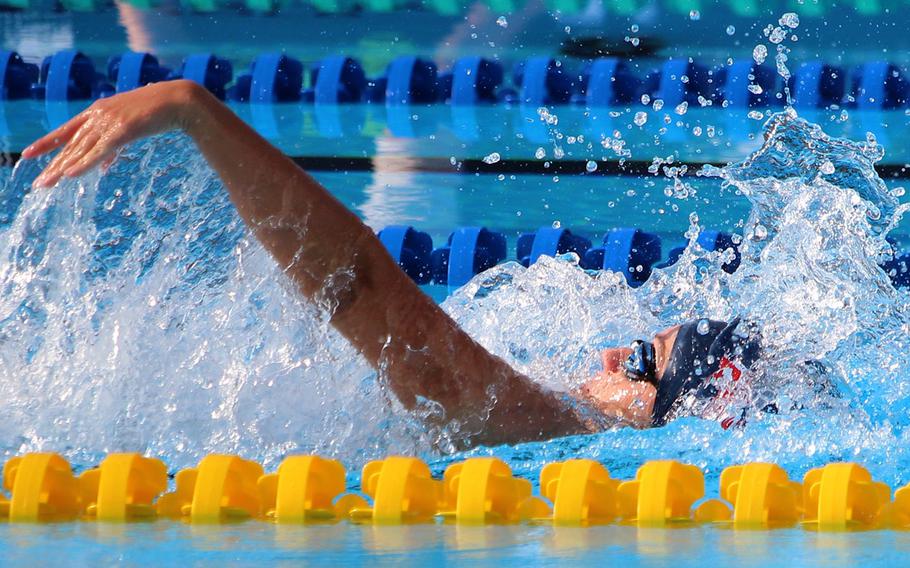 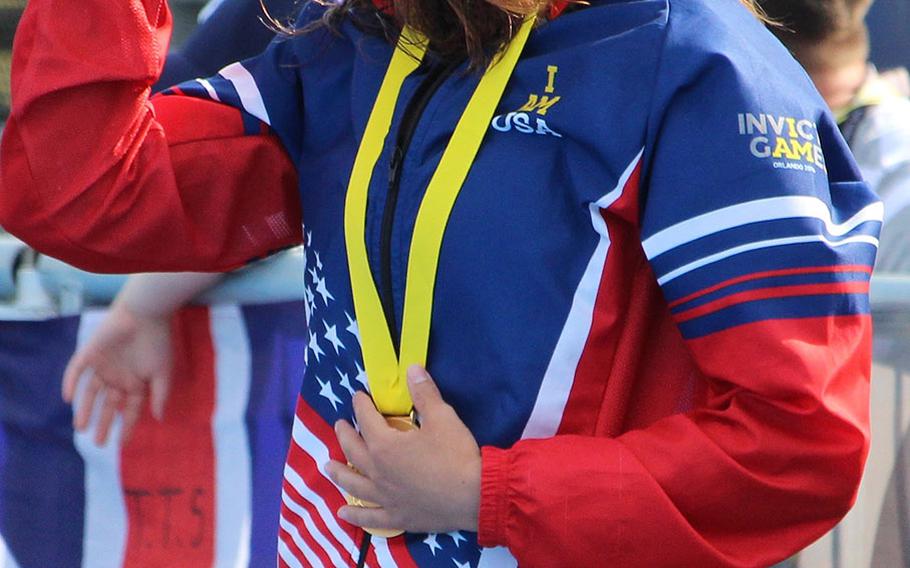 U.S. swimmer Elizabeth Marks waves to the crowd after winning a gold medal in the 50-meter backstroke at the 2016 Invictus Games in Orlando, Fla. ( Ken-Yon Hardy/Stars and Stripes) 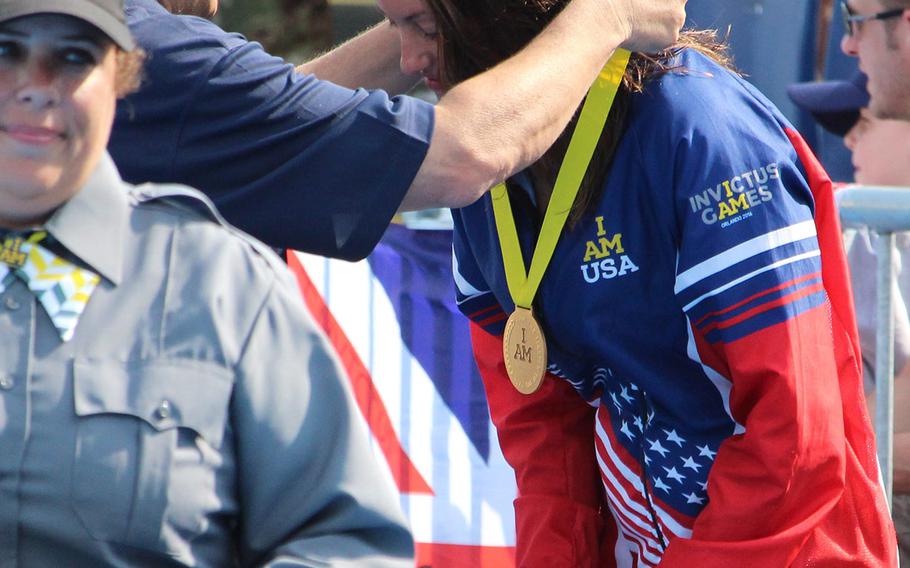 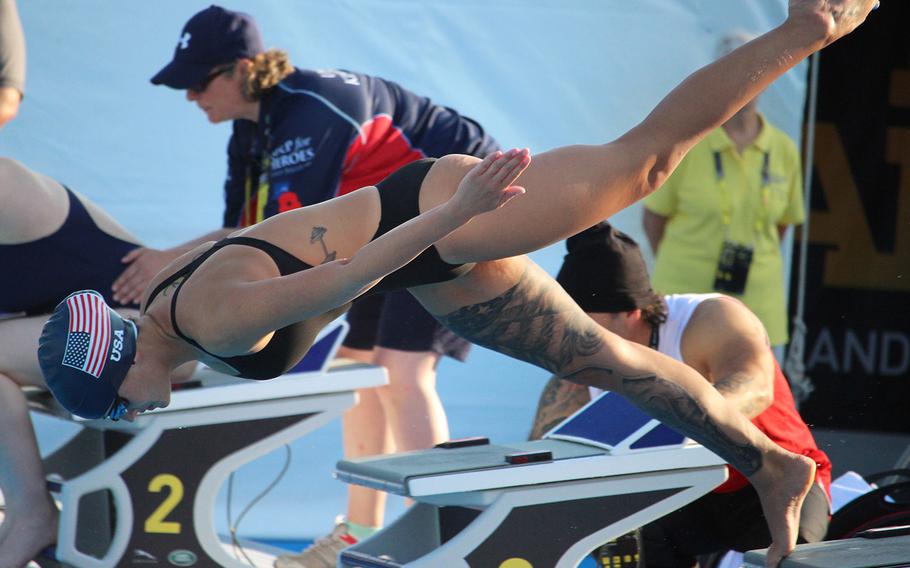 Elizabeth Marks dives into the pool for the 50-meter freestyle ISB at the 2016 Invictus Games in Orlando, Fla. The U.S. swimmer won four gold medals during the competition. ( Ken-Yon Hardy/Stars and Stripes)

ORLANDO, Fla. — The first thing you realize about U.S. Army Sgt. Elizabeth Marks is that if you want to know what the 25-year-old has endured, you will have to drag it out of her.

She would rather glance over her milestones – winning numerous medals, breaking records in adaptive swimming, being named to the U.S. Paralympic swim team – and head quickly to the subject she’s passionate about: a deep-seated love for servicemembers and how it keeps her pushing through severe pain to compete.

For her, swimming fulfills a mission to serve her fellow soldiers. But it comes at a price. With weak legs, damaged lungs and neurological injury, the things she loves the most also causes her tremendous pain.

“It’s excruciating,” she said. “But every second of the pain isn’t for me. It’s for the people who I can no longer stand beside. … It’s the way I give back, every day.”

Swimming, she said, is her “happy place.”

Marks has garnered some attention at this year’s Invictus Games at Walt Disney’s Wide World of Sports Complex. Prince Harry stopped to chat with her in the stands Tuesday while she was cheering her fellow American athletes during track and field competitions. Later, she joined him at his request for an interview that will air on ESPN.

On Wednesday, after Marks won gold in all four of her swim competitions, Prince Harry placed the final medal around her neck.

None of the attention is about her, she said. It’s about standing as an example to other wounded servicemembers who haven’t found a way forward from their injuries.

“It’s about showing them there’s another path and they are welcome,” she said. “The only way we can lose here is if someone feels alone.”

In 2010, Marks suffered bilateral injuries to her hips while serving as a combat medic in Iraq, under circumstances she guards as private. She underwent numerous surgeries to help her regain mobility, but her legs remained weak.

Wanting to be found fit for duty, she turned to adaptive sports.

Her first swimming lesson was in January 2012, and within months, she enrolled in competitions. By July, just six months later, she was found fit for duty and was accepted into the Army’s World Class Athlete Program, which allows active-duty military to train.

When she flew to the Invictus Games in 2014, Marks believed she’d been through the worst of it. But in what she describes as a surprisingly rapid onset, she collapsed with respiratory failure just before the games and landed in Papworth Hospital near Cambridge, the UK’s largest cardiothoracic hospital.

She nearly died there. Her lungs were full of fluid and, unable to tolerate a respirator, she ended up in an induced coma and was connected to an external lung machine called Extracorporeal Membrane Oxygenation to keep her alive.

Marks believes that had she not fallen ill in such close proximity to Papworth’s world-class care, she would not have survived.

As it was, her condition remained precarious throughout the games, and she had no idea that her fellow teammates painted the symbol #4W -- her last name at the time was Wasil -- on their faces or bodies to honor her during the competition.

When she woke up, one of the first things she saw were photos of her teammates with their painted faces.

Back into the water

Doctors told Marks that most would have died from the illness that struck her. She had survived because she was strong. Swimming had saved her.

As soon as she was able, she went right back to it.

Getting back in the pool was challenging. Because of thelife-support machine, her lungs were damaged. It hurt to hold her breath, and exertion was deeply painful. She had less stamina and she also suffered neurological damage from the coma, so she loses her vision when she swims. She has to have tappers -- people standing at the end of the pool to tap her on the head as she approaches -- so she doesn’t run into the wall.

But Marks didn’t stop. She just tried harder. Her coach taught her how to take a deep breath despite the pain “and be OK with that,” she said.

When asked why she didn’t move on from swimming, she said the pain was worth it as long as she was still alive. “The most important thing is that we are living,” she said. “Most of us almost had that taken away.”

Besides, her father was a Vietnam vet and he taught her that nothing is too bad or too hard or too tough. She doesn’t see obstacles or challenges before her -- just goals. “I like to play with the boys. I gotta be stronger than them.”

There’s something else that keeps her in the pool. It’s the world that she and her teammates -- all of whom have overcome enormous obstacles -- have created. They are a family, like the one they lost when they were wounded and most were forced to leave the military.

“The feeling of being an athlete, being in the pool, is very special,” she said. “It’s another form of family.”

She is not willing to give up that connection. “It would be hard not to be determined or driven when you have people like my USA team behind me, beside me every step of my journey,” she said.

Taking care of her soldiers

As a combat medic, Marks said her job was to take care of her soldiers. Though she hasn’t done her normal duties since her injuries, she said she still feels her sense of duty.

She tries to show other soldiers the benefits of swimming and to inspire them to reach for more.

Teammate Michael Kacer painted 4W on his shoulder when Marks got sick in London. He was sporting it when he won a silver medal.

He was in the middle of the competition and was flagging. When he looked over his shoulder and saw the 4W, he remembered why he was competing. “Her drive, everything she’s overcome. She has refused to let us give up on ourselves.”

Inspired, he pressed on to win and sent her the silver medal. “I wouldn’t have gotten it without her,” he said.

Kacer, who suffered severe damage throughout his body from a rocket attack in Iraq in 2008, said Marks continues to inspire. At the preliminaries this year, she grabbed a Sharpie marker and walked from teammate to teammate, drawing little hearts on the inside of their wrists to remind them that they are loved.

“She’s the person I aspire to be,” Kacer said. “She’s got one of the biggest hearts of anybody I have ever met in life.”

On Wednesday, after receiving her final gold medal, Marks walked off the podium with Prince Harry.

Out of the limelight, she pulled off her medal and asked the prince to take it back to London.

She wanted to send it to the people at Papworth Hospital who saved her life.