US monitoring Russian ‘harassment’ of shipping near Ukraine 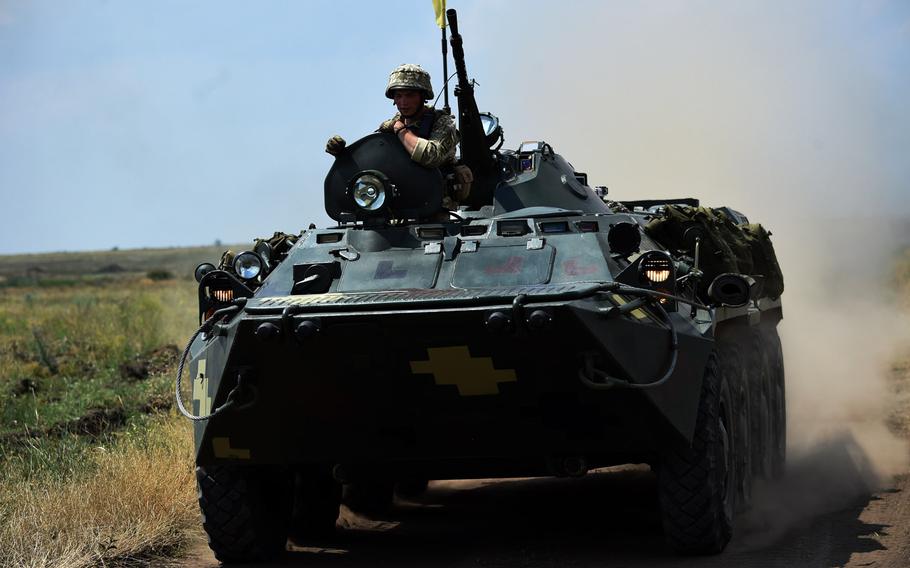 Buy Photo
U.S. Marines recently trained with Ukrainian troops near the Crimean Peninsula. Tensions in the region are on the rise as U.S. officials express concern over Russia stopping commercial ships from transiting freely to Ukrainian ports. (Martin Egnash/Stars and Stripes)

STUTTGART, Germany — Russia has delayed the transit of hundreds of commercial ships near a key Ukrainian port, a move that some analysts say amounts to a de facto blockade in an increasingly volatile region.

“Russia’s actions to impede maritime transit are further examples of its ongoing campaign to undermine and destabilize Ukraine, as well as its disregard for international norms,” State Department spokeswoman Heather Nauert said in a statement Thursday.

Moscow has been building up its Black Sea Fleet and overall military posture since seizing Ukraine’s Crimea Peninsula in 2014, a move condemned by the United States and much of the world.

“We continue to monitor the situation with merchant traffic in the Sea of Azov,” said Lt. Cmdr. Joe Hontz, a EUCOM spokesman. “We echo U.S. State Department’s comments on calling on Russia to cease its harassment of international shipping in the Sea of Azov and the Kerch Strait.”

The Kerch Strait connects major Ukrainian port cities such as Mariupol along the Sea of Azov to the Black Sea and ultimately the Mediterranean Sea.

“The Russian pressure tactics in the Sea of Azov can be described best as a quasi-blockade of a vital waterway,” said the Soufan Center, a New York security firm headed by former FBI special agent Ali Soufan, in a written analysis.

While blockades are regarded as an act of war, Russia’s maneuvers technically stop short of a full-scale blockade because a 2003 agreement between Kiev and Moscow allows naval boardings, the Soufan Center said.

“Because of the 2003 agreement, Russia has been quite open in its pressure against Ukraine,” according to the Soufan Center analysis. “There is little practically and legally that Ukraine can do.”

Besides adding anti-aircraft and anti-ship weapons systems in Crimea, Russia also recently opened a new bridge that connects Crimea to the Russian mainland. The bridge, which spans the Kerch Strait, has been condemned by the West and Ukraine as illegal.

“I think the Black Sea is more strategically important to the Russians than even the Baltic Sea,” retired Lt. Gen. Ben Hodges, former U.S. Army Europe commander, told Stars and Stripes in July.

Securing NATO’s eastern flank in the Baltics and Poland has been the primary focus of the United States and the alliance during the past few years. Hodges said NATO should try to further bolster its presence in the Black Sea region and consider developing a flotilla to operate there.

There has been talk among NATO members of setting up a Black Sea naval flotilla. Romania has expressed interest in a permanent multinational flotilla, but other countries, such as Bulgaria and Turkey, are wary of the idea.