US-led coalition fight against ISIS in Syria, Iraq 'far from over' 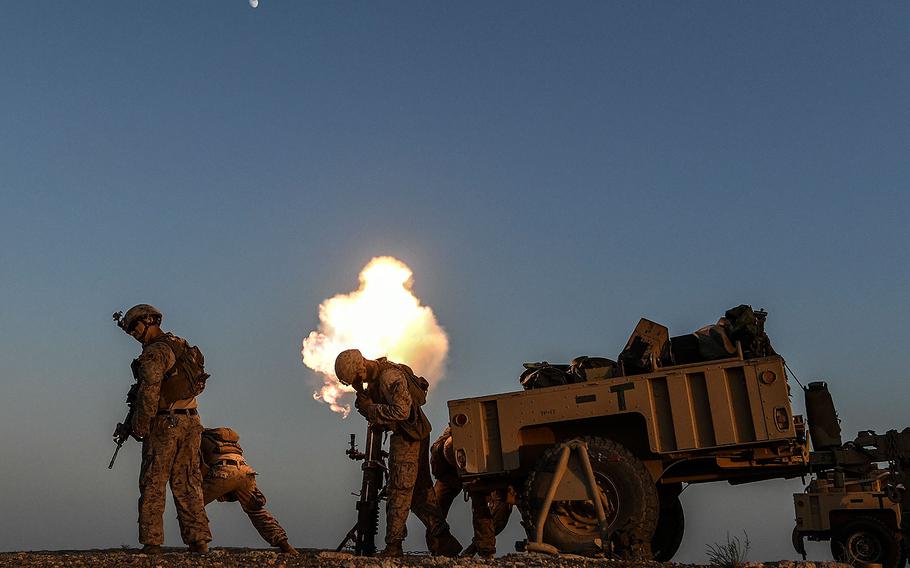 WASHINGTON — The Islamic State problem in Iraq and Syria is “far from over” and U.S. and coalition forces are not letting up on efforts to neutralize ISIS fighters from cities where they still have strongholds, military officials said Tuesday.

“There is still a lot of work to be done both militarily and on civilian stabilization efforts in both countries,” said Col. Sean Ryan, a spokesman for Operation Inherent Resolve, the U.S.-led coalition fight against ISIS. “Make no mistake — the coalition is not talking victory or taking our foot off the gas in working with our partners.”

Ryan said that partner forces are working to stabilize areas in Iraq and Syria where ISIS has been driven out, including rebuilding detention centers and training new guards. In some areas like Manbij in northern Syria, electricity is being restored and some children are going to school for the first time in five years, he said.

In other areas, the fighting continues. In eastern Syria, the coalition-backed Syrian Democratic Forces are preparing for an assault on the ISIS stronghold of Hajin, a Euphrates River Valley town.

There, he said, the SDF has set up checkpoints to vet fleeing civilians and weed out ISIS fighters trying to escape. Some have been captured, he said.

Coalition forces were “pretty confident they’ve confirmed they are indeed the enemy,” Gedney said. He said that the hundreds of civilians fleeing in anticipation of the fighting was a “relatively small” number relative to those remaining, and coalition forces believe ISIS is holding civilians there.

Gedney also said that there are over 1,000 ISIS fighters in the Middle Euphrates River Valley, where this next phase of operations is targeting. Some of those fighters are moving across the border from Iraq “through historic smuggling routes,” he said.

He would not confirm a U.N. report that there are still between 25,000 and 35,000 ISIS fighters in Iraq and Syria. Asked how many foreign fighters are coming into Syria or Iraq, Gedney said that those numbers are now diminished and that there was less movement of foreign fighters because it has become more difficult for them to blend into the local population.

Gedney said that there are about 600 “foreign terrorist fighters” being held in detention centers in Syria and the coalition has been working to ensure that the SDF has the “detention capability” to hold them. He would not say how many of them are American or British.

In the northern Syrian town of Manbij – a friction point in U.S.-Turkey relations – U.S. and Turkish forces are conducting independent, coordinated patrols along the border. Gedney said those are “very successful” and “have become routine now.”

He said training would soon commence for joint patrolling.

Even as commanders stressed advances against ISIS, they noted that the gains were tenuous. The coalition, Ryan said, has a long way yet to go.

“We cannot emphasize enough the threat of losing the gains we have made is real, especially if we are not able to give people a viable alternative to ISIS,” he said.