US, Japan searching for American sailor missing from destroyer in South China Sea 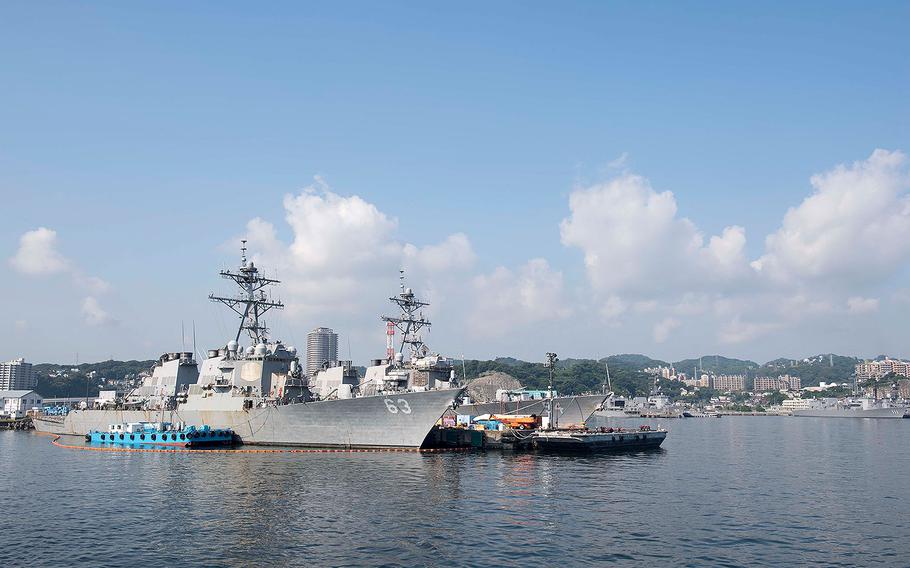 WASHINGTON — A member of the Navy was reported missing early Tuesday from an American warship in the South China Sea, launching a joint U.S.-Japanese effort to recover the sailor, the service said.

The missing sailor was reported overboard from the guided-missile destroyer USS Stethem about 9 a.m. local time Tuesday, according to a statement from the Navy’s Pacific Fleet. The sailor had not been located as of Wednesday afternoon, according to the Navy.

When the sailor’s absence was discovered, the Stethem was conducting routine operations in the South China Sea, where competing claims on islands by China and other nations contribute to tensions.

U.S. and Japanese ships and aircraft were conducting searches for the missing sailor through Wednesday, the Navy said. The Stethem, the USNS Amelia Earhart and the USNS Vice Admiral K. R. Wheeler were searching for the sailor alongside the JS Izumo and JS Sazanami, ships of the Japanese Maritime Self Defense Force.

A Navy P-3 Orion maritime surveillance plane and helicopters from the Izumo were searching from the air, according to the Navy. The U.S. Joint Personnel Recover Center from Hawaii was also assisting in the search, the service said.

The Navy withheld the name of the missing sailor while the search was ongoing. The Pacific Fleet statement said multiple thorough searches of the Stethem were conducted ahead of the search-and-rescue operations.

Earlier this year, American and Japanese ships spent more than 50 hours searching for a presumed overboard sailor missing from the guided-missile cruiser USS Shiloh off the coast of Okinawa, Japan, only to later discover Petty Officer 3rd Class Peter Mims had been hiding aboard the ship.

Mims earlier this month admitted he had actively avoided searches between June 8 and June 15, when he was found. He was charged with abandoning watch and dereliction of duty and received administrative punishment for his action. The Navy has declined to publicly disclose Mims’ punishment. The maximum would include loss of pay and six months confinement, but the Navy has said it would pursue additional administrative procedures against Mims, which could include a bad conduct discharge.

The Stethem, based in Yokosuka, Japan, has been operating throughout the Pacific for much of 2017. On July 12, it conducted a “freedom-of-navigation operation,” challenging Chinese control of Triton Island in the Paracel Islands of the South China Sea, U.S. officials said. The destroyer sailed within 12 nautical miles of the island, also claimed by Taiwan and Vietnam, to show the United States does not recognize it as anyone’s sovereign territory.