US, allies warn Russia that missile defenses will be bolstered to counter new threat 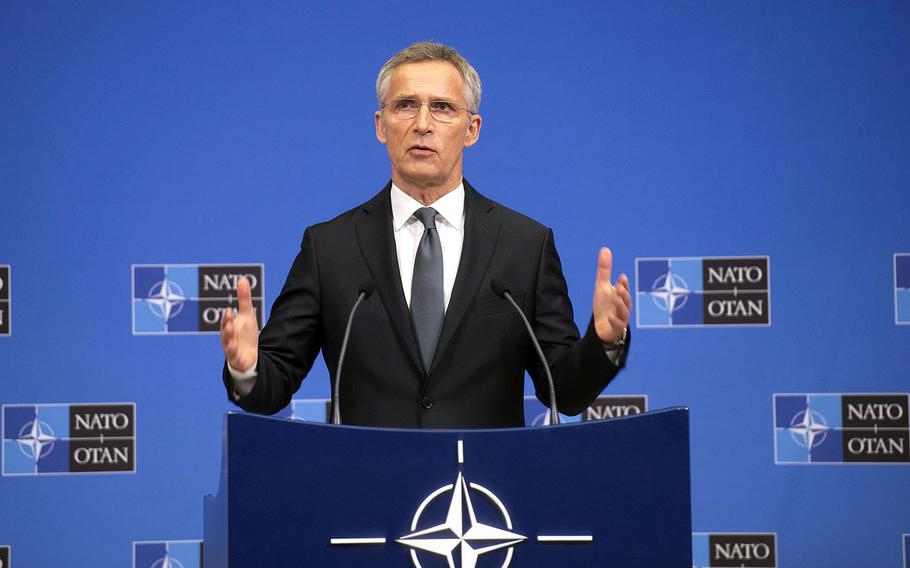 NATO Secretary-General Jens Stoltenberg answers questions at a news conference at the organization's headquarters in Brussels on Tuesday, June 25, 2019, ahead of a meeting of NATO defense ministers. (Courtesy of NATO)

The U.S.-led NATO alliance will consider bolstering its air and missile defense systems in Europe as well as enhancing its conventional forces if Russia doesn’t abolish a new missile system that poses a threat to the Continent, the alliance’s top official said Wednesday.

“An arms control agreement doesn’t work if it is only respected by one side,” NATO Secretary-General Jens Stoltenberg said Wednesday. “This is extremely serious.”

Stoltenberg’s comments came at the start of a meeting of NATO defense ministers, including acting Defense Secretary Mark Esper, who is in Brussels to convene with allies.

Last year, the United States warned it would pull out of the Cold War-era pact by August unless Moscow comes back into compliance with the treaty that bans missiles with a range between 310 and 3,400 miles. The United States and its allies in NATO contend Russia’s SSC-8 missile system violates the weapons ban and poses a new threat. The weapon is nuclear capable, has short warning times and could hit European capitals within minutes, Stoltenberg said.

Moscow has denied the system violates the treaty and has warned it will take counter measures in light of the U.S. decision to withdraw from the ban.

Another underlying U.S. concern regarding the INF treaty is it applies only to the United States and Russia, but China’s military emergence has sparked worries that Beijing is free to develop systems that the United States is banned from developing. In January, China tested an intermediate-range missile dubbed “the Guam killer,” which purportedly has enough range to strike U.S. bases in the Pacific.

But in Europe, some analysts have warned the collapse of the treaty could affect the military balance and usher in a dangerous new era of nuclear brinkmanship. Allies have downplayed such concerns, saying NATO has no plan to deploy new ground based, nuclear capable, missiles in Europe.

“If they don’t come back into compliance, we need to respond. So we also need to prepare for a world without the INF Treaty,” Stoltenberg said at the start of talks at NATO’s Brussels headquarters.

Stoltenberg did not detail how NATO would adapt its missile defenses in Europe, but one option could be to modify and enhance its existing networks to counter the new Russian threat.

Reconfiguring the alliance’s missile defense system also is likely to ratchet up tensions with Moscow. For years, Russia has complained about the NATO ballistic missile defense system, which allies say is designed to counter threats emanating from countries such as Iran. But Moscow has always been suspicions of the system and feared it was an attempt to blunt Russia’s own nuclear deterrent capabilities.

Over the years, allies have attempted to defuse Russian concerns about the system’s limitations — namely that its interceptors are too few and located too far south or too close to Russia to be able to intercept Russian intercontinental ballistic missiles.

NATO’s missile defense set up, however, could be enhanced, if allies agree.

U.S. military capabilities in Europe are the core of NATO’s missile defense system. It includes a U.S. Army-manned radar positioned on a mountain top in Turkey, a U.S. Aegis site at Deveselu Air Base in Romania, another U.S. site in Poland and four Aegis destroyers based out of Rota, Spain.

Next week, NATO will hold a meeting with Russian officials with the talks likely to center on how to salvage the INF treaty.

“They still have the chance to save the treaty,” Stoltenberg said. “Time is running out, but it is still possible for Russia.”