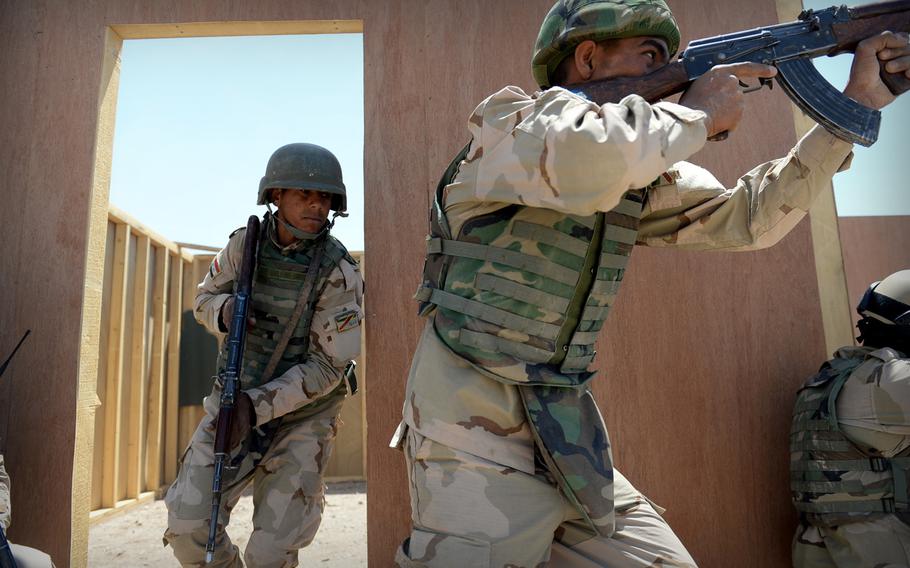 Iraqi army soldiers practice clearing a building during an exercise at Besmaya, a coalition training site south of Baghdad, on April 26, 2015. Coalition advisers say they try to make the exercises as realistic as possible to reflect the threats the Iraqi troops will face in their fight against Islamic State militants. (Josh Smith/Stars and Stripes)

Iraqi army soldiers practice clearing a building during an exercise at Besmaya, a coalition training site south of Baghdad, on April 26, 2015. Coalition advisers say they try to make the exercises as realistic as possible to reflect the threats the Iraqi troops will face in their fight against Islamic State militants. (Josh Smith/Stars and Stripes) An Iraqi soldier runs across the desert during an exercise at Besmaya, a coalition training site south of Baghdad, on April 26, 2015. The course is designed to give Iraqi soldiers a taste of what they may face when they are deployed to the battlefield. (Josh Smith/Stars and Stripes) Iraqi soldiers run through smoke grenades to take up positions during an exercise at Besmaya, a coalition training site south of Baghdad, on April 26, 2015. (Josh Smith/Stars and Stripes) Sgt. Cory Bazemore, a U.S Army adviser in Besmaya, Iraq, instructs an Iraqi army mortar team during an exercise on April 26, 2015. Iraqis come to the coalition-led training with a variety of levels of experience, with some needing more hands on instruction. (Josh Smith/Stars and Stripes) A U.S. soldier, left, and an Iraqi officer use a diorama to plan an exercise for Iraqi troops at the Besmaya training center south of Baghdad. (Josh Smith/Stars and Stripes) 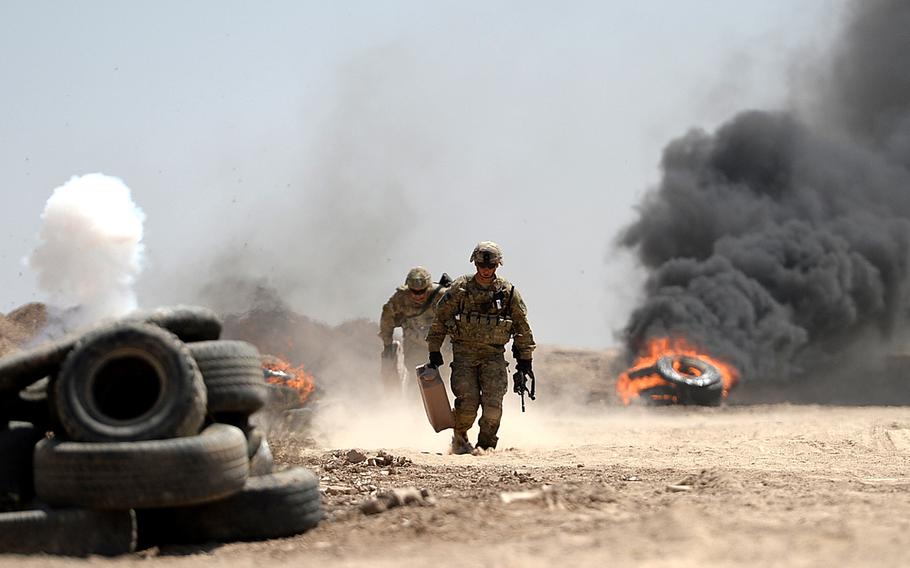 U.S. Army advisers run to safety after lighting tires for realistic effects during an Iraqi army exercise at Besmaya, a coalition training site south of Baghdad on April 26, 2015. (Josh Smith/Stars and Stripes) 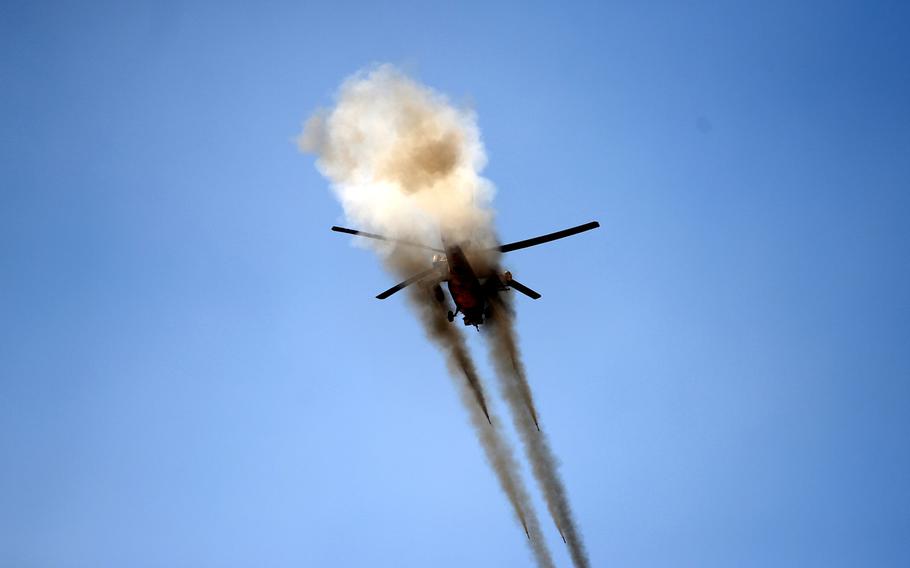 An Iraqi air force Mi-28 attack helicopter fires rockets at a target during a training exercise at Besmaya, a coalition site south of Baghdad, on April 26, 2015. The large exercise included air attacks and mounted operations with tanks and armored vehicles. (Josh Smith/Stars and Stripes) 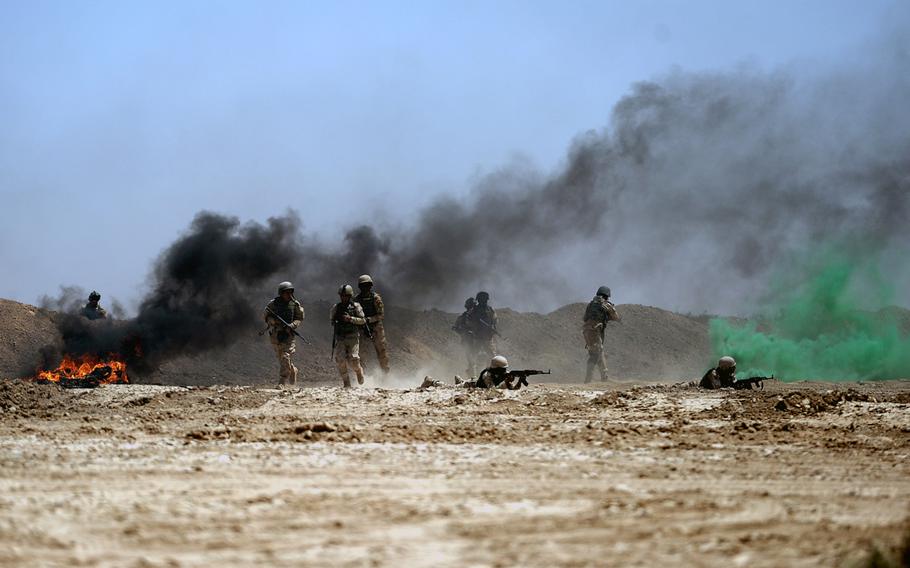 Iraqi army soldiers run through smoke to take up positions during simulated combat at a training exercise on April 26, 2015. Coalition advisers say they try to inject realism into the training as much as possible. (Josh Smith/Stars and Stripes) 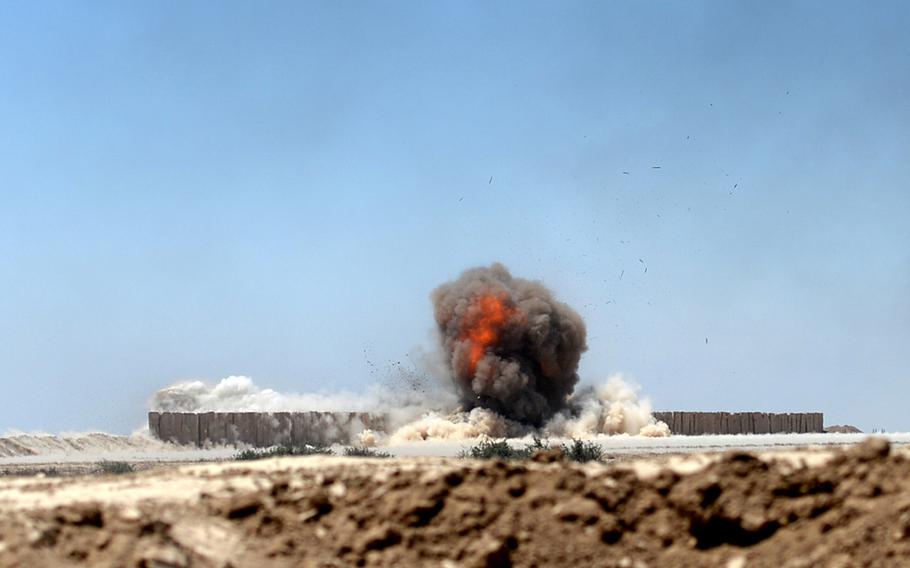 Iraqi army engineers use explosives to blow a hole in concrete blast walls during an exercise at a training range south of Baghdad. The walls are designed to simulate defense used by Islamic State militants around cities like Mosul. (Josh Smith/Stars and Stripes) Iraqi troops run through a smoke grenade to assault a building during an exercise at a Besmaya, a training camp south of Baghdad, on April 26, 2015. (Josh Smith/Stars and Stripes) An Iraqi army soldier fires his rifle during a training exercise south of Baghdad designed to build troops? confidence and educate them on threats they may face. (Josh Smith/Stars and Stripes)

BESMAYA, Iraq — With live explosives, smoke and rocket fire from helicopter gunships, American troops and their international partners are trying to give Iraqi soldiers a realistic idea of what they can expect when they take on Islamic State militants.

Analysts say a variety of factors, from sectarian divisions to corrupt leadership practices, led to the collapse of the Iraqi army last year when Islamic State fighters swept across large parts of northern and western Iraq.

The disintegration of Iraq’s army was all the more striking because the U.S. had spent $25 billion rebuilding, training and equipping it after the Americans disbanded Saddam Hussein’s military in the wake of the 2003 U.S.-led invasion.

That has raised questions whether the U.S. can do a better job this time.

In the wake of last summer’s rout, American and other international trainers working with rank-and-file soldiers say their focus is squarely on boosting Iraqi confidence. Key to that confidence are realistic exercises such as the ones conducted at a combat training center at Besmaya, south of Baghdad.

In one particularly elaborate exercise conducted recently, coalition advisers constructed a faux battlefield designed specifically to mirror Islamic State group fortifications around cities such as Mosul in the north, the group’s de facto capital in Iraq.

“That whole scenario is crucial to their success,” said Maj. J.D. Pritchett, an operations officer with the 82nd Airborne Division. “We built a training lane much like what they’re going to face. You don’t want the first time you’re encountering something to be right there on the battlefield. What the training does more than anything is give them confidence to go through those barriers, break down those walls and keep pushing.”

During the course of the recent exercise, Iraqi troops used explosives to blow holes in earthen berms and concrete blast walls, cleared bunkers and buildings and practiced working in and around heavy armored vehicles.

While many of the Iraqi troops appeared to perform relatively seamlessly together, the realistic training clearly brought out stress in some of the soldiers.

Amid automatic rifle fire and drifting smoke, confusion reigned among one mortar team’s members as they crouched on the talcum-white desert.

U.S. Army Sgt. Cory Bazemore stood over them, gesturing and barking instructions in English, punctuated by a few Arabic words.

At one point, the Iraqi soldier unloading mortar rounds from a crate looked around desperately with questioning eyes, his fingers on a pin at the tip of the warhead, unable to decide whether to pull it. Other team members struggled to aim the tube. His attention pulled in multiple directions by the confused soldiers, Bazemore eventually set them straight and the crew got off one round before the training ended.

As Iraqi troops try to take back their country from Islamic State militants, advisers with the international training mission are trying to tamp down exactly that kind of panic while building confidence among the Iraqi forces.

“I think they were just rattled by all the firing and the stress of the moment,” Bazemore said of the Iraqi mortar team-in-training. “All we can do is help them the best we can and then hopefully they go on to more training” conducted by the Iraqis.

More than 6,500 Iraqi and Kurdish security forces have been trained by the U.S.-led coalition at four different “Building Partner Capacity sites” around Iraq. The coalition has about 1,000 advisers from various countries in Iraq. At Besmaya, for example, a contingent of Spanish soldiers is among those working alongside the Americans.

As of mid-April, nearly 5,000 Iraqi security forces were being trained at the various camps, according to the White House.

“We incorporate pretty much every obstacle that we’ve identified into the training so that it’s not a surprise and not a new picture,” said Sgt. 1st Class Frank Batts, a combat engineer. “We try to teach them how to identify key threats and how to approach them because they’re going to be facing a lot of obstacles.”

The advisers say the Iraqis have varying levels of experience and ability, with some veterans mixed in among raw recruits. In all cases, the coalition courses are meant to be part of much more training conducted by the Iraqis themselves.

The trainers who work daily with the Iraqis say they try not to preach, instead focusing on ways to improve Iraqi tactics and practices.

“When we showed up, they had their own ways of doing things so we just stepped back, told them about the way we do things, then tried to work together to find the best combination in a way that works for them,” said Sgt. Cody Sorrell, who works with an Iraqi platoon.

“Our country is depending on us, so I will take my education from wherever I can get it,” he said.

Thousands of U.S. advisers and instructors were involved in the previous seven-year effort to train the 400,000-strong Iraqi army, only to see the Iraqi forces fall apart in the face of the Islamic State group’s onslaught last year.

But the American soldiers on the ground today say they don’t let doubts creep in.

“I haven’t really thought about it,” Batts said. “If I have any doubts, [the Iraqis] will see that. The more positive I am, the more motivated they will be.”

Second Lt. Rebecca Tummers, an intelligence officer based at Besmaya, said doubts are understandable. “I think anybody who teaches wonders if what they’re teaching is getting across. I think that is an issue for any kind of teacher or mentor or adviser,” she said. But, she added, being able to see progress among the troops during the training alleviates those doubts.

Where progress hasn’t been measured is on the battlefield itself, Tummers said. Advisers have little access to any information on whether Iraqi troops are performing better after taking the coalition courses.

“At this point it’s very difficult to get assessments from the field,” she said. “But I think in the future we’ll get a better idea.”

Pritchett, who has deployed eight times since 2001 to both Iraq and Afghanistan, said he considers this mission one of the most rewarding as he’s developed relationships with the Iraqi troops.

“They understand what the goal is, and that’s a unified Iraq,” Pritchett said. “That’s all we’ve seen: guys willing to go get their country back.”