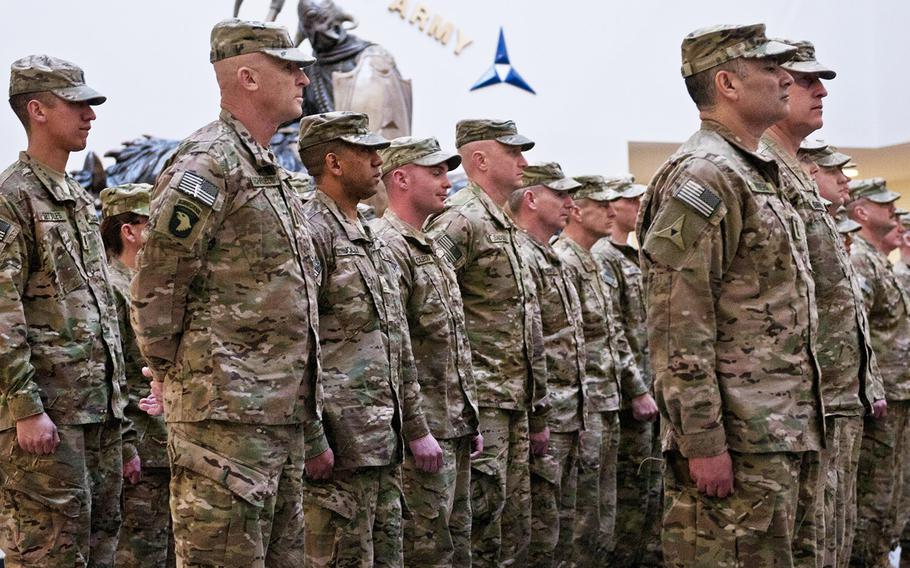 In a February, 2014 file photo, members of Headquarters and Headquarters Company, III Corps, wait to be released by III Corps and Fort Hood Commanding General Lt. Gen. Mark Milley, during their welcome home ceremony from a nine-month deployment to Afghanistan. (Ken Scar/U.S. Army)

AUSTIN, Texas – Army division and corps headquarters units will deploy in the fall, one to support operations in Iraq and the other in Afghanistan, service officials announced Friday.

III Corps Headquarters from Fort Hood, Texas will deploy to Iraq to replace XVIII Airborne Corps Headquarters as the headquarters of the Combined Joint Task Force-Operation Inherent Resolve as part of a regular rotation of forces, according to an Army news release.

This is the third rotation for III Corps at the helm of the U.S. fight against the Islamic State. About 250 soldiers will deploy for as long as a year, said Col. Myles Caggins, a III Corps spokesman.

“The III Corps has a distinguished history of combat success, and our soldiers have trained several months for this important mission,” Command Sgt. Maj. Daniel Hendrex of III Corps said in a statement.

Maj. Gen. Robert “Pat” White was announced May 23 for promotion to lieutenant general and as the commander of III Corps. He is expected to take command June 5.

About 250 servicemembers will deploy for at least nine months and as long as a year, said Lt. Col. Rosalba Poulos, a division spokeswoman.

This is the first time that the division headquarters will support this mission, “which is a NATO-led mission to train advise and assist our Afghan partners,” she said.