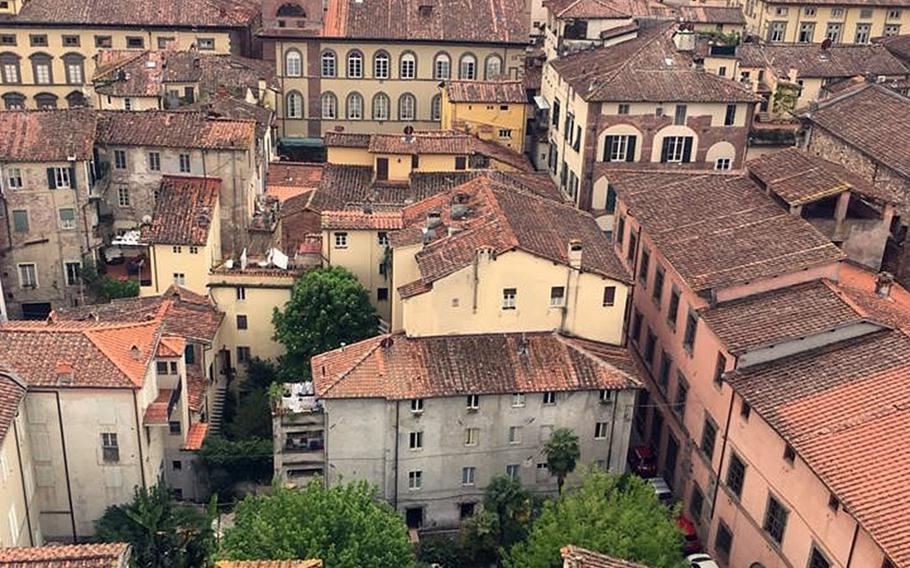 Buy Photo
Lucca, a walled city in a hilly part of Tuscany, is a great place to shop and stroll. A couple of towers in the city offer sweeping views. (John Vandiver/Stars and Stripes)

Buy Photo
Lucca, a walled city in a hilly part of Tuscany, is a great place to shop and stroll. A couple of towers in the city offer sweeping views. (John Vandiver/Stars and Stripes) 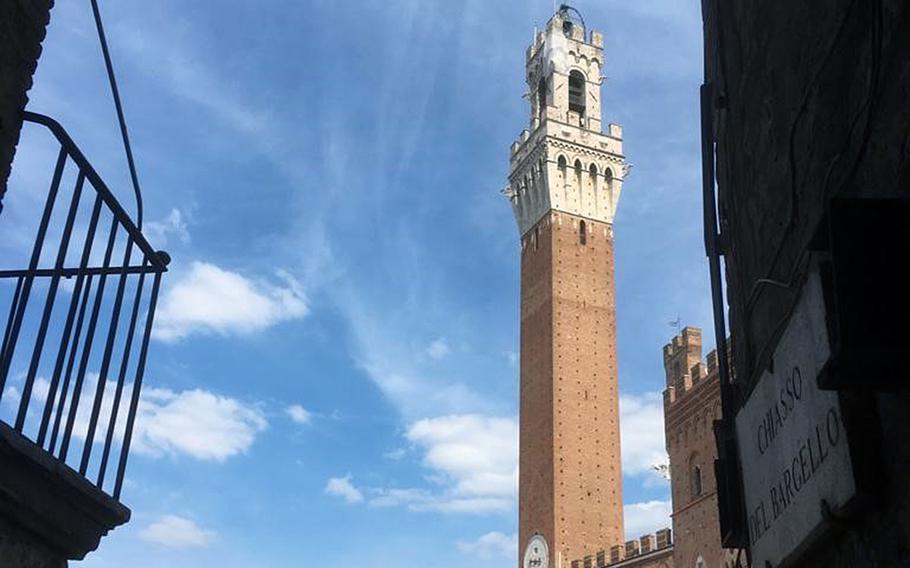 Buy Photo
There is lots to do in the medieval city of Siena, famous for its main square, Piazza del Campo, and the red town hall known as Palalzzo Pubblico where city business is still done. (John Vandiver/Stars and Stripes) 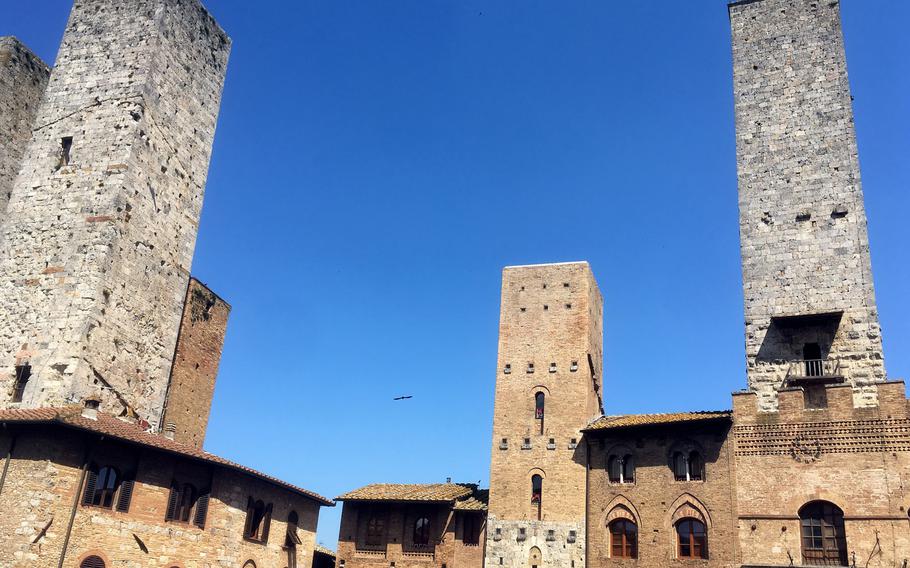 Buy Photo
San Gimignano is one of the more popular villages in Tuscany for visitors. It's famous for its towers, which date to the 12th century, as well as the local Vernaccia wine. (John Vandiver/Stars and Stripes) 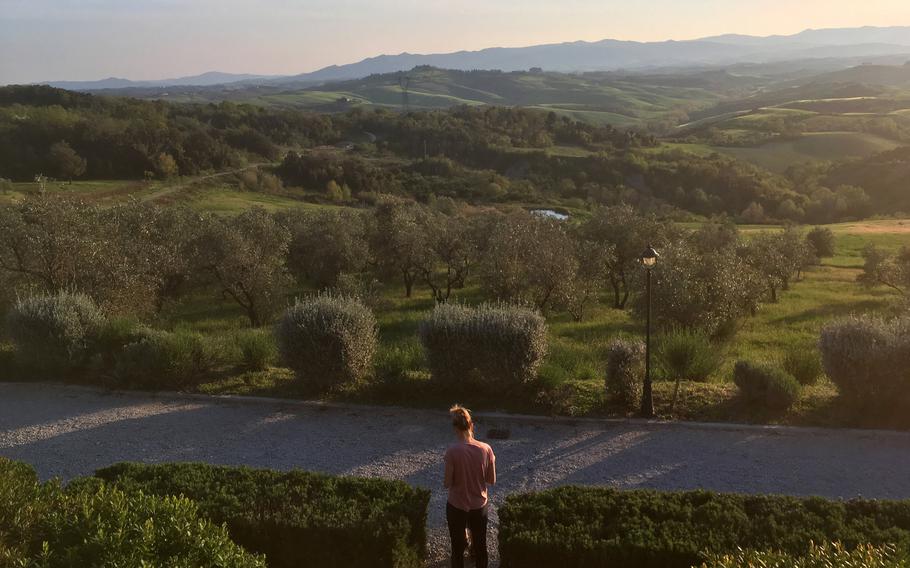 Buy Photo
While Tuscany is known for its food and historic cities like Florence, one of best things about the region is the chance to find accommodations in more isolated areas, like this room with a view on an olive farm in Iano. (John Vandiver/Stars and Stripes) 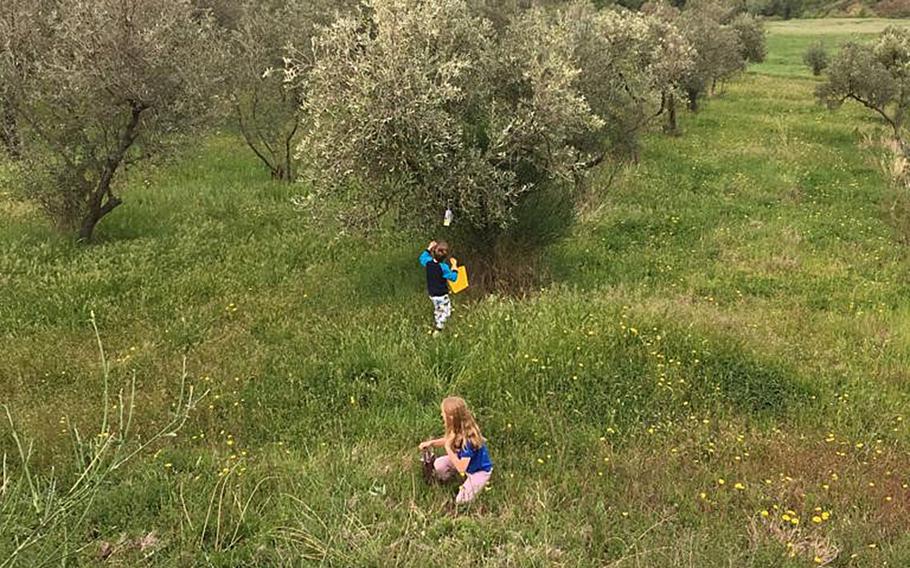 Buy Photo
In Tuscany, it's possible to stay in farmhouses in the countryside, like this olive tree plantation in Iano, where kids were hunting for eggs on Easter. (John Vandiver/Stars and Stripes)

The rolling hills topped with cypress trees are a Tuscan travel book cliche. So are the country manors and age-old villages that seem to sprout from nowhere on bumpy, romantic back roads.

Whatever it is — maybe it’s all the pecorino and wine — a road trip through central Italy is still hard to top even if it is unoriginal.

About a decade ago, we rambled through many of the villages on a childless Tuscan adventure, departing for home with delusions of giving it up to tend vines. But would it be the same with two young “are we there yet” kids in the backseat? For school spring break, we decided to find out, heading south from Stuttgart for a tiny olive tree farm where they make their own oil, about 40 miles south of Florence.

When traveling in Tuscany, the so-called “agriturismo” concept which offers accommodations on a working farm is the way to go rather than hotel jumping. The farms serve as a good home base, usually with your own kitchen.

The biggest challenge is deciding what region to explore. There is the seaside town of Livorno with nearby Pisa and Lucca, a beautiful walled city with scores of piazzas, cathedrals and interesting side streets. Farther south are places like Montepulciano and Montalcino, good destinations for serious wine people.

In Iano, we stayed at a place called Belmonte Vacanze, which had a classic Tuscan view of green hills in the distance and open space. The facility had a pool and horse riding for kids. Helicopter parenting impulses faded away here. Eager to explore some of the surrounding towns, the biggest challenge was getting the kids off the farm, where they were content to wander.

After some hectoring, we made a visit to the walled village of San Gimignano, a short drive from our farm. It is one of the most picturesque in Tuscany. Perched on a hill, the village got its name around 500 A.D., but the area was populated all the way back to the time of the Etruscans. It is best known for its 12th century towers built by wealthy families. Originally there were 72, but 14 still stand among the piazzas and well-preserved buildings. Side street shops with all kinds of meats and cheeses were the place to stock up for dinner back on the farm. The town also is famous for its Vernaccia wine, a crisp white that has been produced in the town for more than 700 years.

We made another day trip to the medieval city of Siena, famous for its Piazza del Campo, a big round area where visitors sprawl out on the ground to take in the view of the red town hall known as Palazzo Pubblico and its high tower.

The Campo also is where the city’s best-known event happens. The Palio, a horse race between rival sections of the city, is held each summer in July and August. Thousands pack into the square to view the spectacle.

Florence is the major attraction in the area, but we took a pass. Driving the chaotic streets on a visit years ago was miserable. And a visit during Easter season would mean mega pedestrian congestion.

While San Gimignano, Siena and Florence are on the Tuscan greatest hits tour, there are lots of lesser known but interesting villages off the beaten path that are fun to explore. We liked Volterra, which has all the Tuscan signature charm without the hordes. It also looks lived in, with real people going about their real lives. Peccioli, a minuscule place nearby, had a similar appeal.

A bit farther afield was Montetcatini Terme, a city about an hour and a half drive from our farm. The city’s old town can be accessed by cable car. It has all the Tuscan trimmings, but our main purpose was to visit a friend from Stuttgart who took a six-month sabbatical from work to test whether farm life was for him.

We visited the isolated estate on top of a twisting road that looked out to the city below. Our friend said he toiled all day, planting and pruning the acres. The grounds were stunning, but a few weeks into the job, he had doubts. The isolation on the hilltop wasn’t so splendid, our friend said.

The drive back to Iano wasn’t either. The GPS failed, overwhelmed by small-town roundabouts. Maps had to be pulled out and patience grew thin in the Tuscan night, which for the moment felt a little less romantic.

DIRECTIONS: The Florence area of Tuscany is about a three-hour drive for military personnel stationed at Vicenza and a short drive for those at Camp Darby near Livorno. The area is about a 10-hour drive from Stuttgart, Germany. Various routes are possible. If stopping along the way for an overnight break, Verona is a good place.

COSTS: Lodging costs vary greatly, but deals can be found, especially slightly off season, such as spring and early autumn. For farmhouse-style accommodations, www.agriturismo.it/en/ is the place to look.

FOOD: Whether it’s a larger city or small village, Tuscany is a culinary wonderland with various towns putting their own twist on pasta dishes, salamis and cheeses.