Trump signs off on Global War on Terror memorial 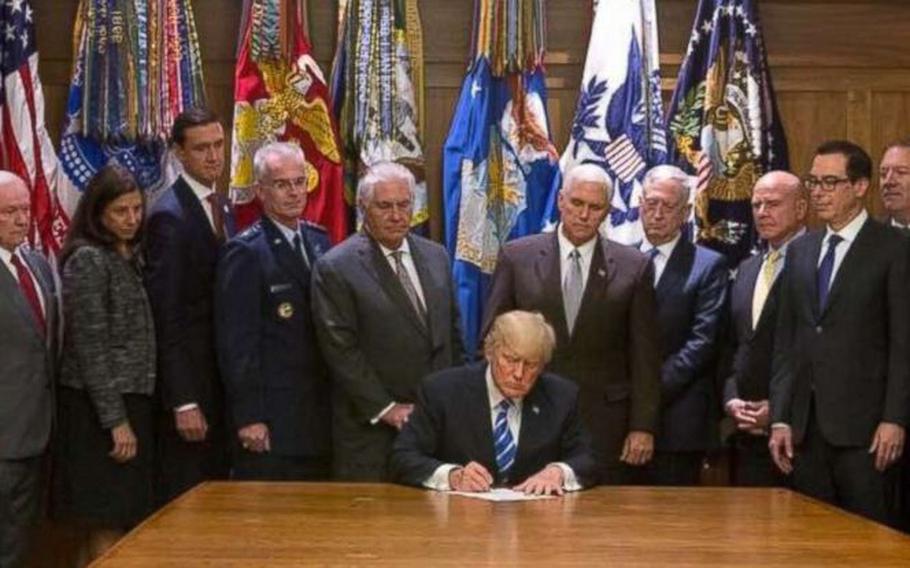 WASHINGTON — More than 15 years into the Global War on Terrorism, the U.S. president signed a bill approving the construction of a national memorial honoring those who have fought and died in Iraq and Afghanistan since 2001 – and those doing so today.

President Donald Trump signed the bill at Camp David, Md., on Friday, where he held weekend meetings with national security leadership to discuss the latest strategy in Afghanistan. He was flanked by his National Security team, and White House Chief of Staff Marine Gen. John Kelly, who commanded troops in Iraq and lost a son in Afghanistan.

With the fighting still going on, the legislation to create the memorial required an exception from the 1986 Commemorative Works Act requiring Congress to wait 10 years after the official end of a military conflict before considering a memorial in the nation’s capital. A similar bill proposed last year did not go through.

The law authorizes the Global War on Terrorism Memorial Foundation to oversee the fundraising, design and construction of the memorial.

“Today’s historic signing is dedicated to our 3 million brothers and sisters who have deployed in the Global War on Terror, especially to the ones we have lost, and those who face great obstacles since their return home,” Andrew Brennan, founder and executive director of the foundation, said in a statement. “We’re looking forward to building a sacred place of healing and remembrance for our veterans and their families and want to thank our partners and advocated who worked tirelessly on Capitol Hill to pass this bipartisan legislation.”

Since Sept. 11, 2001, more than 2.5 million Americans are estimated to have deployed in support of the wars in Iraq and Afghanistan and the Department of Defense says nearly 7,000 have been killed and 52,000 have been wounded. About 20 percent of veterans returning from those conflicts struggle with post-traumatic stress, according to the release.

The foundation hopes to raise $40 to $50 million for the privately funded memorial. It plans to seek federal approval to build it on the National Mall and to hold a national competition for its design.

The project is expected to be completed in 2024 – 10 years after Brennan, a former Army Captain who flew Black Hawks in the Afghanistan war, conceived of the project. It will go through a detailed 24-step bureaucratic process, including fund-raising, site selection and design through construction.