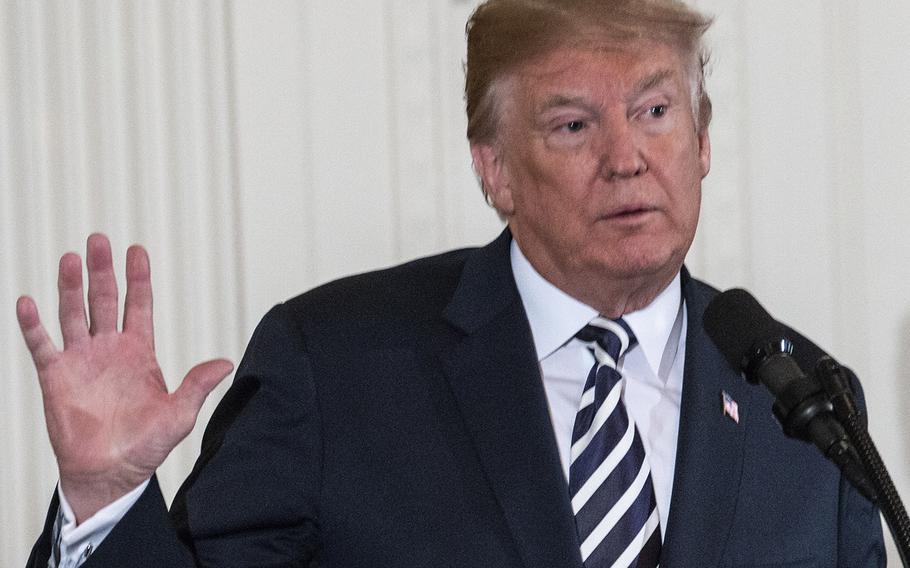 WASHINGTON – President Donald Trump will address 10,000 veterans by phone next week about a new law that aims to expand veterans’ access to private-sector doctors.

Trump and Department of Veterans Affairs Secretary Robert Wilkie are inviting veterans to join a 15-minute conference call at 11:45 a.m. Eastern time Tuesday. A description of the call said it would focus on the passage of the VA Mission Act last year “and the milestones accomplished during this time.”

Details about Tuesday’s call were shared with veterans organizations Thursday, then posted on the VA website Friday along with instructions to register. To listen, veterans can register at www.att-rsvp.com using conference number 469230.

Joe Chenelly, director of the national veterans organization AMVETS, said 5,000 AMVETS members had signed up for the call as of Friday afternoon.

“Our members are excited to be able to hear directly from the president on the Mission Act,” Chenelly said.

The VA launched the Mission Act earlier this month to the chagrin of leaders from several veterans groups who said they were kept in the dark about implementation plans and believe the process was rushed.

The new law increases the number of veterans who are eligible to receive private-sector health care from 8% to 40% of the VA’s 9.5 million patients, agency officials estimated. Though more veterans are eligible, VA leaders believe the number of patients who opt for outside care will go relatively unchanged.

Trump has promised since his 2016 presidential campaign to give veterans more health care choices.

He officially announced his 2020 campaign with a rally in Orlando, Fla., on Tuesday night, during which he declared that promise fulfilled.

“We passed VA choice,” Trump told the crowd. “You go out now, you get a doctor, you fix yourself up, the doctor sends us the bill, we pay for it.”

In reality, veterans enrolled in the VA must talk with their VA doctors in order to gain access to private-sector medical care. Their doctors are supposed to use a new “decision support tool” to help determine whether veterans can go outside the VA.

Regulations say veterans can choose private doctors when they must drive more than 30 minutes to reach their VA mental health or primary care providers or must wait longer than 20 days for an appointment. Other factors can be taken into consideration, such as the availability and quality of services at VA facilities and whether outside care is determined to be in veterans’ best medical interest.

The new law does allow veterans to visit urgent care and walk-in clinics without prior authorization from the VA. To be eligible, veterans must be enrolled as VA patients, and the clinic must be in the VA’s network.

The Mission Act replaces an existing Veterans Choice Program created by Congress in 2014 in response to a VA scandal involving unacceptable wait times for patients.