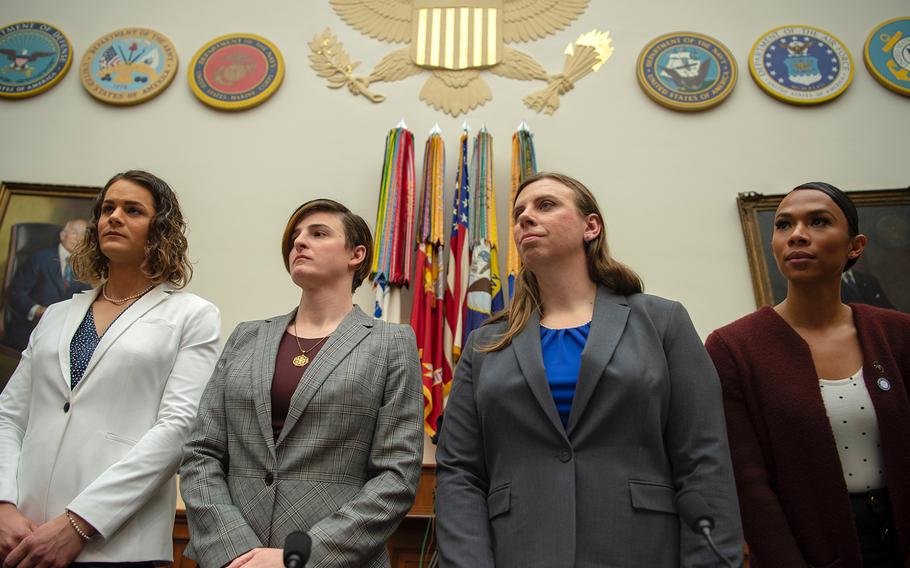 WASHINGTON — President Donald Trump’s ban on transgender people serving in the military went into effect Friday, nearly two years after he surprised top Pentagon leaders with a series of tweets announcing he would not allow transgender men and women to serve “in any capacity.”

The Pentagon will no longer allow the vast majority of men and women who have been diagnosed with gender dysphoria, the medical condition associated with individuals who do not identify with their birth sex, to enlist in the military. The new policy comes as Trump’s administration faces at least four lawsuits seeking to halt the orders that overturned the Pentagon’s 2016 decision to end its longstanding ban on open military service by transgender people.

The Pentagon on Friday defended its decision. Tony Kurta, who is performing the duties of the deputy undersecretary of defense for personnel and readiness, told reporters that the decision was rooted in a study launched by former Defense Secretary Jim Mattis after top military leaders raised questions about transgender military troops’ service.

Kurta was pressed Friday for details about information from the study used to make the determination to alter the policy. He declined to provide any data supporting the policy, citing the ongoing litigation and denying the policy was being implemented because of Trump’s surprise July 2017 tweets. The data collected in the Mattis study has not been made public to date.

Some critics have responded by calling the new policy discriminative and vowed to continue fighting it. Aaron Belkin, the director of the Palm Center, a research institutes that studies LGBTQ inclusion in the military, called the policy “Don’t’ Ask, Don’t Tell” for transgender troops, referring to the former President Bill Clinton-era policy that banned gay servicemembers from serving openly. That policy was overturned by former President Barack Obama in 2011.

“Today our nation lurches backwards in a disgraceful retreat from the arc of our civil rights history,” Belkin said in a statement released Friday. “Our hearts break for the courageous transgender patriots who want nothing more than to defend their country, and we pledge not to rest until inclusive policy is restored.”

He vowed the “transgender ban won’t stand for long.”

The Policy Pentagon officials have routinely denied the policy — dubbed “the Mattis plan” — constitutes a blanket ban on transgender individuals serving in the military.

The new policy bars from military service most people who have been diagnosed with gender dysphoria – described by the American Psychiatric Association as “a conflict between a person’s physical or assigned gender and the gender with which he/she/they identify.” It does allow people to enlist with a diagnosis of gender dysphoria who have doctor certification they have remained stable in their biological sex for 36 months. People who have medically transitioned their sex are disqualified from service.

A Supreme Court ruling in January paved the way for the Pentagon to implement its transgender policy, when the court decided injunctions on the policy levied by federal judges overseeing the lawsuits should be removed.

In a March 12 directive, the Pentagon gave servicemembers with gender dysphoria one month to be diagnosed by a military doctor in order to stay in the service under the old policy.

Transgender servicemembers who are serving or had a contract to ship to entrance training before Friday can stay in the military under the old policy, which allows them to serve openly in their preferred gender and to receive medical treatment to transition throughout the remainder of their careers. The policy does not bar them from re-enlistment, Kurta said.

It remains unclear precisely how many servicemembers on active duty identify as transgender. A 2016 Defense Department survey, which was anonymous, found about 9,000 servicemembers identified themselves as transgender men or women, Kurta said. Some 1,400 troops have been diagnosed with gender dysphoria since the 2016 policy was implemented, he said. Less than 10 active-duty servicemembers have undergone gender reassignment surgery in that time, Kurta said.

If a servicemember must undergo gender transition to treat their gender dysphoria, and they cannot or will not meet the standards associated with their biological sex, Kurta said, they will be referred to the disability evaluation system.

The policy will be reviewed in two years, he said.

“The department with continue to treat all individuals with dignity and respect and every servicemember is able to express their gender identity. DoD will take no actions solely based on gender identity,” Kurta said.

Reactions Some medical and LGBTQ advocacy groups voiced outrage about the implementation of the military policy, as did some former Pentagon leaders under the Obama Administration.

Former Navy Secretary Ray Mabus marked the policy’s implementation in a tweet, saying the “Discriminatory & intolerant #TransMilitaryBan goes into effect today. The American principle has always been [about] what you can do, not who you are. Implementing this policy erodes our democracy & seriously weakens our military. Proud to #SupportTransTroops.”

The president of the American Medical Association, Dr. Barbara McAneny, said in a statement that “there is no medical reason — including a diagnosis of gender dysphoria — to exclude transgender individuals from military service.”

She added transgender health care, including treatment for gender dysphoria, is effective.

The American Military Partner Association, an organization for LGBTQ military families, said the implementation of the directive is “dragging us backward into the dark days of ‘Don’t Ask, Don’t Tell.’”

“Thousands of transgender servicemembers and qualified recruits are willing to risk their very lives for our nation, and we will not stop fighting to reverse this unconscionable ban until they are once again able to serve openly and authentically as they deserve,” the statement read.

Attorneys for the GLBTQ Legal Advocates & Defenders and the National Center for Lesbian Rights called the policy “discriminatory” in a joint statement.

“The administration is deliberately misleading the American public and the courts by saying that because transgender people who suppress or hide their transgender status can serve, the policy is not a ban,” Jennifer Levi, GLAD Transgender Rights Project Director, said in the statement. “But there is no doubt: just as Don’t Ask Don’t Tell was a ban on gay and lesbian servicemembers, this is a ban on transgender troops.”