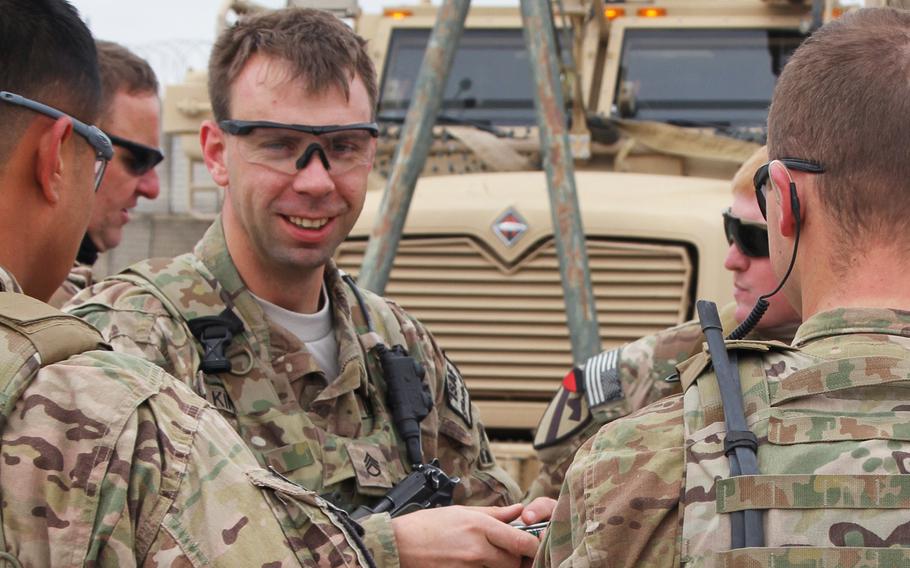 WASHINGTON — The Pentagon move toward open service for transgender troops raised new questions Tuesday about the last wall for gender equality in the military: combat jobs.

Will a soldier who was born female but now lives as a man be permitted to hold one of more than 200,000 armor, infantry, artillery and special operations positions that still prohibit women?

That’s more than semantics to Staff Sgt. Patricia King, an Army infantry soldier at Fort Carson, Colo., who told her command she is transgender in March. For now, she’s still serving in the infantry, a job she’s done for 16 years over three deployments to Afghanistan.

“The only difference between now and (before) is that I serve openly now, so I would like the opportunity to continue doing my job,” she said. “Anyone who’s capable of the job should have the opportunity.”

Defense Secretary Ash Carter has created a working group to sort out the issues of integrating transgender troops by January. It creates a new twist for the services as they grapple with gender roles and approach a deadline this year for a decision on whether to allow women into combat roles deemed too physically demanding.

Many transgender servicemembers who live as men and take testosterone treatments — but were born female — could likely pass the physical requirements of the toughest combat jobs, said Stephen Forssell, founding director of the graduate program in LGBT Health Policy and Practice at George Washington University.

“When transgender individuals engage in the hormone therapy, that represents a very powerful modification of an individual’s body,” Forssell said. “The physical attributes as of being able to serve in the rigors of battle, if they are on T (testosterone), it is almost a moot point.”

About 15,500 transgender individuals are estimated to be serving in the military, including some in combat roles, but they are forced to hide their identities or face being kicked out.

The military ban was based on old, discredited medical beliefs that transgender people suffered from an identity disorder. Carter called it an “outdated, confusing, inconsistent” policy.

But allowing transgender troops to serve openly in combat billets raises issues over the fairness and reasoning behind prohibitions on women in those same military occupational specialties, Forssell said.

In 2013, the Pentagon began a three-year effort to integrate women into 300,000 combat positions and has since opened tens of thousands of those. But the vast majority are still closed.

“That would seem to be a contradiction. … It calls into question of why [women] aren’t serving in the first place,” he said.

The services must now decide whether to ask for waivers this fall to keep positions male-only or issue plans to integrate by January.

Whatever the outcome, the military should treat transgender troops according to the gender they live under, said Aaron Belkin, director of the Palm Center, an independent research institute that has studied the issue.

Some servicemembers would still be excluded under any remaining prohibitions on women in military occupational specialties dealing with combat, Belkin said.

“That means that if you are born a boy and you transition to be a woman then you can’t serve in that MOS,” he said.

The lifting of the ban on transgender service is a small factor pushing gender equality in the ranks forward, but the military has many other reasons to resolve the role of women.

A solution to any differences in the treatment of transgender troops and women in combat jobs would be to open the positions to anyone who can hack it physically, said Evan Young, a retired Army major and president of Transgender American Veterans Association.

“I think we’re just trying to catch up with society and what the rest of the world is doing. I feel like we’ve been behind the times and we’re finally catching up with everyone else,” he said.

Army Capt. Sage Fox served as a man and then briefly served after transitioning to a woman before being put on inactive duty. She said she hopes the inclusion of transgender people will continue to nudge the military toward a system where troops are evaluated for jobs based solely on ability and not gender.

“The fact that I’m a female now should not be a disqualifying factor. It should be, can I do the job?” Fox said.

For King, the active duty infantry soldier, fighting next to the most qualified people, regardless of their gender, is not only about fairness — it’s about staying alive.

“It’s a dangerous place and we need people who know how to do the job.”