‘Tough as nails’ veteran urges focus on fitness, not wounds 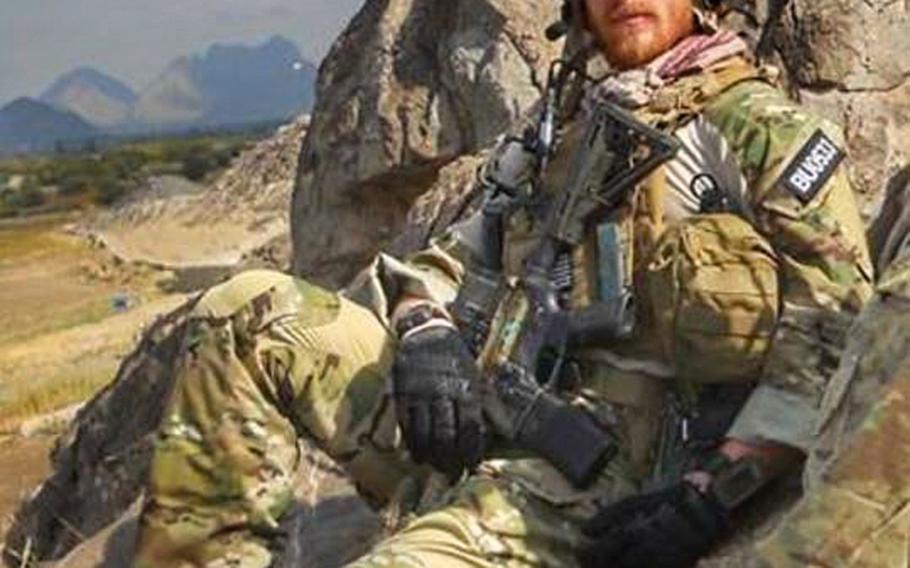 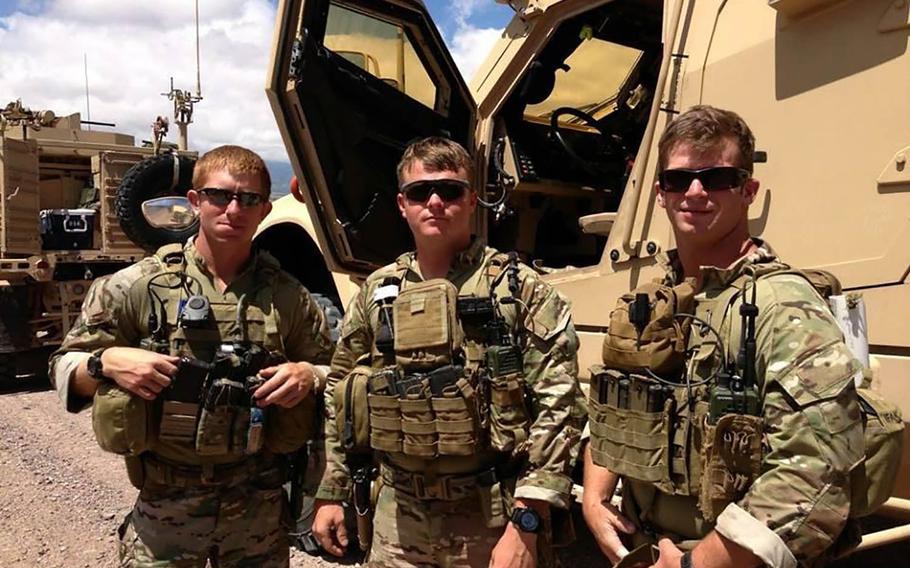 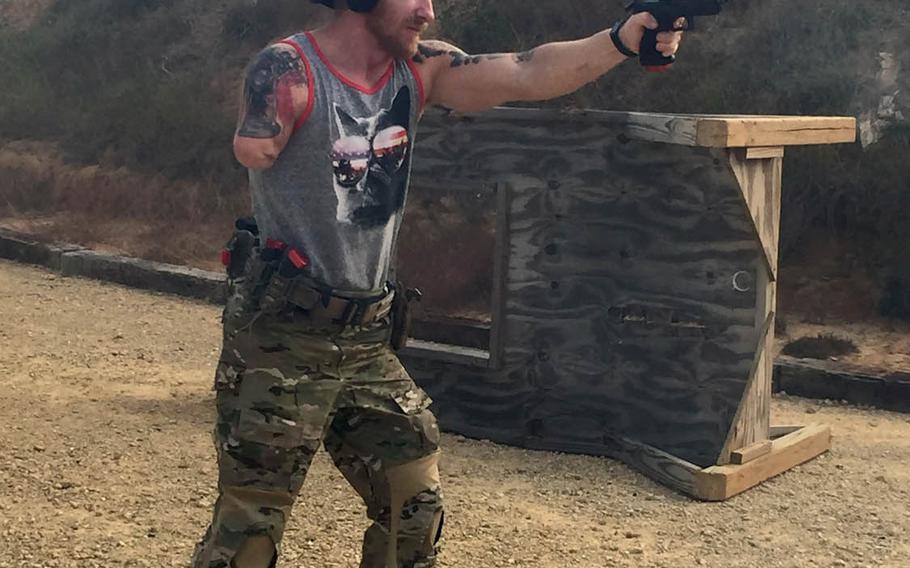 Jared Bullock, a former Green Beret, and his wife Jesica stand outside Foundry Athletics, a gym they opened May 19, 2018, in Carterville, Ill. (Photo by Tim Kolczak)

It was one month into his fifth deployment, and the Green Beret and a team of soldiers were riding in an all-terrain vehicle in Kandahar when it ran over an improvised explosive device. Bullock woke up in Landstuhl Regional Medical Center in Germany, where he learned he’d lost his right arm above the elbow and his right leg above the knee.

His injuries left him wondering what was next for him, after 10 years in the Army doing a job that he loved.

“Honestly, the first moment realizing my career was over was when the medication in the hospital had worn off enough to be like, ‘Oh sh--. I’m missing body parts’,” he said. “I’d worked hard to get to where I was. What was I supposed to do now? Because it isn’t this anymore.”

Bullock, then 30, said he decided in that moment that he could feel bad for himself or he could move forward.

“There’s no choice to it. I put myself in the situation I’m in,” he said. “Sure, I could blame bad guys all day. But, in the end, I signed the paper that said I volunteer to serve this country.”

Bullock enlisted in the Army with his twin brother Kyle in August 2003. He deployed to Iraq twice, then to South America a couple times before that final deployment to Afghanistan with 3rd Battalion, 7th Special Forces Group, out of Eglin Air Force Base in Florida.

Bullock’s recovery was grueling. He was flown to Brooke Army Medical Center at Fort Sam Houston in Texas, where he said he underwent more than two dozen surgeries.

Athletics was always a big part of his life. His competitiveness came from growing up with three brothers and continued during his time in the Army.

Bullock used the time recovering to search the Internet, and came across videos of athletes with prosthetics running races.

“I didn’t even know what prosthetics looked like. It’s just not stuff you think about,” he said.

He found one man with similar injuries who took about five years recover. Bullock was determined to do it in one.

“I was like, I’m a [Special Forces] dude, super competitive. I’ll do it in half the amount of time he did to recover,” he said.

So Bullock turned his energy to fitness – for his recovery, which developed into helping train kids and ultimately his new career as a gym owner in Illinois.

Trial and error “Tough as nails” is how Keith Reeves, Bullock’s uncle by marriage, describes him. “The extent of his injuries, a lot of people would shy away from it. He’s trying to tell people, your life doesn’t end, it doesn’t stop. You just have to make the adjustments.”

Two months before Bullock’s required year in rehabilitation ended, he completed his first Tough Mudder race, an event with a 10-12-mile run and various obstacles to overcome.

“I’d seen a bunch of people, like amputees, doing them,” he said. “I gave myself goals. You’ve always got to have goals.”

Bullock watched online how other amputees were modifying gym equipment and coming up with ways to continue to train and work out. Bullock knew he could find better methods.

“Ninety percent of the time it’s just me experimenting,” he said. “It’s a lot of trial and error. It pays off.”

It led Bullock to volunteer with children missing arms and legs through NubAbility Athletics Foundation, an Illinois nonprofit dedicated to coaching kids so they can participate in mainstream organized sports.

After his first race, Bullock ran 10 more of different varieties and challenges. He got into competitive bodybuilding, further adapting fitness and weight-lifting equipment to better suit his post-injury body. He began posting his own workout videos and photos online, drawing more than 65,000 followers on Instagram.

But after a while, Bullock said he got tired of the attention directed at what he didn’t have — an arm and a leg. So, after just one competition, he quit bodybuilding.

“I was doing it just for me. After the first one, people made too big a deal out of it. Like, ‘Oh look how amazing and incredible this is.’ I really don’t care about your pity,” he said.

He deleted the Instagram account. He didn’t like the way coming up with new posts consumed his thoughts, even during time with his wife, Jesica, and 8-year-old son Aidan — or that he kept finding his posts reused on other military pages.

Reeves said Bullock doesn’t want people to see him as different; he wanted them to focus on the fitness, athleticism and inventiveness behind what he was doing — not the injuries.

“If you ask him if he’s disabled, he’ll tell you no,” Reeves said. “I’ll help him if he needs help, but otherwise, let him figure it out. I think that’s sort of the way he wants it.”

A second career After spending about a year at home in Crestview, Fla., living the retired life, Bullock decided he wanted to work again, doing something to fill time between family and physical training. But he also knew he had to be passionate about whatever he did.

“I thought, ‘You know what? Why not do a gym?’ I talked to my wife and she said let’s do it. It was never on our plate of things to do. It wasn’t always a future goal in life,” he said.

In June 2017, the Bullocks moved back home to Illinois and began looking for land. Using bank loans and savings, his gym began to take shape.

Nearly one year later, on May 19, Bullock opened Foundry Athletics in Carterville, Ill., an hour north of his hometown of Metropolis. He described it as a traditional monthly membership fitness center with any equipment a person could want, whether for CrossFit, cardio or weight training.

“For the time being, I’m super invested in getting things going and making sure it’s running smooth,” Bullock said. His wife took time from her job as a registered nurse to pitch in. Occasionally their 8-year-old son Aidan tags along and hangs out behind the welcome desk.

Bullock chose to open his gym in Illinois to be part of a community.

“In the military, you move around a lot. You don’t really get a chance to stick around and make an impact,” he said. “Now my kid will be in same school system until he graduates.”

Foundry Athletics is open six days a week, and Bullock is there just about every day — ready to help members learn new ways to use equipment, break down mental barriers and achieve their goals, or chat about the military.

“Folks come in here and they want to go into the service, I have the background to work with them,” he said. “Not just in training, but from a mentor aspect. I can be someone besides a recruiter to ask questions about what it’s really like.”

Reeves said as soon as he heard about plans for the gym, he was ready to jump in for Bullock. Using his background in construction, Reeves helped with a lot of the woodworking inside the facility.

“The gym, it’s a different looking gym because we did an old barn look in it,” Reeves said.

Reeves said Bullock’s focus as a business owner is incredible — just as it was during his early days of recovery.

“When he got injured, he said, ‘This does not define me.’ He hasn’t let it define him,” Reeves said.

“I’m not saying I’m getting old, but running, as an amputee, beats you down a little more and recovery takes a little longer,” he said.

His new goal is to stay healthy enough to play baseball with his son.

Perseverance is a part of Bullock’s recovery and success, but he believes his Special Forces training had something to do with it too.

“That’s the way they train you. You don’t stop, you don’t back down and you keep going to get it done,” Reeves said. “That’s the way he does it. That’s where the military part comes through, but you’ve got to have that personality in the first place.”