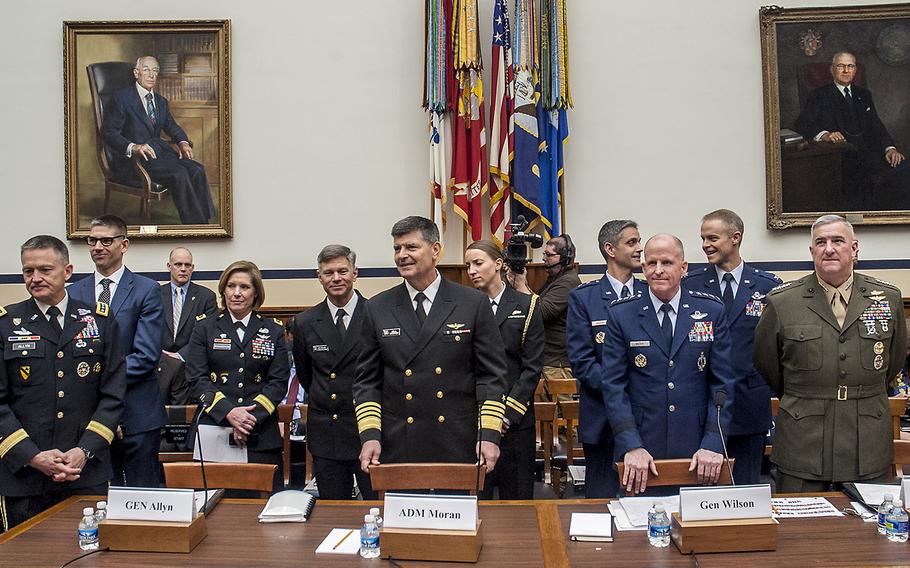 But what most struck committee Chairman Rep. Mac Thornbery, R-Texas, he said in an interview Monday, were the grim details service leaders are ready to share.

“We’ve been focusing on this readiness issue for some time, and the answer we always got back from the Pentagon was, ‘Oh, this is not really a problem,’ ” said Thornberry. “Now you see the services freer to talk about the problems.”

“That’s what concerns me,” he continued. “That we had this resistance to there even being a problem. And now it’s gotten so bad [with] stories and statistics you heard across the board last week. That’s the worst thing. That we have let this problem get so bad because it was politically inconvenient to deal with it.”

Service leaders had complained often about the strain of defense cuts over for a decade due to the 2011 Budget Control Act. They also criticized the congressional crutch of starting every fiscal year under a continuing budget resolution — which freezes spending and blocks new programs — simply because lawmakers can’t pass appropriations bills on time. It’s happening again for a ninth straight year. Five months into fiscal 2017, service budgets remain capped.

But the four-stars who testified last week described the crisis in fuller detail, comparing 2017 to the “hollow force” era of late 1970s. They pointed to shrunken fleets of aging ships and aircraft, deteriorating infrastructure, and shortages of pilots and aircraft maintainers. Manpower strength has been cut so deep that the U.S. military can’t fulfill the national strategy, if broader wars break out, to defeat one near-peer adversary and to check the aggression of another.

Thornberry suggested the openness stems from a new president promising to restore readiness and his party holding majorities in both chambers of Congress.

“No question there was tremendous political pressure on them to basically downplay readiness concerns, to not [say] anything that would justify an increased budget last year. And it put them in a bad place.”

The vice chiefs don’t sound restrained now. Each said their service branch is too small to meet rising worldwide threats. Here are other highlights:

Army – Only a third of its brigade combat teams and a quarter of combat aviation brigades are deemed “ready” with enough troops, training and equipment to deploy within 30 days. Only three of 58 brigade combat teams are fully ready and able to “fight tonight,” said Gen. Daniel B. Allyn, vice chief of staff.

The Army can meet wartime requirements in defense planning only at “high military risk.” Forces forward and civilians will suffer higher casualties because reinforcements “arrive too late,” delayed by gaps in training and equipment.

Allyn blamed small budgets and high operational tempo. The Army budget to modernize equipment is $24.8 billion, half what it was in 2009. Posts report $11 billion in deferred maintenance as infrastructure deteriorates.

Congress voted to stem the drawdown last year so Army strength will climb by a 1,000, to 476,000, rather than fall to 450,000 as former President Barack Obama requested. But Allyn and the other vice chiefs pleaded for immediate repeal of the Budget Control Act and urged lawmakers to properly fund” that bigger force authorized.

“Unless this is done, additional topline and [wartime contingency] funding,” he warned, “will prove unsustainable, rendering all your hard work for naught.”

Navy – “Your Navy today is the smallest it’s been in 99 years,” said Adm. William F. Moran, vice chief of naval operations, with 275 ships versus 319 on 9/11. Maintaining that smaller fleet is an urgent need, he said, but its “busier than ever.”

Besides the war on the Islamic State group, Navy must counter threats from North Korea and Iran, and provide presence against rising naval growth by Russia and China. The cost of sustaining ships forward is declines in future force readiness. Yet only 40 percent of combatant commander requests for naval forces are meet, Moran said. High demand means rising maintenance costs and more time spent in shipyards.

Naval aviation feels the squeeze too. Fifty-three percent of Navy aircraft cannot fly, twice the historic norm. Sixty-two percent of the legacy Hornet fighter/attack aircraft are out of service either for major repair (27 percent) or maintenance (35 percent). Designed for 6,000 flight hours, Hornets are being maintained to fly up to 9,000 hours. That takes twice as many man hours of maintenance. Replacement aircraft, F-35 Strike Fighters, are arriving seven to eight years later than planned, Moran said.

Without an immediate budget hike, Moran warned, the Navy within a month will have to shut down some air wings, defer maintenance on several surface ships and slow critical submarine maintenance. Recently, it decertified a submarine from diving due to unmet nuclear maintenance. And attack submarine Albany spent 48 months laid up because its repair dollars had to be diverted to higher priority ballistic missile submarines to keep them on schedule.

Depots and shipyards still haven’t recovered from furloughs caused by 2013 budget sequestration when workers with vast experience left or retired. Many new workers were hired but they lack experience so shipyard production fell.

“At our public shipyards roughly 50 percent of our civilian workforce has less than five years’ experience. When we’re talking maintaining nuclear-capable ships, that’s not necessarily a good place to be,” Moran said. It’s one reason why aircraft carrier Bush was 141 days late relieving Eisenhower in the Persian Gulf last year.

Air Force – “Non-stop combat, paired with the budget instability and lower-than-planned top lines, has made the United States Air Force the smallest, oldest equipped and least ready in our history,” said Gen. Stephen W. Wilson, Air Force vice chief of staff. To maintain deployed readiness, the Air Force is sacrificing future modernization and readiness. “We need to act now, before it’s too late,” he said.

The average age of Air Force aircraft is 27 years, requiring more time for repairs and lowering pilot satisfaction. The Air Force is short 1,555 pilots and 3,400 aircraft maintainers. In 1991, for the Persian Gulf War, it had 500,000 active-duty personnel and 135 fighter squadrons. Today it has 317,000 personnel and 55 fighter squadrons. Still, fighter pilots fly fewer hours and sorties than did pilots during the late 1970s.

“We think it will take six to eight years to bring our readiness levels back where they need to be,” said Wilson.

As one example, he said, Marine fighter pilots need 16 to 18 flight hours a month to maintain minimum requirements and perhaps 25 hours to be called proficient and able “to defeat the enemy in a near-peer fight,” Walters said. They get only 12 to 14 flight hours under current budgets. So, in a major combat operation, many pilots would deploy inadequately trained.

Marines have a backlog of more than $9 billion in deferred maintenance. Only 7 percent of its current budget goes to modernize weapon systems versus 15 percent historically spent on new aircraft and ground vehicles.

“Due to years of fiscal constraints, the Marine Corps is fundamentally optimized for the past, and has sacrificed modernization and infrastructure to sustain our current readiness posture,” Walters said.

In our interview, Thornberry said his committee awaits the administration’s request to amend the fiscal 2017 budget. One possible target he suggested is to restore $18 billion in defense spending authority that his committee had approved last year before it fell away during negotiations with the Senate.

But Thornberry said he also heard a “rumor” that the proposed defense budget amendment will include funding for homeland security too, perhaps billions of dollars earmarked to begin to build the wall on the U.S. southern border.

Could that sideline some needed defense spending?

“We should never get to a point where we are pitting one element of our country’s security against another,” said Thornberry. “We’ve got to protect the country both at the border and also support adequately the men and women who are out there defending us all around the world.”