Then-Spc. Felipe Pereira on patrol in Senjaray, Afghanistan, in early 2011, several months after being seriously wounded in a Nov. 2010 attack outside his base. Pereira, now a sergeant, was awarded the Distinguished Service Cross for helping to evacuate other injured soldiers from the attack site while under fire. (Courtesy of the U.S. Army)

Then-Spc. Felipe Pereira on patrol in Senjaray, Afghanistan, in early 2011, several months after being seriously wounded in a Nov. 2010 attack outside his base. Pereira, now a sergeant, was awarded the Distinguished Service Cross for helping to evacuate other injured soldiers from the attack site while under fire. (Courtesy of the U.S. Army) 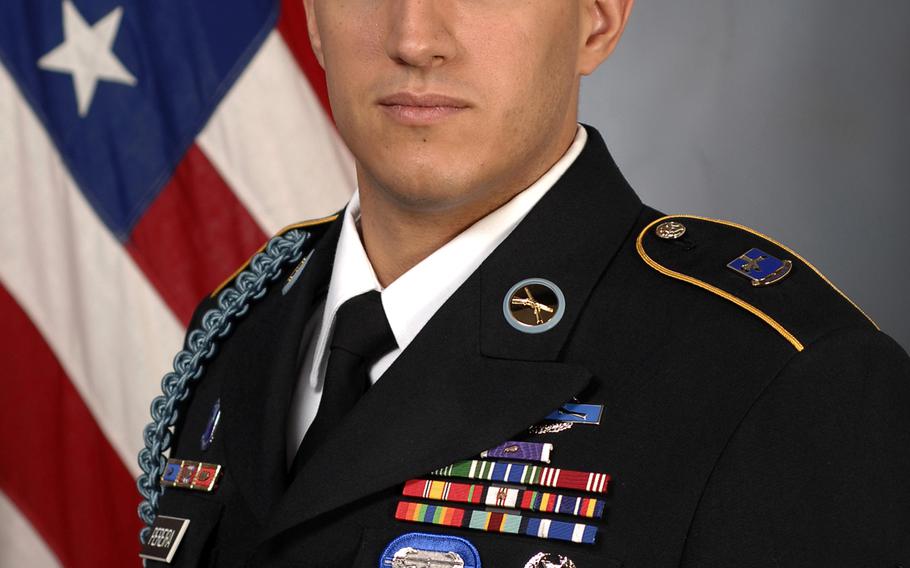 Sgt. Felipe Pereira was awarded the Distinguished Service Cross for helping to rescue wounded members of his unit while under attack during a Nov. 2010 patrol in Senjaray, Afghanistan. ()

The only hint Felipe Pereira had that anything would go wrong that chilly November evening was his intuition — a nagging feeling that somebody had planted a pressure plate in the corner of a field his team patrolled on foot each day.

To be safe, he decided to vary the path his squadron normally took, weaving through the middle — rather than along the perimeter — of the expanse that separated Combat Outpost Senjaray from a small valley city of the same name in Zhari district.

“I thought, there’s no way they’re going to plant an IED right here in the middle of the field,” said Pereira, 26, a Brazilian-born specialist with the 502nd Infantry Regiment, 2nd Brigade Combat Team, 101st Airborne Division.

Pereira’s strategy that day seemed to work. The patrol passed uneventfully, and the squad soon made its way back toward the outpost. A motorcyclist approached the squad, but followed Pereira’s hand signals to turn off the motor, even smiling and reaching out to shake the specialist’s hand when Pereira checked his pockets and the shiny bike for explosives.

The soldiers were walking up a hill within sight of the base when they heard what Pereira would later describe as “the biggest explosion ever.”

“It was like a baseball bat hit me in the legs,” he said.

Pereira realized his gut feeling had been right; somebody must have stepped on a pressure plate and triggered an IED. What he had been wrong about was its location.

He looked down; his legs were bleeding badly. But they were still there.

Then the shooting began.

The next 45 minutes was a chaotic scramble to help his wounded men to the safety of the outpost just behind them while taking fire on three sides. One of Pereira’s legs was going numb and he struggled to breathe as he raced from one injured soldier to another.

“You could see these (Taliban) running in and out of the market and taking potshots,” he said. “Some of these guys were hidden in the woods, too. Things were going south pretty fast.”

Needing a way to transport the wounded, he ran inside the base and commandeered a beat-up all-terrain vehicle, an open-air John Deere Gator used to haul tools and trash across the base.

“That thing was bare bones,” he said. “It was nothing you would ever take to combat whatsoever.

“A machine gun on back would have been nice.”

He made two trips into the fray while under heavy fire, providing suppressive fire so other soldiers could bring the wounded back to the ATV. Back at the outpost, he had just enough strength to take his helmet off before he collapsed, with shrapnel wounds to his spleen, liver and left lung.

At the hospital, he would learn that the blast had come not from an IED, but from the motorcyclist, whose bike had been packed with explosives. The explosion was so powerful that fragments of the man’s spinal column were found 300 meters away inside the base.

The motorcyclist’s role in the attack still puzzles Pereira, who described him as twentysomething, clean-shaven except for the requisite beard worn by Afghani men, “just a total average-looking guy that I’ve seen in the market over and over.”

The man showed none of the telltale signs that Pereira had been trained to look for in a motorcycle bombing: An old motorcycle that the Taliban would be willing to lose in an explosion. Exposed wires. A suicide bomber wearing nice clothes, probably in all black or white, so he would look his best when he met Allah.

Looking back, Pereira believes he can pinpoint the moment the attack began. After shaking the motorcyclist’s hand, he began walking away, heading toward the outpost. He heard the man turn the bike’s engine on, and — from a distance — Pereira motioned for him to turn it off.

The motorcyclist smiled and nodded. The bike exploded seconds later.

“A person who knows he’s about to die, I assume there would be some kind of nervousness about him,” Pereira said. “But he was so nice and calm that I honestly don’t believe that it was a self-detonation. Somebody told him, just go out to the Americans and make sure the bike is on. If he did it himself, he completely fooled me.”

Pereira, after recuperating, would go back on patrol a month later.

“I had people tell me, ‘Man, you’ve already paid your dues, go home now,’ ” he said. “That was one day. I don’t want to be measured for the rest of my life against one day. I’d been in so many firefights prior to that. I was in so many firefights after that. But I wouldn’t feel right as a man to go home and let the other guys stay there.”

Pereira, who immigrated to the U.S. when he was 17 to attend college and became a U.S. citizen shortly before deploying to Afghanistan, was awarded the Distinguished Service Cross for saving the lives of two soldiers that day. Two others were killed instantly in the explosion.

Now a sergeant in the ready reserves, Pereira, 29, lives in Memphis and is training to be a police officer. He said he struggles with survivor’s guilt and feelings of responsibility for letting the suicide bomber get so close to his men, and believes he wouldn’t have survived if his squad hadn’t acted as one unit.

“I couldn’t care less about my medal,” he said. “I’m tremendously proud of it, but if there’s one thing we could take out of this entire thing is the sacrifice of those who never came back. They’re the real heroes.”