‘The Reawakening of Mage Axum’ 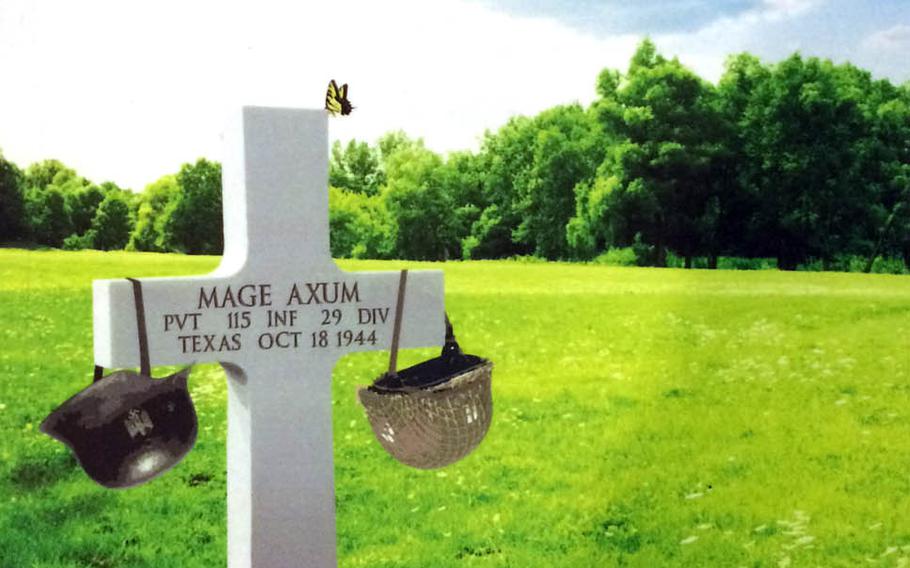 "The Reawakening of Mage Axum" is in many ways a tribute to the author's great uncle, who died in an attack on a German town in 1944. (Courtesy of Tucker Axum III)

In a better world, a young man doesn’t leave Palestine, Texas, armed with a rifle and bound for Germany.

He stays with his wife and daughter, maybe has another child or two and finds steady work to support them, continuing on to a ripe old age and cherishing the memories of a life well lived.

It’s what could have been for so many Americans like Pvt. Mage Axum, who in real life never came back home from World War II.

“The Reawakening of Mage Axum,” Tucker Axum III’s first novel, is in many ways a tribute to his great uncle, who died in an attack on a German town in 1944. It’s also a tale of how otherwise ordinary lives get caught up in the swirl of history, and all of the good and bad that can come of it.

The story begins with a supernatural twist borrowed from films like “Heaven Can Wait.” Mage Axum dies, only to find out upon his ascent to heaven that he isn’t supposed to be dead. His body beyond repair, Axum’s spirit is returned to the body of another dead soldier, James Karl.

As Karl, Axum goes back to his hometown. But his reawakening inevitably leads him on a far different path than he would have taken — one filled with adventure, travel, romance and further brushes with historic events.

“He knew the preciousness and value of life, and he took full advantage to make the most of it,” Tucker Axum said of his lead character, in a conversation at Yokosuka Naval Base, Japan, where he works as a special agent for the Naval Criminal Investigative Service.

The reawakening aspect arose from the author’s real-world concerns. Mage Axum’s daughter is still alive, and Tucker Axum didn’t want to open an old wound by showing Mage returning to his family.

Axum’s fascination with his relative was spurred by an unlikely, but serendipitous, sequence of events.

Axum had returned to Lafayette, La., where he was raised, to earn his multi-engine pilot’s license. He spoke with a college professor there interested in genealogy, who did some research on the Axum name that reminded Tucker about Mage.

Tucker Axum had always known he had a relative who died in the war, but little more.

Shortly afterward, Axum walked the grounds of Normandy American Cemetery while on a protection detail for a Navy admiral. Amid the memorials, Axum met a tour guide from, of all places, Lafayette.

“He was the one who told me how I could request Mage’s official military records,” Axum said. “Once those records came in, I was amazed by the amount of information and the story behind his disappearance and discovery.”

Stars and Stripes wrote in 2013 how Tucker Axum’s journey to learn about Mage led him to a farm in Buscherheide, Germany. The farmhouse still had bullet holes from the war; old ammo boxes and helmets remain laying around the countryside.

He spoke with a farmer, who, as a boy, found a grave there that he thought contained a German soldier. A few years later, an investigation revealed that it was Mage Axum, who was re-interred at a war cemetery in Belgium.

The farmer, along with the 90-page personnel file Tucker Axum received from the U.S. government, gave Mage’s daughter far more than she ever knew about her father.

“She told me it brought her closure,” said Tucker Axum, whose friends told him he should write a book about it.

Axum considered a nonfiction account, but there was a major stumbling block. Although he learned that the Army had launched an offensive to retake Buscherheide against heavy German resistance, he found no account of how Mage Axum died.

In the meantime, Axum reflected on how far away and seemingly random events altered the course of Mage’s life. The result, after eight months of writing after work and on weekends, is at its core a story of second chances — and how those of us lucky enough to get them might go about getting things right on the next go-around.

The second edition of “The Reawakening of Mage Axum” is now available at Amazon.com in Kindle, paperback and hardcover editions.