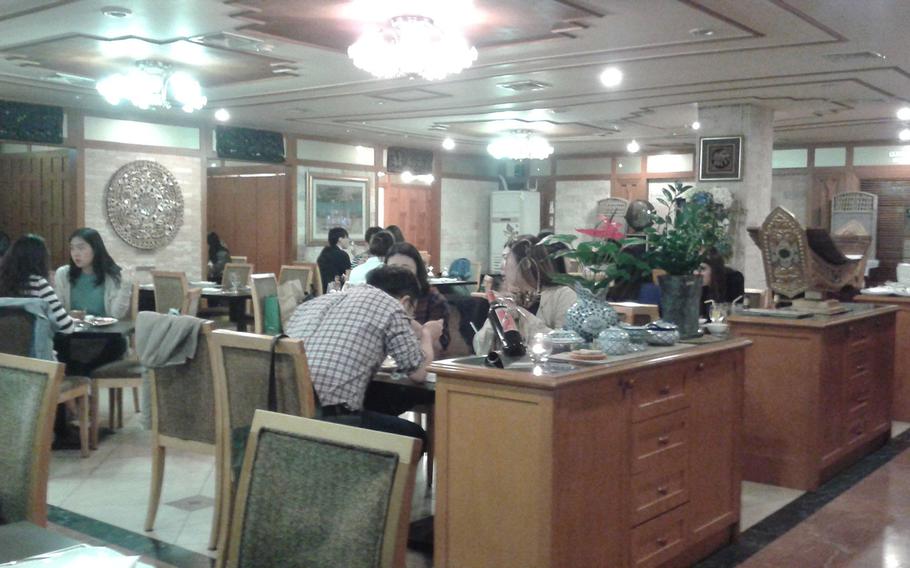 In the Itaewon district of Seoul, South Korea, there are dingy expat watering holes, trendy craft beer pubs and chic restaurants with loud thumping music and tiny portions that belie the hefty bills that follow.

But since having our first baby, we have found the number of places where my little family can dine out without feeling uncomfortable — either because of the amount of alcohol served, lack of space for all the gear that accompanies an infant or the possibility of wails disrupting someone else’s pricey dinner — has shrunk to a mere handful.

One of them is Thai Garden, a nearly 20-year-old standby in a neighborhood where restaurants seem to come and go nearly as quickly as soldiers on one-year tours.

While Itaewon is home to several Thai restaurants similar in appearance and menu, Thai Garden bills itself as the “first and best.” I can’t verify that claim, but as a long-timer in Seoul, I can confirm that it’s popular enough to maintain a steady stream of customers over the years.

Most importantly — aside from the three flights of stairs you have to climb to get to the eatery above the popular High Street Market — it’s family friendly.

We lugged baby and stroller up the stairs into what, with its bright lighting and open floor plan, vaguely resembled an upscale, Asian-themed cafeteria.

The clientele was a hodgepodge: expats and Koreans, businessmen and young couples, and even a few other families with babies and young children in tow.

Most main dishes range from about 13,200 to 29,000 won, with appetizers like fried spring rolls and satay meats with peanut sauce generally costing about 8,000 to 12,000 won. Desserts go for 5,000 to 5,500 won and include Thai mainstays like mango with sticky rice and steamed banana in coconut milk. Dishes are served family style, on large platters that make for easy sharing.

We started with the plah goong (16,500 won), a spicy, lemongrass-accented mix of shrimp, herbs and vegetables that was listed in the menu’s salad section but was large and substantial enough to be a main dish.

For the main course, we split the goong pad nam prig pao (26,400 won), a mix of shrimp with roasted chili paste, celery, onions and chilis, along with the pad pak ruam prig khing (13,200 won), a simple but tasty dish of vegetables stir-fried with curry paste and kaffir lime leaves.

Our meal disappeared in a hurry — not so much because it was delicious, which it was, but because our son decided, loudly, that nobody should be eating Asian food when there was milk to be had.

But Thai Garden scored its biggest points with these harried parents by simply treating us as if we had not walked in the door carrying a cranky little alien. Nobody shot us a second look as we walked our squirming bundle of joy back and forth across the restaurant in a vain attempt to quiet him or as we took turns giving Junior a bottle with one hand while unsuccessfully wolfing down our dinner with the other.

Our server wrapped up our half-eaten meals when we decided it was time to make a quick exit and graciously pretended not to notice all the rice and veggies I had managed to spill in my lap.

We just hope that the next time we’re back, the tyke gives us time to at least eat half a dessert. And that someone installs an elevator.

Thai GardenDirections: From Itaewon Station, take exit 2. Walk straight about 10 minutes, past the Itaewon Boutique Hotel, until you reach a three-way intersection. Thai Garden is the on third floor of the building that will be on your left.