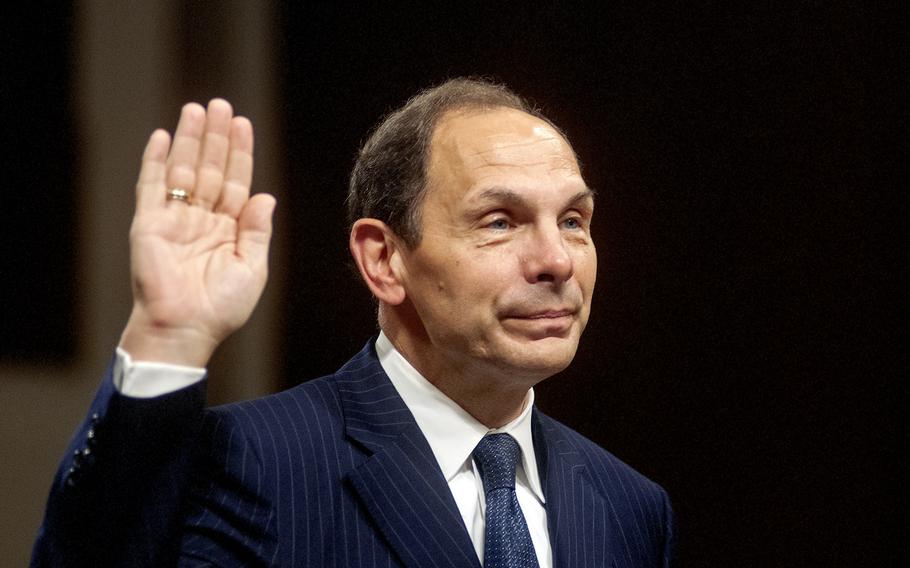 At his confirmation hearing July 22, 2014, then Secretary of Veterans Affairs nominee Robert McDonald raises his hand for an oath before testifying before the Senate Committee on Veterans Affairs. On Wednesday May 25, 2016, Sen. Ted Cruz joined a growing chorus of lawmakers calling for McDonald's resignation. (Carlos Bongioanni/Stars and Stripes)

At his confirmation hearing July 22, 2014, then Secretary of Veterans Affairs nominee Robert McDonald raises his hand for an oath before testifying before the Senate Committee on Veterans Affairs. On Wednesday May 25, 2016, Sen. Ted Cruz joined a growing chorus of lawmakers calling for McDonald's resignation. (Carlos Bongioanni/Stars and Stripes) 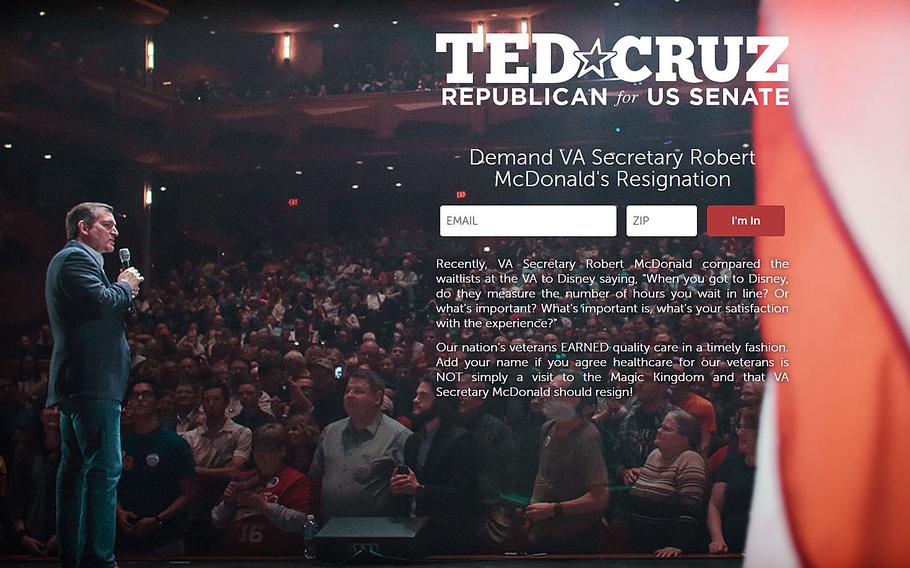 WASHINGTON — Former presidential candidate Ted Cruz began a petition Wednesday calling on Bob McDonald to resign despite a public apology from the Department of Veterans Affairs secretary for comparing the wait for veterans’ health care to the lines for Disney amusement-park rides.

The Republican senator from Texas, who put the petition on his election campaign website, said McDonald’s comments show a “fundamental lack of respect” for the millions of veterans who seek care at the department’s nationwide network of hospitals and clinics.

The VA secretary caused a firestorm of criticism on Capitol Hill and was forced to apologize late Tuesday after downplaying the VA’s need to focus on how long veterans must wait to receive treatment. He cited Disney’s focus on overall visitor satisfaction as a better model for the problem-plagued department.

“At this point, there can be no doubt there is a deep corruption within the VA, and we should not rest until it is rooted out, and our heroes receive the care that they earned,” Cruz said in a statement. “Secretary McDonald’s recent comments make clear that he is not the man to ensure that happens and as a result he should resign.”

Many more lawmakers, including the House Republican leadership and chairmen of the House and Senate veteran affairs committees, said they expected an apology from the secretary.

McDonald appeared defiant Tuesday afternoon during an appearance on a cable news program, but as the outrage grew, he issued a statement a few hours later saying he regretted the Disney comments.

“If my comments Monday led any veterans to believe that I, or the dedicated workforce I am privileged to lead, don’t take that noble mission seriously, I deeply regret that. Nothing could be further from the truth,” the statement said.

During a breakfast with reporters, McDonald had claimed Disney does not focus on how long visitors wait in line and that the VA should not either. He has often cited Disney as an inspiration for the VA, the country’s second largest federal bureaucracy.

“What we should be measuring is the veterans’ satisfaction. I mean, what really counts is how does the veteran feel about their encounter with the VA. When you go to Disney do they measure the number of hours you wait in line?” McDonald said. “What’s important is your satisfaction with the experience, and what I would like to move to eventually is that kind of measure.”

The VA was thrust into the worst scandal of its history in 2014 when whistleblowers exposed long and potentially dangerous wait times at veterans’ hospitals. Federal auditors also discovered the department was systematically covering up the waits. Recent audits have found that delays in care remain.

The Disney comments were the second major gaffe for McDonald, who was brought in two years ago to fix what many people viewed as a broken department.

In February 2015, McDonald told a homeless veteran, “I was in special forces.” But his VA biography showed the West Point graduate and Army Ranger served in a unit that was not part of special operations forces. McDonald apologized for the “inaccurate” comment during a news conference in front of VA headquarters.

The previous VA secretary, retired Army Gen. Eric Shinseki, was forced to step down amid the wait-time scandal in 2014.