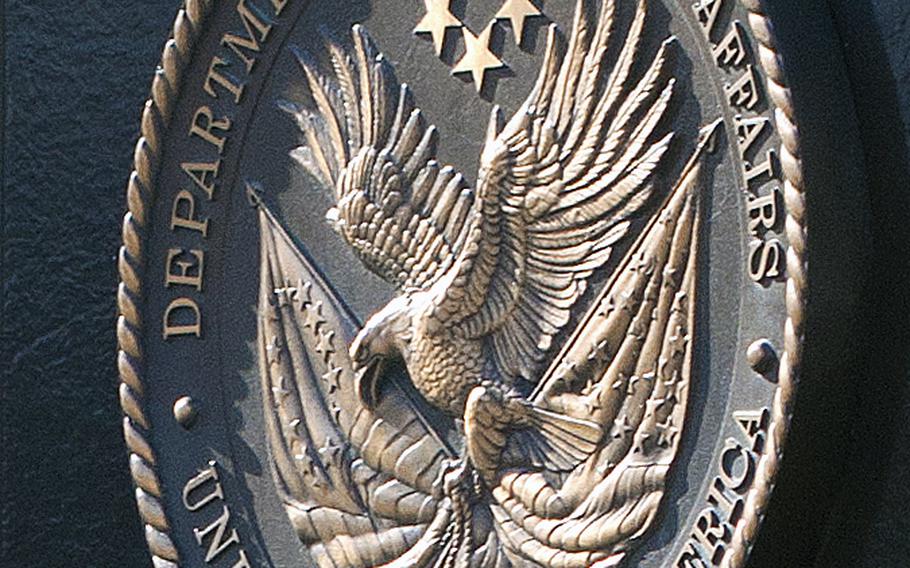 The Department of Veterans Affairs decal is seen outside the VA's headquarters in Washington, D.C. (Carlos Bongioanni/Stars and Stripes)

WASHINGTON — Nearly 30,000 post-9/11 combat veterans – some of whom have been waiting for years – are still without Department of Veterans Affairs health benefits due to a technicality more than three months after a whistleblower brought the issue to light.

VA officials apologized but say they do not have the authority to automatically enroll the veterans, even though they filled out the proper paperwork and are guaranteed at least five years of enhanced care by law.

At issue is an optional means test, which the veterans in question did not fill out. The free care they are guaranteed by a 2008 law does not require them to fill out the means test, but without that information, their applications are automatically placed into “pending” status. When VA program specialist Scott Davis first reported the issue in August, 35,000 combat veterans were on the pending list, half of whom had waited five years or more to be enrolled.

The VA did not start reaching out to the veterans until Davis publically reported the problem, and now says there are about 29,000 Iraq and Afghanistan veterans in pending status. Benita Miller, director of the VA’s Health Eligibility Center, said the VA had enrolled 9,000 servicemembers since August. (Roughly 3,000 new veterans applied in that time.)

Miller said her office is continuing to reach out to veterans by telephone and by mail.

The department has apologized for the problem but also said the system is working as designed and that the vets need to specifically opt out of the means test to move forward, to show that they accept the potential of co-pays.

VA Secretary Bob McDonald has repeated the assertion that he does not have the authority to change a veterans enrollment status.

Davis, who handles the enrollment applications, refutes the VA claim that the department cannot automatically enroll the veterans and says they have in fact done just that in the past.

“Those combat veterans are clearly applying for health care; we have always just enrolled the people without asking questions,” he said. McDonald “has a moral, legal and ethical responsibility to enroll these veterans.”

When asked by a Stars and Stripes reporter whether VA lawyers had specifically given guidance that the department could not enroll the veterans, Miller demurred. “We didn’t have the guidance to make an agreement to enroll them in VA health care,” she said in a phone interview with Stars and Stripes.

The House Committee on Veterans Affairs requested that the VA provide information by Friday about the combat veterans on the pending list, including the list of veterans who may have died while their enrollments were still pending, but they did not receive the information, according to a committee official.

“The law hasn’t required a means test from recent combat veterans since 2008, yet VA still hasn’t come up with an efficient way to enroll these veterans in its health care system without one,” committee Chairman Rep. Jeff Miller said in a statement. “This is either blatant incompetence or cold-hearted indifference.”

Benita Miller said her team was still compiling the data and did not have statistics on the number of veterans who may have died while awaiting enrollment.

Davis said VA’s reluctance to automatically enroll the veterans could be about potentially being responsible for tens of millions of dollars in compensation owed to veterans for the delayed benefits. VA officials would not comment on what kind of compensation, if any, veterans might be owed.

If you believe you might be one of the combat veterans affected, you can call 877-222-8387 or visit the VA's Health Benefits page